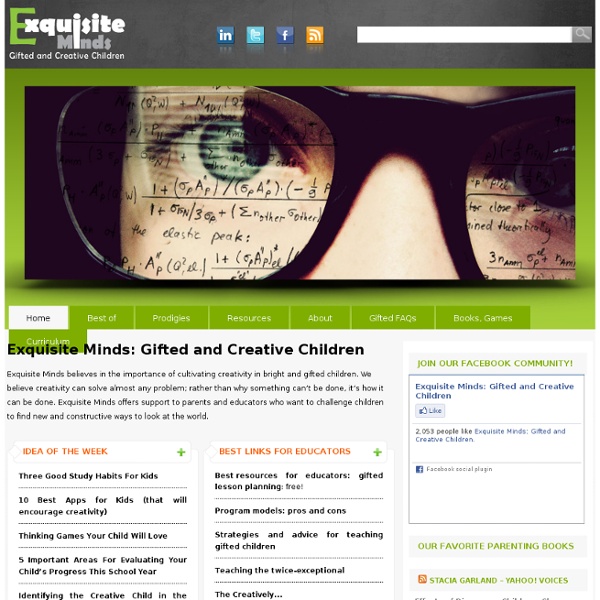 Creativity across the life-span: A systems view Csikszentmihalyi, M. Talent Development III, pp. 9-18 Gifted Psychology Press 1995 This article by Mihaly Csikszentmihalyi looks at three major issues related to creativity over a lifespan. Teaching critical thinking Benjamin Bloom (1956) created this taxonomy or classification system for categorizing "competencies" in educational settings, as defined by skills demonstrated by learner type or intelligence. This breakdown provides a useful, incremental framework of complexity in demonstrating mastery of a subject or topic. The verbs include the skills that demonstrate each:

Intellectual Giftedness Intellectual giftedness, often referred to as high IQ, is usually given short shrift when it comes to considerations of the special needs of exceptional people. Because giftedness appears on the surface to be nothing but an advantage, the challenges it presents are often ignored and unknown. Giftedness is not about being better, it's about being *different*. A gifted person's life experience is significantly different from the norm. Myths About Giftedness ~ by Mary Rocamora, M.A. ~ There are many myths about the gifted that are held in the mainstream culture. They permeate conventional parenting and our educational system, including private education. Radical thinking Are you looking for new ideas? Has your path reached a dead-end?Are your options limited, or just invisible?

IQ Basics Graph drawn in Excel using the NORMDIST function. This is a quick explanation of IQ, put up due to popular demand. There are many books on psychology or intelligence that would provide a more rigorous explanation of IQ. What is intelligence? The definition I like is that intelligence is "the ability to learn or understand or to deal with new or trying situations ... also : the skilled use of reason" (7)*.

Halo Effect The idea that global evaluations about a person bleed over into judgements about their specific traits. The ‘halo effect’ is a classic finding in social psychology. It is the idea that global evaluations about a person (e.g. she is likeable) bleed over into judgements about their specific traits (e.g. she is intelligent). Hollywood stars demonstrate the halo effect perfectly. Ask the Expert - IQ and Creativity testing for children Q: My daughter is 3 years and 9 months old. Since about a year ago she has displayed a great deal of artistic talent (at 2 yrs 9 months old she was drawing people with arms and legs and naming them). She draws pictures and labels them specifically, often asking how to spell the word so she can write it on the paper. Today she drew a "couch and chair" which was a striking resemblance of a chair at home, complete with the light that sits behind it. What type of assessment would you recommend for a child demonstrating artistic ability at her age?

Smell sensitivity varies with circadian rhythm It has always been apparent that some individuals have a better sense of smell than others, but a new study of 37 teens provides the first direct evidence that within each person, smell sensitivity varies over the course of each day. The pattern, according to the data, tracks with the body's internal day-night cycle, or circadian rhythm. "This finding is very important for olfactory perception science," said Rachel Herz, lead author of the study in Chemical Senses and an adjunct assistant professor of psychiatry and human behavior at the Warren Alpert Medical School of Brown University. "This hadn't been known before and this is the first clear, direct evidence." As one of the five senses, smell is an important ability, Herz noted, not only for experiencing and enjoying the world, but also for receiving information about danger, such as nearby fire or spoiled food, and for basic functions like eating.

It's alright Ma, I'm only Punding: Stimulants and Compulsions This post by Johanna Ryan touches on the problems of compulsive gambling and other compulsive behaviors that are linked to Abilify, SSRIs and Dopamine Agonists and also to Dopamine Agonist Withdrawal Syndrome (DAWS). It was Lester Grinspoon’s 1975 book The Speed Culture that introduced me to the concept of “punding”: a drug-induced compulsion for repetitive, sometimes elaborate but essentially useless busywork. I read it, and something clicked: “Punding” explained an awful lot about my own behavior and that of other Adderall users in 2015. The word was coined by a Swedish forensic psychologist, G. Rylander, who studied chronic IV amphetamine abusers.