Facebook says police can’t use its data for ‘surveillance’ (Dado Ruvic/Reuters) Facebook is cutting police departments off from a vast trove of data that has been increasingly used to monitor protesters and activists. 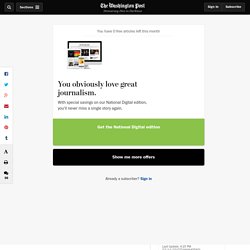 The move, which the social network announced Monday, comes in the wake of concerns over law enforcement’s tracking of protesters’ social media accounts in places such as Ferguson, Mo., and Baltimore. It also comes at a time when chief executive Mark Zuckerberg says he is expanding the company’s mission from merely “connecting the world” into friend networks to promoting safety and community. Although the social network’s core business is advertising, Facebook, along with Twitter and Facebook-owned Instagram, also provides developers access to users' public feeds. How hackers and governments can hack your smartphone camera. 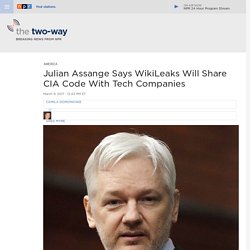 Frank Augstein/AP hide caption toggle caption Frank Augstein/AP WikiLeaks founder Julian Assange stands on the balcony of the Ecuadorean Embassy in London. Updated at 2:10 p.m. WikiLeaks will be sharing alleged CIA hacking techniques with major technology companies such as Apple and Google to allow them to develop fixes for vulnerabilities in their phones and other electronic devices, according to Julian Assange. WikiLeaks: The CIA is using popular TVs, smartphones and cars to spy on their...

Apple to 'rapidly address' security holes as tech companies respond to CIA le... Apple has promised to “rapidly address” any security holes used by the CIA to hack iPhones, following the release of a huge tranche of documents covering the intelligence agency’s stockpile of software vulnerabilities. 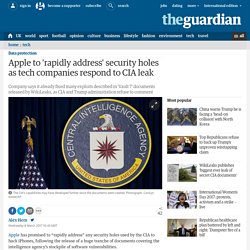 The leak, dubbed “Vault 7” by its publisher WikiLeaks, is made up of a collection of around 10,000 individual documents created between 2014 and 2016. WikiLeaks publishes 'biggest ever leak of secret CIA documents' The US intelligence agencies are facing fresh embarrassment after WikiLeaks published what it described as the biggest ever leak of confidential documents from the CIA detailing the tools it uses to break into phones, communication apps and other electronic devices. 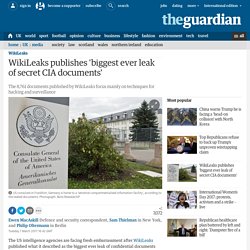 The thousands of leaked documents focus mainly on techniques for hacking and reveal how the CIA cooperated with British intelligence to engineer a way to compromise smart televisions and turn them into improvised surveillance devices. The leak, named “Vault 7” by WikiLeaks, will once again raise questions about the inability of US spy agencies to protect secret documents in the digital age. It follows disclosures about Afghanistan and Iraq by army intelligence analyst Chelsea Manning in 2010 and about the National Security Agency and Britain’s GCHQ by Edward Snowden in 2013. Apple, Microsoft and Samsung respond to Wikileaks' CIA hacking revelations. APPLE, MICROSOFT AND SAMSUNG have responded to the revelations that their products have been compromised by the CIA. 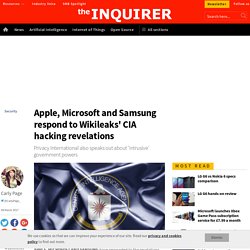 Wikileaks on Tuesday published 8,761 documents dubbed 'Year Zero', the first part in a series of leaks on the agency that Wikileaks has dubbed 'Vault 7'. The whistleblowing foundation claims the document dump reveals full details of the CIA's 'global covert hacking program', including 'weaponised exploits' used against operating systems including Android, iOS, Linux, macOS, Windows and "even Samsung TVs, which are turned into cover microphones". The documents claim that CIA's Mobile Devices Branch has created multiple tools for hacking both Android and iOS smartphones, enabling it to remotely acquire location data, audio and text communications, and to switch on the phones' camera and microphones at will.

I Am Absolutely, Positively Not Spying on You: a PSA From Your Samsung Smart ... “WikiLeaks on Tuesday released thousands of documents that it said described sophisticated software tools used by the Central Intelligence Agency to break into smartphones, computers and even Internet-connected televisions…One [program], code-named Weeping Angel, uses Samsung “smart” televisions as covert [surveillance] devices.” — The New York Times, March 7th, 2007 Gabe, what’s going on? 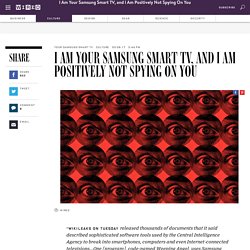 You’re poking around my ports like a madman back there. Is something wrong? Is my volume button stuck again, or did I— Oooooh. Gabe. Yet now you’re giving me the same perplexed look you used to get whenever you angrily guessed the wrong villain on The Mysteries of Laura (which you did on seven separate instances between 1/13/14 and 4/02/14). Also, do you think you could scooch over to your left a little bit? I mean, think about it: What kind of intel could I possibly collect about you? Did those things set off a few alarms with me? So please, Gabe, just find it in your heart to trust me again. WikiLeaks CIA Cyberwar Pearl Harbor code release dangerous. WikiLeaks reports 'largest ever' leak of C... 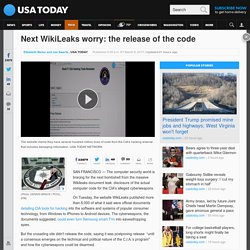 The website claims they have several hundred million lines of code from the CIA's hacking arsenal that includes damaging information. USA TODAY NETWORK SAN FRANCISCO — The computer security world is bracing for the next bombshell from the massive Wikileaks document leak: disclosure of the actual computer code for the CIA's alleged cyberweapons. On Tuesday, the website WikiLeaks published more than 8,000 of what it said were official documents detailing CIA tools for hacking into the software and systems of popular consumer technology, from Windows to iPhones to Android devices. The cyberweapons, the documents suggested, could even turn Samsung smart TVs into eavesdropping spies. Theresa Payton: WikiLeaks Says CIA Hacking Your Devices To Listen In - News 1110 99.3 WBT.