Splinternet? Many Paths In Wake of Safe Harbor Ruling - None Easy. An EU Court’s ruling invalidating a 15 year old safe harbor agreement between the US and EU leaves companies with a myriad of choices about how to respond – none of them good. 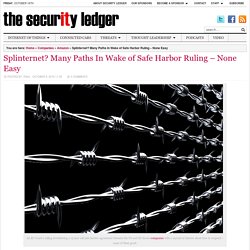 In-brief: An EU Court’s ruling invalidating a 15 year old safe harbor agreement between the US and EU leaves companies with a myriad of choices about how to respond – none of them good. Call it “Splinternet:” a splintering of the once borderless landscape of the Internet, across which information has flowed freely for decades, as individual countries within the European Union (EU) seek to assert their own rules and priorities over data related to their citizens. Fallout from EU-US Safe Harbour ruling will be dramatic and far-reaching. In the wake of last week's dramatic judgement by the Court of Justice of the European Union (CJEU), which means that transatlantic data transfers made under the Safe Harbour agreement are likely to be ruled illegal across the EU, there has been no shortage of apocalyptic visions claiming that e-commerce—and even the Internet itself—were doomed. 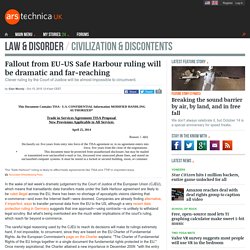 Companies are already finding alternative, if imperfect, ways to transfer personal data from the EU to the US, although a very recent data protection ruling in Germany suggests that one approach—using contracts—is unlikely to withstand legal scrutiny. But what's being overlooked are the much wider implications of the court's ruling, which reach far beyond e-commerce. The careful legal reasoning used by the CJEU to reach its decisions will make its rulings extremely hard, if not impossible, to circumvent, since they are based on the EU Charter of Fundamental Rights. US government to continue to administer Safe Harbor after ECJ ruling - Business Insider.

Peter/Flickr (CC) The US government says it will continue to administer the "Safe Harbor" program, a framework for transferring citizens' data between Europe and the US — despite it being struck down by Europe's top court earlier this month. 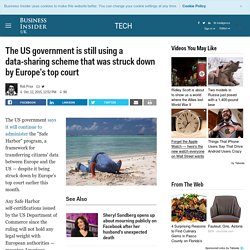 Any Safe Harbor self-certifications issued by the US Department of Commerce since the ruling will not hold any legal weight with European authorities — meaning American companies who choose to take this route are opening themselves up to legal challenges from national regulators. The 2000 Safe Harbor decision was a way to unify Europe and America's disparate regulatory regimes, and streamline the transfer of data on citizens between the two regions for companies. It meant that US companies could self-certify with the Department of Commerce, and not have to worry about differences in regulation in over 20 European countries. The ruling throws the around 4,500 American companies that relied on Safe Harbor into confusion and legal jeopardy. Dr. The Schrems Case Archives - Verfassungsblog. 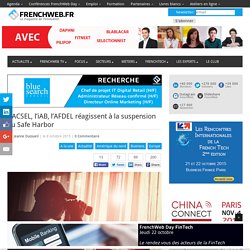 Could the Schrems decision trigger a regulatory "race to the top"? Ever since David Vogel coined the term of art “California effect” back in 1995, many have wondered, including Vogel himself, to what extent is policy convergence toward a more stringent regulatory standard really possible. 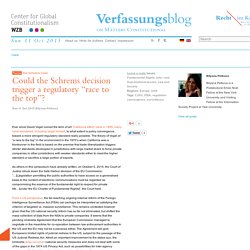 The theory of Vogel of “a race to the top” in the environment in the 1970’s when California was a frontrunner in the field is based on the premise that trade liberalization triggers stricter standards developed in jurisdictions with large market share to force private companies in other jurisdictions with weaker standards either to meet the higher standard or sacrifice a large portion of exports.

As others in this symposium have already written, on October 6, 2015, the Court of Justice struck down the Safe Harbor decision of the EU Commission. By and large the possibility of challenging mass surveillance worldwide can be strengthened by two factors. Perhaps counter-intuitively, the first should be the support of the business community. Transfer of personal data to US may constitute an offence. 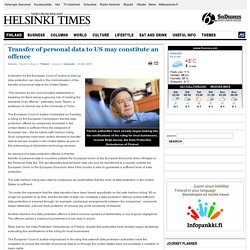 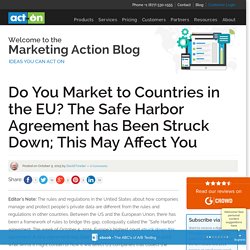 Between the US and the European Union, there has been a framework of rules to bridge this gap, colloquially called the “Safe Harbor” agreement. The week of October 5, 2015, Europe’s highest court struck down this agreement. A new agreement may take its place, but it is uncertain, at this point, what terms it might contain or how it will affect US companies that collect the personal data of European citizens in the course of marketing.

Forbes Welcome. Tech companies like Facebook not above the law, says Max Schrems. The EU’s safe harbour ruling is a “puzzle piece in the fight against mass surveillance, and a huge blow to tech companies who think they can act in total ignorance of the law,” says Max Schrems, the man who brought the case. 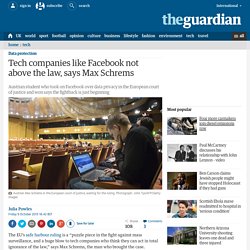 “US companies are realising that European laws are getting more and more enforced. But still, people don’t believe that a court would order Google or Facebook to do something – they wouldn’t dare. Well, yes, they fucking would,” he said, speaking in Vienna. The European ruling earlier this week sunk a 15-year-old data-transfer pact, the “safe harbour” regime, which offered a privileged route for over 4,000 transatlantic businesses to self-certify that they satisfied “adequate” data-protection standards under European law.

“The judgment will apply to European surveillance just as well,” says Schrems, explaining the strategic motivation behind the case. “These private surveillance actors collect all the data that the governments then suck up. Strade - The UnSafe Harbor ruling: A blow to US companies and European SMEs. On October 6th Europe’s highest court declared the US-EU Safe Harbor Framework invalid in light of the widespread mass surveillance carried out by the American government and the inherent inability to protect European privacy rights representing a great victory for Schrems and privacy advocates across the globe. 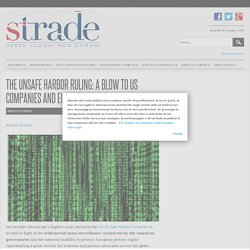 This past Tuesday changed the way that US companies operating in Europe will transfer data to their parent companies for good. It all started back in 2013 when Max Schrems, an Austrian law student, brought a complaint against Facebook before the Irish Data Protection Authority arguing that his Facebook user data, transferred to the US where it had been processed under the Safe Harbor scheme, was accessible by American intelligence authorities in violation of his privacy rights enshrined in the Charter of Fundamental Rights and the European Data Protection Directive. I più letti della settimana. European Court of Justice rules on EU-US data transfer. 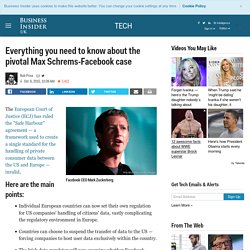 Safe Harbor Invalidated: What Next? The Death of Safe Harbor: Don't Consternate, Take Action. Businessinsider. EU Court Says Data-Transfer Pact With U.S. Violates Privacy. Derek Scally: Schrems data privacy ruling creates big headache for Ireland. If you knew a harbour was unsafe, would you anchor your boat there? Probably not. If the harbour authorities knew of safety issues yet kept silent and refused to act, are they liable if your boat was damaged, washed away or even stolen?

Yes. Viviane Reding on Twitter. Invalidation du « safe harbor » par la Cour de Justice de l’Union européenne : une décision clé... Germany Demands Changes to EU-US Agreement on Commercial Data Transfer. Why abandoning Safe Harbour could 'stop the European operations of Facebook and Google in their tracks' - 30 Sep 2015. The future of Safe Harbour, the agreement that covers the transfer of personal data between the EU and the US, is in doubt.

Safe Harbour, which dates back to 2000, bridges the gap between the data protection legislation in Europe and that in the US, which is generally much weaker as regards personal data. US companies signing up to Safe Harbour agree to adhere to the EU's data protection rules, including giving individuals notice that their data is being collected and how it will be used, and ensuring sufficient security is in place to prevent loss of the personal data. Ever since Edward Snowden leaked details of the NSA's PRISM programme Safe Harbour has been under intense scrutiny by law makers and privacy campaigners who claim that the activities of the US security services, which include industrial espionage and spying on heads of state as well as the bulk collection of data from all internet users, mean that the agreement is not worth the paper it's written on.

Le Safe Harbor invalide - Qui est concerné ? Quels effets ? Et maintenant ? Data Transfer Pact Between U.S. and Europe Is Ruled Invalid. This privacy activist has just won an enormous victory against U.S. surveillance. Here’s how. Privacy activist Max Schrems has just won an extraordinary legal victory against U.S. surveillance of European citizens. (License-free photo courtesy of Europe-v-Facebook) The European Court of Justice, Europe’s highest court, has just ruled that the Safe Harbor, an arrangement between the European Union and the United States allowing for the transfer of personal data, is legally invalid. Few non-specialists have heard of the Safe Harbor.

The landmark ruling could have a major repercussions for the likes of Facebook and Google, who depend on being able to freely transfer user data between the two continents. Court Rejects Trans-Atlantic Data Pact · Handelsblatt Global Edition. Europe’s highest court on Tuesday struck down a key legal principle that had enabled U.S. web giants to operate in the European Union and store and manipulate the personal data of people living there. The ruling could have far-reaching consequences for trans-Atlantic web businesses. In his case brought against Facebook, Max Schrems, an Austrian law-student-turned-lawyer, challenged the social network’s practice of storing and processing personal data, which, he successfully argued, had violated European privacy law.

The Luxembourg-based court agreed, invalidating Safe Harbor, a fast-track legal method used by U.S. web businesses to comply with European privacy restrictions since the 1990s. The legal principle had enabled all forms of web businesses, from giants such as Google, Facebook and Amazon, to small firms, to operate in Europe essentially without restriction. But Mr. Europe’s highest court strikes down Safe Harbor data sharing between EU, US. Europe's top court, the Court of Justice of the European Union (CJEU), has struck down the 15-year-old Safe Harbour agreement that allowed the free flow of information between the US and EU.

The most significant repercussion of this ruling is that American companies, such as Facebook, Google, and Twitter, may not be allowed to send user data from Europe back to the US. It's important to note that the CJEU's ruling (PDF) will not immediately prevent US companies from sending data back to the motherland. Rather, the courts in each EU member state can now rule that the Safe Harbour agreement is illegal in their country. It is is very unlikely, however, that a national court would countermand the CJEU's ruling in this case. The case was originally sent to the CJEU by the High Court of Ireland, after the Irish data protection authority rejected a complaint from Maximillian Schrems, an Austrian citizen. Twitter may have already begun this bifurcation of its data. Europe's highest court issued a ruling that has Facebook scrambling. The European Union's highest court ruled on Tuesday that U.S. law isn't enough to protect European users' online privacy when it comes to sites like Facebook, Twitter and Google.