Flaring up or bubbling over? Phrasal verbs to express emotions, part 2. By Liz Walter My last post was about phrasal verbs and prepositional verbs connected to sadness and happiness. 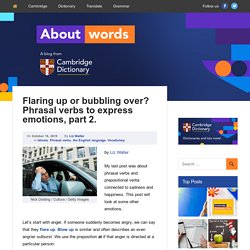 This post will look at some other emotions. Let’s start with anger. If someone suddenly becomes angry, we can say that they flare up. Blow up is similar and often describes an even angrier outburst. He flared up when Joel suggested he was to blame. She blew up at photographers who followed her to her home. We can also say that someone flies into a rage: When he was told he couldn’t come in, he flew into a rage and attacked the doorman. If something or someone makes you angry, you can say that they get to you. I know he’s annoying, but don’t let him get to you. It really winds me up when people spell my name wrong. There are also several phrasal verbs connected with feeling scared or nervous. When it was my turn to speak, I just clammed up with nerves. I couldn’t fight back – I just froze up. You might also hang back (not move forward or not do something) because you feel shy or nervous:

Weighed down or perking up? Phrasal verbs to express emotions, part 1. By Liz Walter Phrasal verbs are a very important part of English (even if students hate them!) 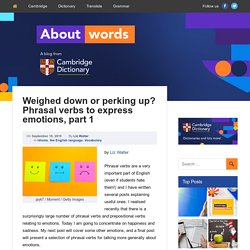 And I have written several posts explaining useful ones. I realised recently that there is a surprisingly large number of phrasal verbs and prepositional verbs relating to emotions. Today I am going to concentrate on happiness and sadness. My next post will cover some other emotions, and a final post will present a selection of phrasal verbs for talking more generally about emotions. Taboo Cards. Quote i just say whatever i want to whoever i want whenever i want wherever i want however eminem 85 54 01. 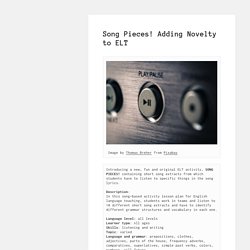 Step 2. Step 3. Step 4. Step 5. Like this: Like Loading... Márcia "Mars" Bonfim. This Company Turns Sick Kids Into Superheroes. A Superhero is a character with extraordinary physical or mental powers, far beyond the range of normal human ability and kids want to be one. 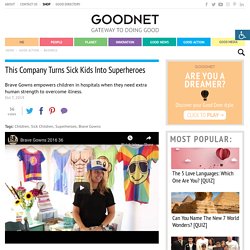 Superheroes give kids a moral compass and the courage to navigate the universe with, Axel Alonso, the editor-in-chief at Marvel Comic told beliefnet. ” How much more so do kids give suffering from cancer need a source of hope and courage. That’s where Brave Gowns comes in. established in 2015, the company’s hospital gowns for sick kids come with special superhero capes. Indeed, these kids have superhuman strength to overcome their biggest fears, and magical little gowns of empowerment offer exactly that. Brave Gowns created the tiny superhero capes as a type of comfort blanket for children going through such a traumatic time. Every day in the US, 43 children are diagnosed with cancer. The creator of the company, Summer Germann, understands firsthand how much these capes can mean to a child in the hospital. The Only Road.