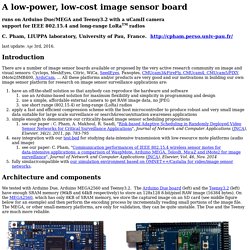 Pham, LIUPPA laboratory, University of Pau, France. last update: Apr 3rd, 2016. Introduction There are a number of image sensor boards available or proposed by the very active research community on image and visual sensors: Cyclops, MeshEyes, Citric, WiCa, SeedEyes, Panoptes, CMUcam3&FireFly, CMUcam4, CMUcam5/PIXY, iMote2/IMB400, ArduCam, ... Architecture and components We tested with Arduino Due, Arduino MEGA2560 and Teensy3.2. For the camera, we use the uCamII from 4D systems. The encoding scheme is the one described in our test-bed pages and it has been ported to the Arduino Due (and later tested on the Teensy3.2) with very little modifications. Blind-control. This project is about electrically controlled roller shutters and motorized blinds. 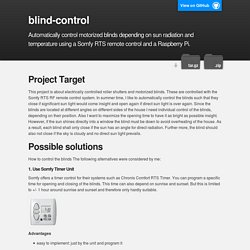 These are controlled with the Somfy RTS RF remote control system. In summer time, I like to automatically control the blinds such that they close if significant sun light would come insight and open again if direct sun light is over again. Since the blinds are located at different angles on different sides of the house I need individual control of the blinds, depending on their position. Also I want to maximize the opening time to have it as bright as possible insight. However, if the sun shines directly into a window the blind must be down to avoid overheating of the house. How to control the blinds The following alternatives were considered by me: 1.

Somfy offers a timer control for their systems such as Chronis Comfort RTS Timer. MicroPython Basics: What is MicroPython? There are a couple important differences between Arduino and MicroPython. 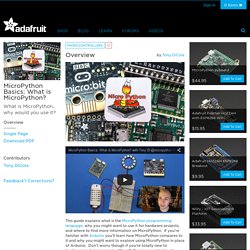 Interpreted means when MicroPython code runs it has to do a little more work to convert from MicroPython code to instructions the CPU understands. MicroPython pyboard [v1.1] ID: 2390 - $44.95. The pyboard is a compact and powerful electronics development board that runs MicroPython. 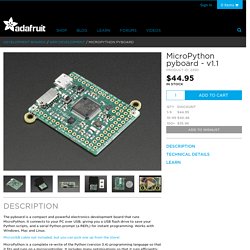 It connects to your PC over USB, giving you a USB flash drive to save your Python scripts, and a serial Python prompt (a REPL) for instant programming. Works with Windows, Mac and Linux.MicroUSB cable not included, but you can pick one up from the store! MicroPython is a complete re-write of the Python (version 3.4) programming language so that it fits and runs on a microcontroller. It includes many optimisations so that it runs efficiently and uses very little RAM.MicroPython runs bare-metal on the pyboard, and essentially gives you a Python operating system.

OneID-connect — oneID-connect 0.12.1 documentation. OneID-connect is a Python authentication framework for the Internet of Things (IoT), servers and end-users. 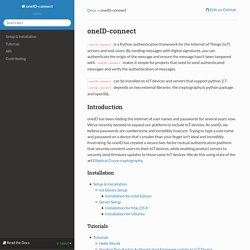 By sending messages with digital signatures, you can authenticate the origin of the message and ensure the message hasn’t been tampered with. oneID-connect makes it simple for projects that need to send authenticated messages and verify the authentication of messages. oneID-connect can be installed on IoT devices and servers that support python 2.7. oneID-connect depends on two external libraries: the cryptography.io python package and openSSL. oneID has been ridding the internet of user names and passwords for several years now.

We’ve recently decided to expand our platform to include IoT devices. At oneID, we believe passwords are cumbersome and incredibly insecure.