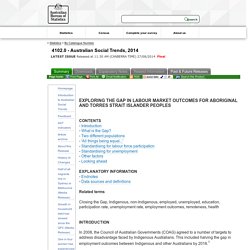 - Two different populations - 'All things being equal...' - Standardising for labour force participation - Standardising for unemployment - Other factors - Looking ahead EXPLANATORY INFORMATION - Endnotes - Data sources and definitions Related terms Closing the Gap, Indigenous, non-Indigenous, employed, unemployed, education, participation rate, unemployment rate, employment outcomes, remoteness, health In 2008, the Council of Australian Governments (COAG) agreed to a number of targets to address disadvantage faced by Indigenous Australians. Understanding this gap is key to addressing it - what factors contribute to it? Western australian aboriginal child health survey ch2. Mar 2011. This article is also available as a PDF - Download the PDF here Have your say below Educational attainment has long been recognised as being correlated with a range of indicators of social wellbeing. 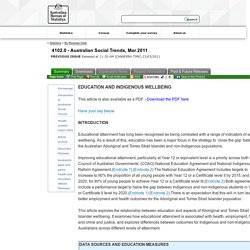 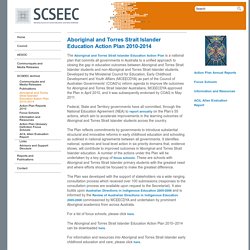 Developed by the Ministerial Council for Education, Early Childhood Development and Youth Affairs (MCEECDYA) as part of the Council of Australian Governments' (COAG's) reform agenda to improve life outcomes for Aboriginal and Torres Strait Islander Australians, MCEECDYA approved the Plan in April 2010, and it was subsequently endorsed by COAG in May 2011.

Federal, State and Territory governments have all committed, through the National Education Agreement (NEA) to report annually on the Plan’s 55 actions, which aim to accelerate improvements in the learning outcomes of Aboriginal and Torres Strait Islander students across the country. For a list of focus schools, please click here. Achieving%20Educational%20Equality%20for%20Australia's%20ATSI%20Peoples Discussion%20Paper. Pakistan. The delivery of education services in Pakistan is severely impacted by economic, political and security challenges that the country has been facing for some years. 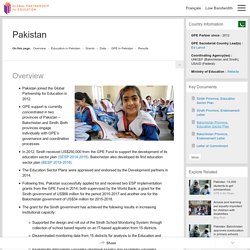 The 18th Amendment to the Constitution of Pakistan, approved in 2010, devolved responsibility for education delivery and spending to provincial governments. The federal ministry retains some limited mandates, mainly in curriculum development, accreditation and the financing of research and development. According to UIS data, Pakistan spent 2.5% of GDP on education in 2013. Education in Pakistan. Education in Pakistan is overseen by the Federal Ministry of Education and the provincial governments, whereas the federal government mostly assists in curriculum development, accreditation and in the financing of research and development. 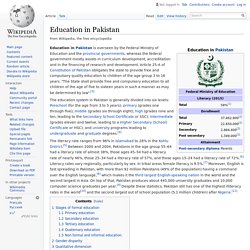 147130e. EDUCATION IN PAKISTAN A FACT SHEET. Pakistan - Statistics. Please note that the data for all countries is in the process of being updated. 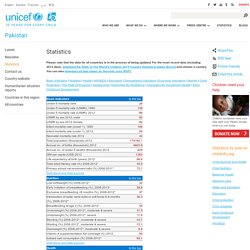 For the most recent data (including 2013 data), download the State of The World's Children 2015 Country Statistical tables [Excel] and choose a country. You can also download all data tables by thematic area [PDF]. UNESCO - Education for All - Knowledge sharing - Grassroots stories - Pakistan. By Aamir Latif of Pakistan Press International reports The picture of illiteracy in Pakistan is grim. 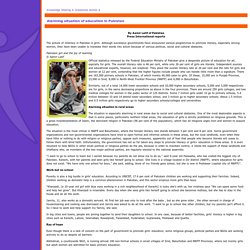 Although successive governments have announced various programmes to promote literacy, especially among women, they have been unable to translate their words into action because of various political, social and cultural obstacles. Pakistani girl and the joy of learning © Aamir Latif. Health education. Education System of Pakistan: Issues, Problems and Solutions : Islamabad Policy Research Institute. Malala Yousafzai urges world leaders at UN to promise safe, quality education for every child. Speaking at the United Nations General Assembly alongside 193 youth representatives from the Organisation’s 193 Member States, Pakistani education advocate Malala Yousafzai today asked world leaders to promise that every child will have the right to safe, free and quality primary and secondary education. 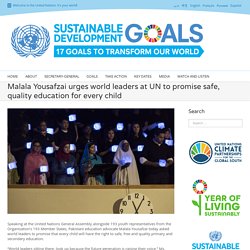 “World leaders sitting there, look up because the future generation is raising their voice,” Ms. Yousafzai, who was shot in 2012 by the Taliban for attending classes, told hundreds of senior government officials in a stirring address delivered from the highest mezzanine of the General Assembly Hall. “Today, we are 193 young people representing billions more. Each lantern we hold represents the hope we have for our future because of the commitments you have made to the global goals,” she added as each young person held up a blue light. “The world leaders need to take all these issues more seriously,” Ms. Ms. Via UN News Centre. Education - United Nations Sustainable Development. 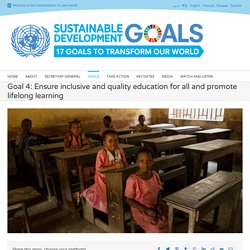 Obtaining a quality education is the foundation to improving people’s lives and sustainable development. Major progress has been made towards increasing access to education at all levels and increasing enrolment rates in schools particularly for women and girls. Basic literacy skills have improved tremendously, yet bolder efforts are needed to make even greater strides for achieving universal education goals. For example, the world has achieved equality in primary education between girls and boys, but few countries have achieved that target at all levels of education. UNICEF report: Growing inequalities threaten most disadvantaged kids Read More. Australian education system. The Australian education system provides primary, secondary and tertiary education. 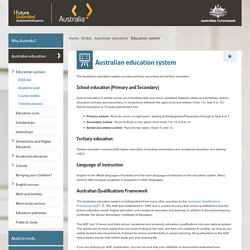 School education (Primary and Secondary) Pakistan Observer. Sundus Fatima. UNICEF report: Growing inequalities threaten most disadvantaged kids. Some 69 million children under five years of age will die from mostly preventable causes, 167 million children will live in poverty, and 750 million women will have been married as children by 2030, unless the world focuses more on the plight of its most disadvantaged children, according to a United Nations report published today. “Denying hundreds of millions of children a fair chance in life does more than threaten their futures – by fueling intergenerational cycles of disadvantage, it imperils the future of their societies,” said the Executive Director of the UN Children’s Fund (UNICEF), Anthony Lake, on the release of The State of the World’s Children, the agency’s annual flagship report. “We have a choice: Invest in these children now or allow our world to become still more unequal and divided,” he added.

Malala Yousafzai - Children's Activist, Women's Rights Activist. As a young girl, Malala Yousafzai defied the Taliban in Pakistan and demanded that girls be allowed to receive an education. She was shot in the head by a Taliban gunman in 2012, but survived and went on to receive the Nobel Peace Prize. Synopsis Malala Yousafzai was born on July 12, 1997, in Mingora, Pakistan. As a child, she became an advocate for girls' education, which resulted in the Taliban issuing a death threat against her. On October 9, 2012, a gunman shot Malala when she was traveling home from school. Early Life On July 12, 1997, Malala Yousafzai was born in Mingora, Pakistan, located in the country's Swat Valley. Initial Activism.

The Malala Fund. Solberg op-ed: We have chance to make global education work. For the first time in history we can succeed in providing education for all children and young people. If we put education first, we will gain multiple benefits in terms of development and prosperity. Political will is paramount, and must be backed by the right policies, additional funds and innovative partnerships that include all interested parties.

As prime minister of Norway and co-chair of the UN sustainable development goals advocacy group, I am doing my best to ensure this will become a reality. This week, the international commission on financing global education opportunity gathers in Oslo for its last meeting before making recommendations to the UN secretary general in September. “Our progress as a nation can be no swifter than our progress in education,” John F Kennedy once stated in a message to the US Congress. Take job creation and innovation. Worldwide, there is a huge need for more and better jobs, especially with youth unemployment rising.

Take gender equality and health. The State of the World’s Children 2015. UN conference adopts education agenda for civil society. A global education action agenda affirming the importance of Sustainable Development Goal 4 – ensuring inclusive and equitable quality education and promoting lifelong opportunities for all – was adopted today in Gyeongju, Republic of Korea. Speaking from the podium at the 66th United Nations Department of Public Information (DPI)/Non-Governmental Organization (NGO) Conference, Ms. Cristina Gallach, UN Under-Secretary-General for Communications and Public Information, said “This Conference has demonstrated another example of the value for the United Nations in investing in partnership with academia and NGOs.” The Gyeongju Action Plan provides concrete guidance for NGOs around the world to enhance their ability to lobby governments to commitment to implementing the SustainableSustainable Development Goals and mobilize NGOs in communities on the ground.