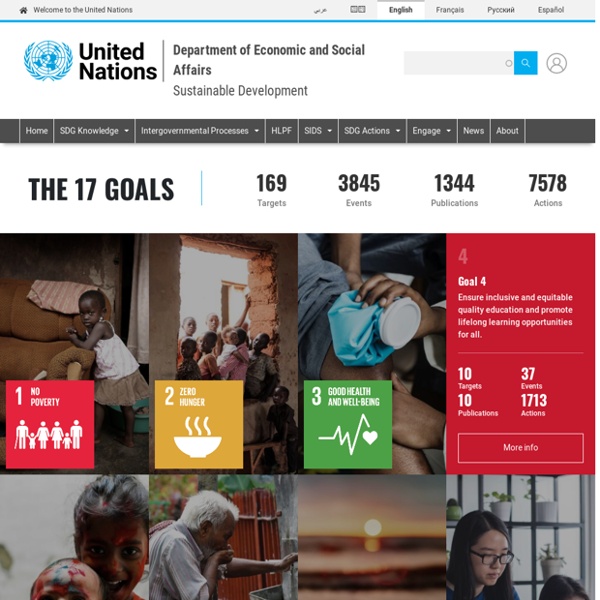 History The 2030 Agenda for Sustainable Development, adopted by all United Nations Member States in 2015, provides a shared blueprint for peace and prosperity for people and the planet, now and into the future. At its heart are the 17 Sustainable Development Goals (SDGs), which are an urgent call for action by all countries - developed and developing - in a global partnership. They recognize that ending poverty and other deprivations must go hand-in-hand with strategies that improve health and education, reduce inequality, and spur economic growth – all while tackling climate change and working to preserve our oceans and forests. The SDGs build on decades of work by countries and the UN, including the UN Department of Economic and Social Affairs In June 1992, at the Earth Summit in Rio de Janeiro, Brazil, more than 178 countries adopted Agenda 21, a comprehensive plan of action to build a global partnership for sustainable development to improve human lives and protect the environment.

Sneaker Life Cycle Impact The American term sneakers refers to footwear with a flexible sole made of rubber or synthetic material and an upper part made of leather or canvas. Sneakers were originally sporting apparel, but today are worn much more widely as casual footwear. A typical pair of running shoes generates 30 pounds of carbon dioxide emissions, equivalent to keeping a 100-watt light bulb on for one week, according to a new MIT-led life cycle assessment. A life cycle measures the environmental impact of the raw materials, processing, and transport to the final market as well as waste disposal. But what’s surprising to researchers isn’t the size of a shoe’s carbon footprint, but where the majority of that footprint comes from. The researchers found that more than two-thirds of a running shoe’s carbon impact can come from the manufacturing processes, with a smaller percentage arising from acquiring or extracting raw materials.

Club of Rome Organisation of individuals who claim to share a common concern for the future of humanity and strive to make a difference Founded in 1968 at Accademia dei Lincei in Rome, Italy, the Club of Rome consists of current and former heads of state, UN bureaucrats, high-level politicians and government officials, diplomats, scientists, economists, and business leaders from around the globe.[1] It stimulated considerable public attention in 1972 with the first report to the Club of Rome, The Limits to Growth. Since 1 July 2008 the organization has been based in Winterthur, Switzerland. Tourists who stole sand from beach in Sardinia could face up to six years in prison A pair of tourists face up to six years in prison after allegedly stealing a large quantity of sand from the pristine beaches of Sardinia. The French couple were found to have nearly 40kg (90lb) of fine white sand in the boot of their car. The vehicle was stopped during a routine check by border police as the tourists were preparing to board a ferry in Porto Torres, on the north coast of the island, bound for Toulon in France.

Footprint of our products Nokia Lumia 1520 The Nokia Lumia 1520 was our very first phone using recycled plastics in the product cover. Energy use 544 MJ The Limits to Growth Book on population growth The Limits to Growth (LTG) is a 1972 report[1] on the computer simulation of exponential economic and population growth with a finite supply of resources.[2] Commissioned by the Club of Rome, the findings of the study were first presented at international gatherings in Moscow and Rio de Janeiro in the summer of 1971.[1]:186 The report's authors are Donella H. Meadows, Dennis L. Meadows, Jørgen Randers, and William W. Behrens III, representing a team of 17 researchers.[1]:8

Understanding the origin of products is key to ending supply chain scandals There are many business benefits to knowing the origin of a product and understanding how raw materials are turned into finished goods. However, in reality few companies have access to detailed, accurate and verified information, and the return on investment for gaining this knowledge is poorly understood. There can be thousands of global suppliers in complex value chains, but there may be no single department with responsibility for traceability. However, this can change. There are compelling business cases for companies to map their value chains. Classroom Activities - Earth Overshoot Day Footprint Calculator: Measure your own Ecological Footprint with an online Footprint calculator (desktop computer required, available in several languages). The calculator tells you how many Earths would be required if everyone on the planet lived like you, and then suggests ways to reduce your Ecological Footprint. footprintcalculator.org Footprint Drawing: Suggest ways to reduce your Ecological Footprint in a drawing like the one by the seventh grader at left.

Europe’s Global Test - The Day After The coronavirus pandemic could give birth to a more autonomous and strategic EU. But the bloc must resolve its internal tensions and find its place in an increasingly fragmented world. It took a virus to bring Europe out of its recent interregnum—a time when, as Antonio Gramsci wrote in his Prison Notebooks, “the old is dying and the new cannot be born.” Post–Cold War optimism had led to a major step toward political unity in the 1992 Treaty on European Union.