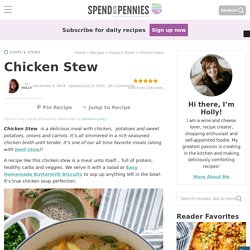 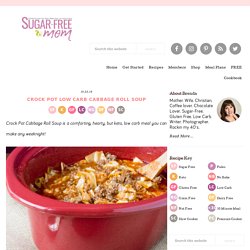 You may or may not be a cabbage fan, but honestly you must try this recipe! This recipe might just win you over. One of the most comforting meals on a cold winter’s day made in your crock pot or just simmer on the stove, but either way it’s a hearty meal for the whole family. Sweet Potato-Coconut Soup. When I posted about my illness on Facebook yesterday, someone suggested chicken soup. 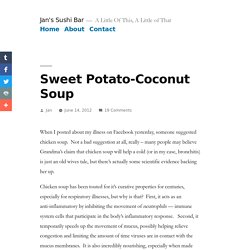 Not a bad suggestion at all, really – many people may believe Grandma’s claim that chicken soup will help a cold (or in my case, bronchitis) is just an old wives tale, but there’s actually some scientific evidence backing her up. Chicken soup has been touted for it’s curative properties for centuries, especially for respiratory illnesses, but why is that?

First, it acts as an anti-inflammatory by inhibiting the movement of neutrophils — immune system cells that participate in the body’s inflammatory response. Second, it temporarily speeds up the movement of mucus, possibly helping relieve congestion and limiting the amount of time viruses are in contact with the mucus membranes. It is also incredibly nourishing, especially when made with bones as well as meat and vegetables, as well as being easy to digest. Oh. I’m a convert. Curried Sweet Potato Soup With Coconut Milk Recipe. Crock Pot Chicken Yellow Curry Soup – Steph Gaudreau. Slow Cooker Baked Potato Soup - The Magical Slow Cooker. CABBAGE & SAUSAGE SOUP. CABBAGE & SAUSAGE SOUP 3 tablespoons butter 2 medium carrots, 4 ounces after trimming 2 stalks celery 1 small onion, 2 1/2 ounces 1 clove garlic, minced 1 pound cabbage 1/2-1 teaspoon xanthan gum, optional 2 teaspoons chicken bouillon granules Salt and pepper, to taste 16 ounces Boar's Head kielbasa * 4 cups chicken broth, homemade preferred 2 tablespoons fresh parsley, chopped If you chop and add the ingredients to the pot in the following order, it will give the carrots and celery a chance to get a head start before you add the cabbage. 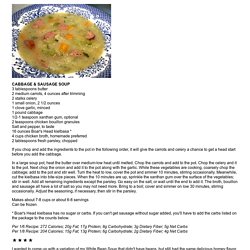 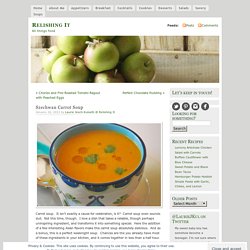 It isn’t exactly a cause for celebration, is it? Carrot soup even sounds dull. Not this time, though. I love a dish that takes a reliable, though perhaps uninspiring ingredient, and transforms it into something special. Here the addition of a few interesting Asian flavors make this carrot soup absolutely delicious. Like most soups, this recipe has a lot of wiggle room so you can adjust it to fit your palate. Chicken Tortilla Soup. This doesn’t actually have tortillas in it. 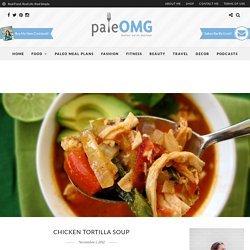 So I lied. But I did put plantain chips in it. Which made it kind of like tortilla chips. Or fritos. Whichever you like better, that’s what it was like. I’m kind of digging the cooler whether just because soups sound so freaking good. So I have begun to countdown the days until I go to California to see the friends that I met the last time I was out there for the Fueling the Fire Fundraiser. Did anyone else watch New Girl on Tuesday night?! Crockpot Chicken Wild Rice Soup Recipe. This Crockpot Chicken Wild Rice Soup is so darn simple to make and goes perfectly with a piece of crusty bread on a cold winter night. 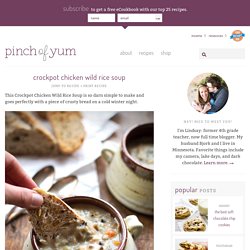 I adore this soup. It’s not really a secret because a) I’m from Minnesota, the homeland of things like creamy delicious Wild Rice Soup, b) I’ve only posted it at least seventeen other times on the blog, and c) WILD RICE. So this time the thing that makes it special is the Crockpot. This is Chicken Wild Rice Soup meets Chicken Bacon Wild Rice Soup mashing up into Crockpot Chicken Wild Rice Soup. Translation: life just got easy and I’m going to go watch Breaking Bad now while my dinner cooks in a large kitchen appliance without my supervision thank you very much. By the way, I don’t watch Breaking Bad yet but I’m 99% sure that I’m going to start today.

This is a perfect meal for the current state of our new kitchen. Keto Jalapeno Popper Soup (Low Carb) Save. 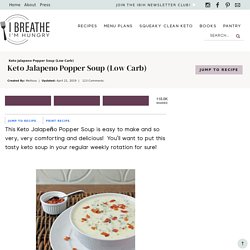 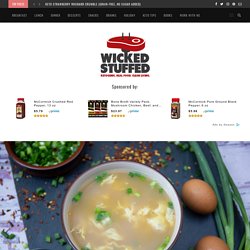 I love deviled eggs, even scrambled eggs once in a while, but it didn’t take too long after keto to be so over eggs as a source of protein. Are you sick of eggs? Bacon Cheeseburger Soup. Beef Stew. Easy Farmstand Fresh Cream of Tomato Soup Recipe. Keto Chicken Cordon Bleu Soup. Warm, comforting and crazy flavorful. 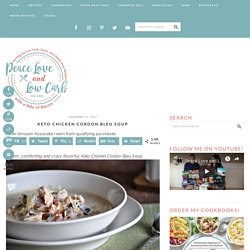 Keto Chicken Cordon Bleu Soup. In the winter months, my slow cooker is my favorite kitchen appliance. I love that with the right ingredients, and a little preparation, you can develop such rich, complex flavors. This soup is a great make ahead to take to a party or to freeze in smaller batches to eat later. You are sure to love this soup version of an old classic. Did you know that I have an entire ebook dedicated to low carb soups and stews? Print. Vegan & Gluten-Free Recipes by Allyson Kramer. Yes, it’s another orange soup. There may be more this month, so fair warning!

But this one is a pretty awesome recipe, if I do say so myself. This soup has a pleasant depth and is slightly sweet from the addition of those pretty orange potatoes and roasted cauliflower. The sweetness is delicately enhanced with a light sprinkle of garam masala. Homemade Mushroom Soup. The essence of the Christmas season should be about spending time, not money. Spending time away from work, with family and friends and a glass of eggnog. Spending time in the kitchen, slowing down, learning new dishes and relearning others, cooking from scratch for your loved ones to enjoy.

Spending time smiling, laughing, remembering the joy this season brings each year. And the season of spending time warming up with warm drinks and warm soups. One of my favorite warming dishes – Homemade Mushroom Soup. 43 Healthy and Hearty Paleo Soups for an Easy Meal - Paleo Grubs. One of the easier meals to make on the Paleo diet is soup. It basically involves adding all of the ingredients into a pot, cooking them up until they are tender, and serving it up.

What makes these Paleo soups so special is that they only contain ingredients that are approved according to the Paleo guidelines. They take great pains to exclude the ingredients that are typically found in soup that will set you back on your dieting efforts, including grain and dairy. Save Paleo Cauliflower Chowder Cauliflower provides a delicious base for this chowder recipe. Chunky Sweet Potato Soup Recipe. Sweet potatoes, loaded with vitamin A in the form of beta-carotene, form the base of this hearty, vivid orange soup. Avocado adds fresh green color along with healthy, skin-softening fats, which also aid the body's absorption of beta-carotene. Advertisement - Continue Reading Below Cal/Serv: 330 Yields: 6 Prep Time: 0 hours 25 mins Total Time: 0 hours 45 mins 2 tbsp. olive oil 1 medium onion 1 medium red pepper. Pumpkin and Chorizo Soup. I figure it’s safe to post a pumpkin recipe now. For a while there (all of October and November) I thought I was going to drown in pumpkin-flavored products.

In a large saucepan, heat the olive oil over medium-high heat. Stir in the onion and garlic, lower the heat to medium and cook until the onion begins to brown, about 7 minutes. Increase the heat to high, push the vegetables to the side of the pan, add the chicken and cook, stirring, until golden, about 5 minutes. Stir in the chipotles and adobo sauce, then stir in the chicken broth. Lower the heat and simmer for 15 minutes, skimming any foam.

Stir in the cilantro and lime juice; season with salt and pepper. Place 2 avocado slices in each of 6 soup bowls and pour in the soup. In a large saucepan, heat the olive oil over medium-high heat. Thai Chicken Coconut Soup (Tom Kha Gai) Recipe. COUNTRY CABBAGE SOUP. EMERALD ISLE SOUP. EMERALD ISLE SOUP 1/4 cup leeks or onions, chopped, about 3/4 ounce 1-2 tablespoons butter 16 ounces frozen broccoli 2 cups chicken broth, homemade preferred Salt and pepper, to taste 1 cup heavy cream Pinch nutmeg, optional Sauté the leek or onions in the butter in a medium saucepan until tender. Add the frozen broccoli, broth and a bit of salt and pepper. Bring to a boil; cover and simmer until the broccoli is very tender, about 10 minutes. Puree in a blender or with a stick blender until smooth and thick. Stir in the cream and blend well.