Hiroshima. I—A Noiseless Flash At exactly fifteen minutes past eight in the morning, on August 6, 1945, Japanese time, at the moment when the atomic bomb flashed above Hiroshima, Miss Toshiko Sasaki, a clerk in the personnel department of the East Asia Tin Works, had just sat down at her place in the plant office and was turning her head to speak to the girl at the next desk. 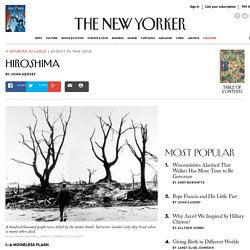 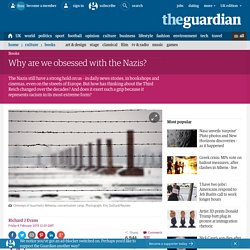 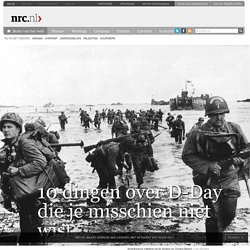 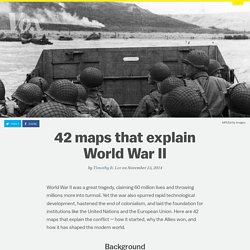 Lee on November 13, 2014 World War II was a great tragedy, claiming 60 million lives and throwing millions more into turmoil. Yet the war also spurred rapid technological development, hastened the end of colonialism, and laid the foundation for institutions like the United Nations and the European Union. Here are 42 maps that explain the conflict — how it started, why the Allies won, and how it has shaped the modern world. Background. Being the Son of a Nazi. In 1975, Rüdiger Heim landed in Egypt with one question on his mind: Was his father a Nazi? 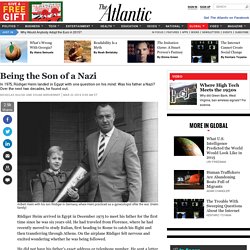 Over the next two decades, he found out. Aribert Heim with his son Rüdiger in Germany, where Heim practiced as a gynecologist after the war. (Heim family) Rüdiger Heim arrived in Egypt in December 1975 to meet his father for the first time since he was six years old. He had traveled from Florence, where he had recently moved to study Italian, first heading to Rome to catch his flight and then transferring through Athens. He did not have his father’s exact address or telephone number. Rüdiger wandered back and forth among the vacationing families and businessmen. Culture War. High culture played an important political role in Hitler’s Germany. 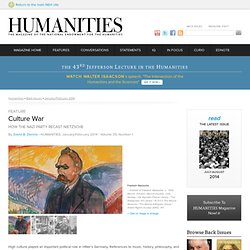 References to music, history, philosophy, and art formed a key part of the Nazi strategy to reverse the symptoms of decline perceived after World War I. Allusions to great creators and their works were used as propaganda to remind the Volk to love and worship their nation. In the words of the French scholar Eric Michaud, author of The Cult of Art in Nazi Germany, the Nazis used culture “to make the genius of the race visible to that race.”

And to cap off these images of a great national culture, the Nazis heralded Adolf Hitler, the Führer, as an artistic leader. As Michaud put it: “Hitler presented himself not only as a ‘man of the people’ and a soldier with frontline experience (Fronterlebnis), but also and above all as a man whose artistic experience constituted the best guarantee of his ability to mediate the Volksgeist and turn it into the ‘perfect Third Reich.’” Don’t you hear anything? Explaining Hitler. Explaining Hitler is a 1998 book by Ron Rosenbaum that compiled a number of different theories about why Adolf Hitler was the way he was, updated recently with new information. 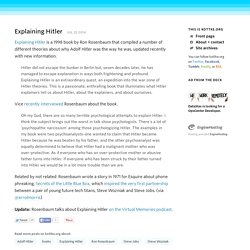 First American Report on Holocaust. On July 22, 1942—seventy-two years ago to this day—the first inhabitants of the Warsaw Ghetto were placed in rail cars and deported to Nazi concentration camps. 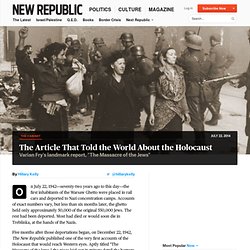 Hitler's bookbinder. Handcrafted bookbinding is an art that continues to this day. 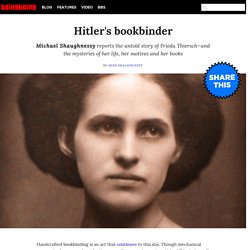 Though mechanical presses took over most production more than a century ago, artists still train to craft singular works of art by hand. The fetishism surrounding hand-bound volumes was also a part of the Nazi search to redefine a cultural aesthetic, and the party commissioned works from a variety of artists. Hitler's Furies Reviewed by Michael Kimmage. Wendy Lower’s Hitler’s Furies: German Women in the Nazi Killing Fields returns the Holocaust to something of its original horror. 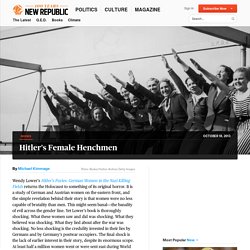 In what was a very masculine world, women generally appear either as hysterical, weeping Hitler fanatics or as hapless rape victims, reaping the Soviet whirlwind. Some readers, however – those familiar with the execrable concentration camp guards Irma Grese and Ilse Koch or perhaps with Bernhard Schlink’s novel The Reader – might recognise a third stereotype: that of the woman as perpetrator.

Hitler’s Furies, a new book by the American academic Wendy Lower, brings this latter image to a non-specialist audience. Distilling many years of research into the Holocaust, Lower focuses her account on the experiences of a dozen or so subjects – not including Grese and Koch – ranging from provincial schoolteachers and Red Cross nurses to army secretaries and SS officers’ molls. Hitler, Continued: Afterword from the Updated Edition of "Explaining Hitler: The Search for the Origins of His Evil".

In 1941, Charlotte Pommer graduated from medical school at the University of Berlin and went to work for Hermann Stieve, head of the school’s Institute of Anatomy. The daughter of a bookseller, Pommer had grown up in Germany’s capital city as Hitler rose to power. But she didn’t appreciate what the Nazis meant for her chosen field until Dec. 22, 1942. What she saw in Stieve’s laboratory that day changed the course of her life—and led her to a singular act of protest. Stieve got his “material,” as he called the bodies he used for research, from nearby Plötzensee Prison, where the courts sent defendants for execution after sentencing them to die. Over Buchenwald is alles wel bekend, totdat je er zelf rondloopt. Teruglezen: interview met laatste ooggetuige van Hitlers zelfmoord. The Art Hitler Hated by Michael Kimmelman. Degenerate Art: The Attack on Modern Art in Nazi Germany, 1937 an exhibition at the Neue Galerie, New York City, March 13–September 1, 2014 Catalog of the exhibition edited by Olaf Peters, with a preface by Ronald S.

Lauder and foreword by Renée Price Prestel, 320 pp., $60.00 As he had lived, Cornelius Gurlitt died at eighty-one early in May, in thrall to a trove of inherited art he kept hidden for decades mostly at a modest apartment in Munich. The Perfect Nazi Bride. “Take hold of the frying pan, dust pan, and broom, and marry a man.” Sounds like something from the conservative Mommy blogs that your favorite feminists rebuke on Twitter, no? Actually, it’s one of the Nazi leader Hermann Goering’s “Nine Commandments for the Workers’ Struggle,” published and posted throughout Germany in 1934.

Wading anew into the Mommy Wars, and on the heels of the back-to-school season, is an item just discovered in the stacks of Germany’s Federal Archive: a rule book for the Reichsbräuteschule, or Reich Bride School, set up by the Nazis “to mould housewives out of office girls.” In 1935, Gertrud Scholtz-Klink, the highest-ranking female in the Third Reich, recommended that women do their part: “Women must be the spiritual caregivers and the secret queens of our people, called upon by fate for this special task!”

To train women within their lesser sphere, a villa was erected in 1937 on Schwanenwerder Island, on Berlin’s Wannsee Lake. The SS Doctor Who Converted to Islam and Escaped the Nazi Hunters. Aribert Heim on horseback in his SS uniform The Holocaust, as you’ll probably know, produced some of history’s worst human beings. The thing is, though, besides those who made it into your textbooks—the Hitlers, Görings and Himmlers—many escaped unscathed, free to live out the rest of their days pretending to be mild-mannered expats who’d moved to Argentina simply because they preferred empanadas and polo to bratwurst and car manufacturing. One SS member to ultimately escape prosecution was an Austrian concentration camp doctor called Aribert Heim, who later became known as “Doctor Death.”