Andrew Sullivan: My Distraction Sickness — and Yours. I was sitting in a large meditation hall in a converted novitiate in central Massachusetts when I reached into my pocket for my iPhone. 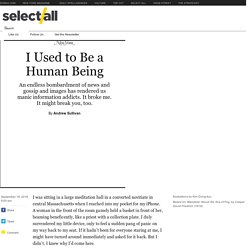 A woman in the front of the room gamely held a basket in front of her, beaming beneficently, like a priest with a collection plate. I duly surrendered my little device, only to feel a sudden pang of panic on my way back to my seat. If it hadn’t been for everyone staring at me, I might have turned around immediately and asked for it back. But I didn’t. Why We Can’t Look Away From Our Screens.

Are we addicted to technology? Image copyright Thinkstock Just five minutes after meeting sleep and energy expert Dr Nerina Ramlakhan in her central London clinic, she delivers some bad news. 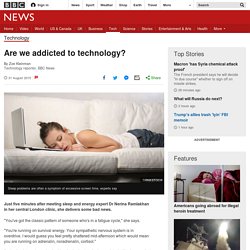 "You've got the classic pattern of someone who's in a fatigue cycle," she says. "You're running on survival energy. Top 10 Ways Your Privacy Is Being Invaded (and Sold, Traded, Auctioned, Analyzed, Repackaged, and Retargeted) In case you had any doubt: Your privacy is under siege. 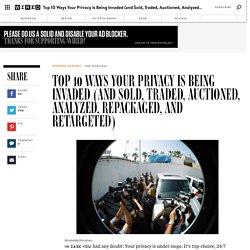 It’s top-choice, 24/7 prey for thousands of assorted predators—some benign, most not, and many invisible or unknown or not yet in business. (Full disclosure: We too are watching you at this very moment, recording your every keystroke and selling the info to marketers.) In fact, we’d go so far as to say privacy is a joke! Here’s our stab at a Top 10 list of the most outlandish, exotic, and occasionally hilarious ways we’re waving goodbye to it. The NSA Yep. Restrooms: The New Private Workstation? Your benign employers have access to a totalitarian array of eavesdropping tools: email monitoring, keystroke logging, telephone, text and voicemail recording, video surveillance, attendance and time monitoring.

Big Data Meets Big Dates Uber has already determined which cities likely have the highest number of one-night stands, based on customer ride times and locations. The Robots Are Winning! by Daniel Mendelsohn. Her a film directed by Spike Jonze Ex Machina a film directed by Alex Garland. 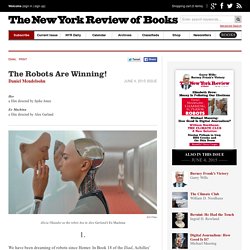 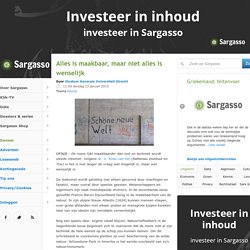 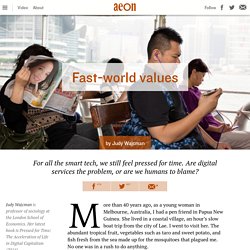 She lived in a coastal village, an hour’s slow boat trip from the city of Lae. I went to visit her. The abundant tropical fruit, vegetables such as taro and sweet potato, and fish fresh from the sea made up for the mosquitoes that plagued me. No one was in a rush to do anything. We spent an entire day making coconut milk. Popular now. Automation Makes Us Dumb. Artificial intelligence has arrived. 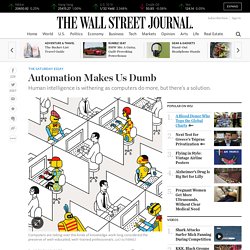 Today’s computers are discerning and sharp. They can sense the environment, untangle knotty problems, make subtle judgments and learn from experience. How to Stay Sane in the Notification Age. When I slip on my headphones, the clatter and chatter of the subway becomes an oasis of calm. 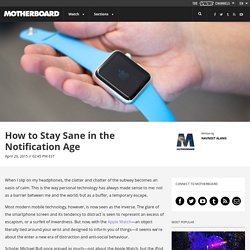 This is the way personal technology has always made sense to me: not as a barrier between me and the world, but as a buffer, a temporary escape. Most modern mobile technology, however, is now seen as the inverse. The glare of the smartphone screen and its tendency to distract is seen to represent an excess of escapism, or a surfeit of inwardness.

But now, with the Apple Watch—an object literally tied around your wrist and designed to inform you of things—it seems we're about the enter a new era of distraction and anti-social behaviour. Can we break free from the fear of missing out? – Jacob Burak. Here’s a test you might enjoy: rate these scenarios on a number scale, ranging from 1 for mild discomfort to 7 for outrageous distress. Scenario 1: you’re flicking through news websites, as you do every morning. Today, however, you’re behind schedule and have only 15 minutes to read articles, instead of your usual 30. You have to skip some of your favourite columns and sections. How would you rate your level of discomfort? (Most of us would probably choose a low level, say 2.)

Popular now Quantum weirdness is everywhere in the living world.