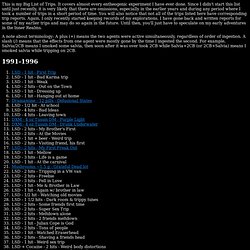 It covers almost every entheogenic experiment I have ever done. Since I didn't start this list until just recently, it is very likely that there are omissions, especially in the earlier years and during any period where I took a number of trips in a short period of time. You will also notice that not all of the trips listed here have corresponding trip reports.

Again, I only recently started keeping records of my explorations. I have gone back and written reports for some of my earlier trips and may do so again in the future. A note about terminology: A plus (+) means the two agents were active simultaneously, regardless of order of ingestion. The Psychedelic Library. Alas! 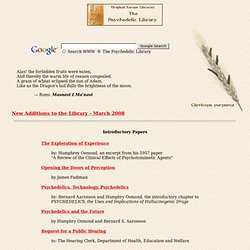 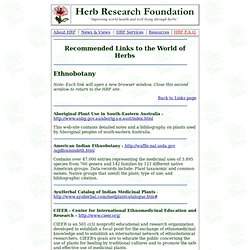 Close this second window to return to the HRF site. Back to Links page Aboriginal Plant Use in South-Eastern Australia - This web-site contains detailed notes and a bibliography on plants used by Aboriginal peoples of south-eastern Australia. American Indian Ethnobotany - Contains over 47,000 entries representing the medicinal uses of 3.895 species from 760 genera and 142 families by 123 different native American groups. AyuHerbal Catalog of Indian Medicinal Plants - CIEER - Center for International Ethnomedicinal Education and Research - CIEER is an 501 c(3) nonprofit educational and research organization developed to establish a focal point for the exchange of ethnomedicinal knowledge and to establish an international network of ethnobotanical researchers.

CISCOM-The Centralised Information Service For Complementary Medicine - The Encyclopedia of Psychoactive Plants. List of ethnobotanists. Chaga Mushroom Science. The “Gift from God” Rather than soft like a mushroom, chaga is hard, almost as hard as wood. 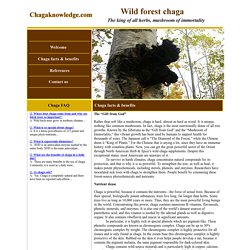 It is unique, nothing like common mushrooms. In fact, chaga is the most nutritionally dense of all tree growths. Known by the Siberians as the “Gift from God” and the “Mushroom of Immortality,” this vibrant growth has been used by humans to support health for thousands of years. The Japanese call it “The Diamond of the Forest,” while the Chinese deem it “King of Plants.”

Nutrient dense Chaga is powerful, because it contains the nutrients—the force of actual trees. Ancient Chinese regarded it as a longevity factor Yet, here is the main thing you need to know. Documents for serious Psychonauts. Alchemical archives. Harbor - UCLA Psilocybin and Cancer. This is the first psychedelic treatment with terminally ill patients since the early 1970's. The study examines the use of psilocybin in a controlled setting to reduce the psychospiritual anxiety, depression, and physical pain of terminal cancer patients. As a society we spend a great deal of attention treating cancer, but very little treating the human being who is dying of cancer. This study treats the whole human being. It aims to help the patient move towards a 'good' death, and help the patient's family deal well with the dying process of their loved one. If we can learn to work more skillfully with dying, we will also learn to take better care of life. 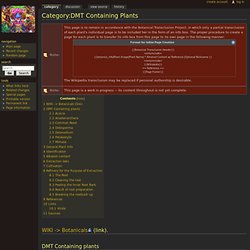