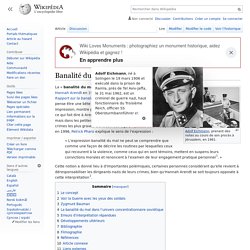 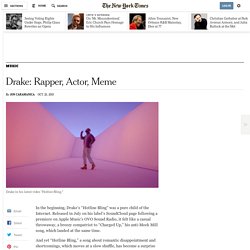 Released in July on his label’s SoundCloud page following a premiere on Apple Music’s OVO Sound Radio, it felt like a casual throwaway, a breezy compatriot to “Charged Up,” his anti-Meek Mill song, which landed at the same time. And yet “Hotline Bling,” a song about romantic disappointment and shortcomings, which moves at a slow shuffle, has become a surprise radio hit and is currently at No. 2 in the country. This week, though, the Internet decided it wanted “Hotline Bling” back. Late Monday night, Drake released its video, mostly made up of long shots of him dancing in front of a plain background that’s constantly changing colors: mustard, lavender, baby blue, peach, chartreuse. The “Hotline Bling” video is also the moment when Drake fully becomes a meme.

No celebrity understands the mechanisms of Internet obsession better than Drake. The “Hotline Bling” video is built exactly for that task. 20 Of The Best Documentary Shorts You Can Watch Online. Great short documentaries are hard to come by, even more so than narratives, but why? To assemble everything great we find in feature documentaries, into a short duration, without having the level of control found in narratives, makes it an almost impossible achievement. So when documentarians ARE able to pull off such feats, it’s important that they get the recognition they deserve.

This list highlights short documentaries that are not only of high standing quality, but are also readily available to view online. Of course some great masterpieces were not able to make this list, but unfortunately there are so few available to watch for free. If I happened to miss one of your favourite short documentaries that are also available for the world to see online, then be my guest and add it to the comments. 20. A black-and-white silent documentary directed and produced in 1895 by the celebrated Louis Lumière.

Why it’s essential? 19. Oscar Winner Laura Poitras on How Field of Vision Will Ch. By Paula Bernstein | Indiewire September 10, 2015 at 12:56PM Field of Vision comes from three experts in the non-fiction field. 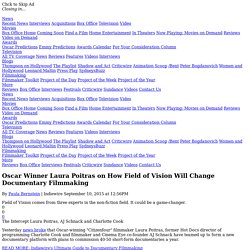 It could be a game-changer. The Intercept Laura Poitras, AJ Schnack and Charlotte Cook Yesterday news broke that Oscar-winning "Citizenfour" filmmaker Laura Poitras, former Hot Docs director of programming Charlotte Cook and filmmaker and Cinema Eye co-founder AJ Schnack have teamed up to form a new documentary platform with plans to commission 40-50 short-form documentaries a year. READ MORE: Indiewire's Ultimate Guide to Documentary Filmmaking Following its festival premiere, the first season of Field of Vision will launch online on September 29 with one film shared per week through November. 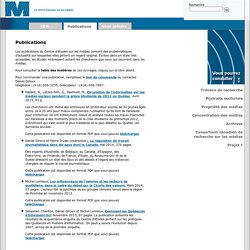 It's because we perceive time relative to the 'absolute' time we can compare it to... When you are 4 weeks old, a week is a quarter of your life. By the end of your first year, a week is just a fiftieth of your life. By the time you turn 50, a whole year will be a fiftieth of your life. This theory was first put forward by Paul Janet in 1897. Like many things, this will require some patience to get through. But in the end it'll be over faster than you thought or hoped it would be. Albert Einstein said about the perception of time, that 'an hour spent in the company of pretty girls passes more quickly than an hour spent in a dentist chair'. Waiting 24 days for Christmas at age 5 feels like waiting a year at age 54. According to this theory, assuming you'll become 100 years old, half of your perceived life is over at age 7.

Did you notice how much faster the 10th year scrolled by than the first? How I Built an Interactive Timeline in PowerPoint (Free Download!) ARTE and the NFB. Homemad.