A Step-by-Step Guide to Build Your Story's Plot. 18 min read We recently explored some deadly filmmaking myths and today we’ll combat those with a breakthrough way to build the plot of your story, step by step. 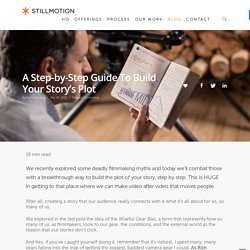 This is HUGE in getting to that place where we can make video after video that moves people. After all, creating a story that our audience really connects with is what it’s all about for so, so many of us. We explored in the last post the idea of the Woeful Gear Bias, a term that represents how so many of us, as filmmakers, look to our gear, the conditions, and the external world as the reason that our stories don’t click.

And hey, if you’ve caught yourself doing it, remember that it’s natural. “You all have come such a long way. “I’m not saying you’ve done a 180 (pun intended); many of the points you made back then regarding gear were dead on. “Today while you still use great equipment, it definitely feels more like you all are MORE about the story, and whatever equipment you can use. How to Make a Cartoon: Top 7 Animated Video Makers - Freemake. How to Make a Cartoon Yourself: Top 7 Animated Video Makers Compared Video production is not an easy and cheap matter. 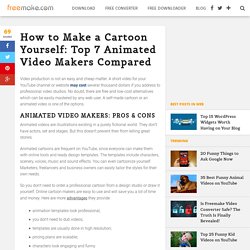 A short video for your YouTube channel or website may cost several thousand dollars if you address to professional video studios. No doubt, there are free and low-cost alternatives which can be easily mastered by any web user. A self-made cartoon or an animated video is one of the options. 16 Websites and Apps for Making Videos and Animation. Moovly - Online Software to Create Animated Videos and Presentations.

The Fox and the Child. Teaching Resources. The information, interactive tutorials and lesson plans in this kit have been designed as a resource to support teachers with little or basic knowledge about animation and as a resource for students. 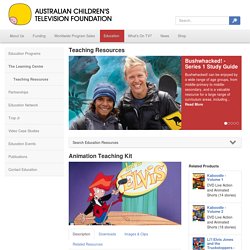 Animation has come to be regarded as a serous art form and it now encompasses the original forms of animation toys, cell (including children’s cartoons), pixillation, hand drawn and claymation as well as the newer forms of digital animation. Cartoons are the earliest form of media that attract children. Children need to become visually literate at a very young age. Viewing TV actually teaches them about real and fantasy and this is an important concept for them to acquire. Cartoons are the ideal form for the developing child in building up the concept of the difference between real and fantasy on TV. How to create a digital cartoon with toondoo.com.

After Effects Template To Create Cartoon Animated Promo Video. How To Use Parody To Get Your Videos Found & Shared All Over YouTube by PowToon! How do you make viral videos? How To Use Vine In The Classroom. Twitter continues to be a massive part of any connected learner’s education. 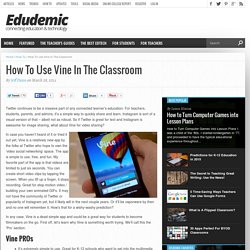 For teachers, students, parents, and admins, it’s a simple way to quickly share and learn. Instagram is sort of a visual version of that – albeit not as robust. So if Twitter is great for text and Instagram is awesome for image sharing, what about Vine for video sharing? In case you haven’t heard of it or tried it out yet, Vine is a relatively new app by the folks at Twitter who hope to own the ‘video social networking’ space. The app is simple to use, free, and fun. 8 Ways You Can Use Vine to Teach Reading Comprehension. By Guest Writer, Betsie Jonas (Reading Horizons Social Media Expert) As a social media junkie, I have used Vine in my personal life many times, and I have thought about how it could be used in education. 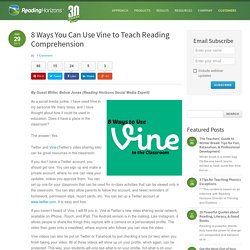 Does it have a place in the classroom? The answer: Yes. Twitter’s Vine: Five Classroom Activities. 4 Ways Higher Education Institutions Can Use Vine. This is a guest post by James Knight When Vine first came out (something we announced in Seriously Social News #7), the concept of six-second, looping videos seemed rather unassuming. 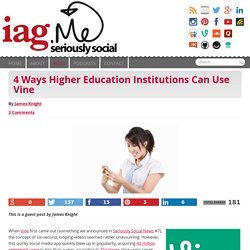 However, this quirky social media app quickly blew up in popularity, acquiring 40 million registered users in less than a year, according to The Verge. Five-Minute Film Festival: Vine and Instagram Video in the Classroom. Oh dear: our long-bemoaned short attention spans are dwindling into nothingness. 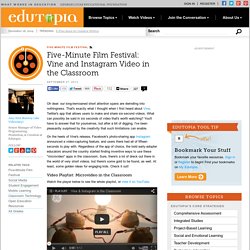 That's exactly what I thought when I first heard about Vine, Twitter's app that allows users to make and share six-second videos. What can possibly be said in six seconds of video that's worth watching? You'll have to answer that for yourselves, but after a bit of digging, I've been pleasantly surprised by the creativity that such limitations can enable. On the heels of Vine's release, Facebook's photo-sharing app Instagram announced a video-capturing feature, and users there had all of fifteen seconds to play with. Regardless of the app of choice, the bold early-adopter educators around the country started finding inventive ways to use these "microvideo" apps in the classroom. Best Free presentation Software and PowerPoint Alternative. Everyone agrees that Microsoft Powerpoint is so 20th century. 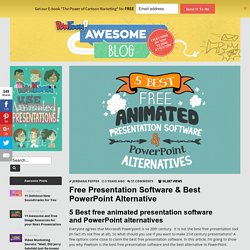 5 Best Prezi Alternatives - Business Presentation software by PowToon! In the last couple of years many people have been searching for innovative ways to create executive, unique, and memorable presentations. 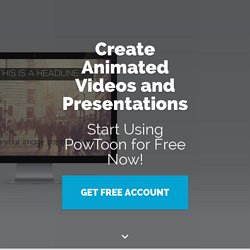 PowerPoint was exciting in the early days of its launch, but too many boring presentations led to the creation of new softwares like Prezi. Prezi presentations helped to prevent us from falling asleep during presentations, but the zooming in and out effects of their software, and limited manipulation capabilities, called for more options and new players in the presentation market. 1.

Frame By Frame: The Art of Stop Motion. Xtranormal. Camtasia Studio. Easily superimpose yourself into your videos and make it appear as though you're inside of your presentation, floating through outer space, or on a beach in Florida. 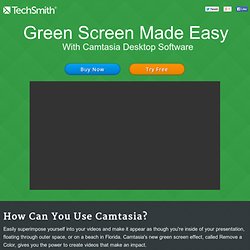 Camtasia's new green screen effect, called Remove a Color, gives you the power to create videos that make an impact. “I am currently working on my Ph.D., focusing on road safety. RawShorts - Explainer Video Software. Sparkol.