How Many Roses Does it Take to Make a Drop of Essence? « Bois de Jasmin. Growing and Processing Indigo. How to Memorize The Great Documents - Mr. Spitzer Social Studies. Government History Archive Schedule. 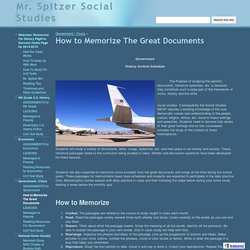 History of the Tlingit Indians. Sheldon Museum Tlingit History. "There is an old story that says how some strange people came from the western ocean. 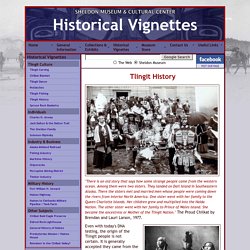 Among them were two sisters. They landed on Dall Island in Southeastern Alaska. There the sisters met and married men whose people were coming down the rivers from interior North America. One sister went with her family to the Queen Charlotte Islands. History - The Tlingit People. Hawaiian Encyclopedia : DNA Research on Polynesian Origins and Migrations. DNA Research on Polynesian Origins and Migrations [Illustration: DNA strand] We carry our histories within us, in our genes and in our DNA. 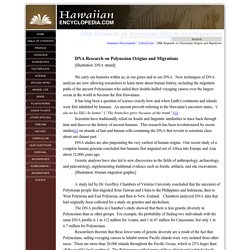 New techniques of DNA analysis are now allowing researchers to learn more about human history, including the migration paths of the ancient Polynesians who sailed their double-hulled voyaging canoes over the largest ocean in the world to become the first Hawaiians. Polynesia. An editor for academics. A Brief History of Writing.mov. Center for the Study of the First Americans. The Story of the First Americans When did modern humans colonize the Americas? 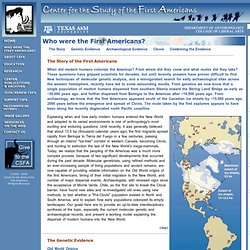 From where did they come and what routes did they take? These questions have gripped scientists for decades, but until recently answers have proven difficult to find. New techniques of molecular genetic analysis, and a reinvigorated search for early archaeological sites across the western hemisphere, recently have led to some astounding results. From genetics we now know that a single population of modern humans dispersed from southern Siberia toward the Bering Land Bridge as early as ~30,000 years ago, and further dispersed from Beringia to the Americas after ~16,500 years ago. 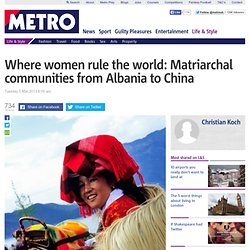 To mark International Women’s Day on Friday, we profile the world’s matriarchies. THE MOSUO, CHINA Deep in south-west China lies Lugu Lake, a place known as the Kingdom of Women. Here you’ll find the 40,000-strong Mosuo, one of the world’s last matrilineal societies. As befits a culture with no word for ‘father’ or ‘husband’, Mosuo women do not marry. Instead, they take as many lovers as they wish, cherry-picking them from within the tribe and inviting them for secret evening trysts (usually after the men have spent all day slaughtering pigs, while females sort out household finances). Corinth. Corinth.pdf. Mediterranean House Gecko Care. Named for their habit of living on, in and near the homes of people, Mediterranean house geckos are common inhabitants of many anthropogenically altered habitats. 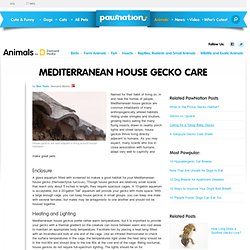 Hiding under shingles and shutters, growing heavy eating the many flying insects drawn to nearby porch lights and street lamps, house geckos thrive living directly adjacent to humans. As you may expect, many lizards who live in close association with humans, adapt very well to captivity and make great pets. Mediterranean house geckos are primarily insectivorous; they will thrive on a diet of crickets, mealworms, waxworms, silkworms and roaches.

Provide your gecko with five to six weekly feedings, each consisting of several insects. Do not allow uneaten crickets to roam the enclosure, as they may chew on your gecko’s skin. Author. Bartolomeu Dias - Exploration. In early January 1488, as Dias’ two ships sailed off the coast of South Africa, storms blew them away from the coast. 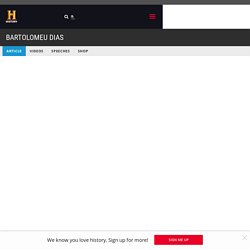 Dias is thought to have ordered a turn to the south of about 28 degrees, probably because he had prior knowledge of southeasterly winds that would take him around the tip of Africa and keep his ships from being dashed on the notoriously rocky shoreline. João and his predecessors had obtained navigational intelligence, including a 1460 map from Venice that showed the Indian Ocean on the other side of Africa. Dias’ decision was risky, but it worked. The crew spotted landfall on February 3, 1488, about 300 miles east of present-day Cape of Good Hope. Marco Polo - Biography - Explorer, Journalist. Venetian merchant and adventurer Marco Polo traveled from Europe to Asia from 1271 to 1295. 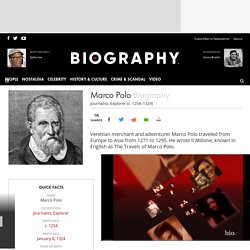 He wrote Il Milione, known in English as The Travels of Marco Polo. Synopsis Marco Polo was born in 1254, in Venice, Italy. He traveled extensively with his family, journeying from Europe to Asia from 1271 to 1295. He remained in China for 17 of those years. Early Life. Imago Mundi: International Journal for the History of Cartography. Phrygia (ancient district, Turkey) Phrygia, ancient district in west-central Anatolia, named after a people whom the Greeks called Phryges and who dominated Asia Minor between the Hittite collapse (12th century bc) and the Lydian ascendancy (7th century bc). 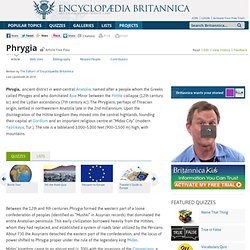 The Phrygians, perhaps of Thracian origin, settled in northwestern Anatolia late in the 2nd millennium. Upon the disintegration of the Hittite kingdom they moved into the central highlands, founding their capital at Gordium and an important religious centre at “Midas City” (modern Yazılıkaya, Tur.). The site is a tableland 3,000–5,000 feet (900–1,500 m) high, with mountains. Com - articles on phrygia, phrygians, ancient history, religion.

Phrygia, Gordion, and King Midas in the Late Eighth Century B.C. Phrygia is the Greek name of an ancient state in western-central Anatolia (modern Turkey), extending from the Eskishehir area east to (perhaps) Bogazköy and Alishar Hüyük within the Halys River bend. 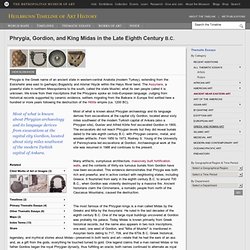 The Assyrians, a powerful state in northern Mesopotamia to the south, called the state Mushki; what its own people called it is unknown. We know from their inscriptions that the Phrygians spoke an Indo-European language. Judging from historical records supported by ceramic evidence, settlers migrating from the Balkans in Europe first settled here a hundred or more years following the destruction of the Hittite empire (ca. 1200 BC). Watch Mankind The Story of All of Us Full Episodes & Videos Online. Timeline. Timeline allows students to create a graphical representation of an event or process by displaying items sequentially along a line. Timelines can be organized by time of day, date, or event, and the tool allows users to create a label with short or long descriptive text. Adding an image for each label makes a timeline more visually appealing. Add, drag, and rearrange items as needed.

Saving capability allows students to return to their work and make revisions, and they can share their final work via e-mail. Beautiful web-based timeline software. Research — Timeline of Events. Technology Timeline. This timeline features Premodern example of nanotechnology, as well as Modern Era discoveries and milestones in the field of nanotechnology. Early examples of nanostructured materials were based on craftsmen’s empirical understanding and manipulation of materials.

Use of high heat was one common step in their processes to produce these materials with novel properties. 4th Century: The Lycurgus Cup (Rome) is an example of dichroic glass; colloidal gold and silver in the glass allow it to look opaque green when lit from outside but translucent red when light shines through the inside. (Images at left.) Interactive Timeline / About Us. Inside WWII — History.com Interactive Games, Maps and Timelines. Topics - History.com. You're almost done! You will soon receive an activation email. Once you click on the link, you will be added to our list. If you do not receive this email, please contact us. Current Anthropology. Nasca Lines. In 1986 Reinhard reported finding ruins of a ceremonial stone circle at the summit of Illakata, at over 14,000 feet one of the tallest mountains feeding runoff to the Nasca drainage system.

Along with other traces of ritual activity at the top of Nasca watersheds, the discovery led him to propose that one of the main purposes of the Nasca lines was related to the worship of mountain deities, including Cerro Blanco, because of their connection to water. Decapitated Skeleton of a Nascan Man & Head Jar. History of the 1886 Crescent Hotel and Spa in Eureka Springs, Arkansas. The 1886 Crescent Hotel and Spa has a rich and fascinating history. Ancient Legends and Artifacts. American History - Browse by Topic. The history of ancient America, interior to the... George Jones: Man of Great Principles - Poultney Vermont Historical Society - Poultney Vermont Historical Society.

HTST303-F2014-syllabus.pdf. HSI: Historical Scene Investigation. The United States’ oldest great civilization: Cahokia? When we studied Native American history in school, we learned about many tribes. Rock Art by Native Americans in Nevada. Nevada is a key location for viewing ancient Native American rock art in the form of petroglyphs and pictographs, much of it thousands of years old. Native American Netroots. Microsoft Word - Primary Sources New.doc - PrimarySourceLessons1.pdf. BBC History - BBC History. Native Americans: North America’s First Inhabitants. First Humans Found to Enter North America in Three Waves. The earliest people to enter North America came in three waves, rather than a single migration, according to evidence comparing the DNA of native groups in Canada and South America with those in Siberia.

Scientists have believed the Americas were populated by ancestors who entered through an Asian-American land bridge that existed in northern Canada 15,000 years ago. When Did Humans Come to the Americas? Ancient Migration Patterns to North America Are Hidden in Languages Spoken Today. Lagomarsino Canyon Petroglyph Site - Nevada Rock Art. Skull in Underwater Cave May Be Earliest Trace of First Americans. The Clovis Point and the Discovery of America’s First Culture. Prehistoric Humans Cross the Atlantic — History.com Video. The First People to Settle Across North America's Arctic Regions Were Isolated for 4,000 Years.