Bear finds a voice. 20 Creative Ways to Use Social Media for Storytelling. Storytelling has always played a part in successful marketing. 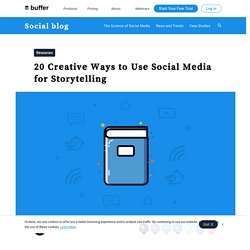 Stories enable us to build personality and create a connection with consumers. But can we actually tell a story on social media? Digital Storytelling. Timeline.

Apps and tools. Digital Storytelling: What it is… And… What it is NOT. I was lucky to have shared my childhood bedroom for a few years with my grandmother, when she had come to live with us after an illness. 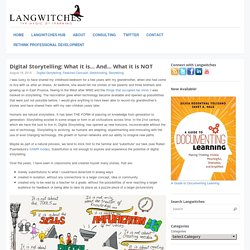 At bedtime, she would tell me stories of her parents and three brothers and growing up in East Prussia, fleeing to the West after WW2 and the things that occupied her mind. Using the digital to bring out the human – FutureWe. On 6 May 2018 (7 May in Australia), around 100 educators from 5 continents, 12 countries, came together via YouTube and Google Hangouts — and changed professional development forever. 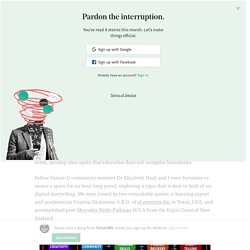 #MADPD (Make A Difference) is the brainchild of two extraordinary Canadian teachers, Peter Cameron and Derek Rhodenizer, who brought this virtual unconference event to fruition by frenzied networking in Real Life and on social media, particularly Twitter. Though the majority of presenters were Canadian (#MADPD trended on Canadian Twitter for the entire day, earning around two million impressions), there were presentations from the USA, the UK, Ireland, Israel, Thailand, Australia, New Zealand — a truly global event, proving once again that education does not recognise boundaries. Unleash Your Students’ Voices: Digital Storytelling – Brave In The Attempt.

You can also check out the post on using The Power of Storytelling. 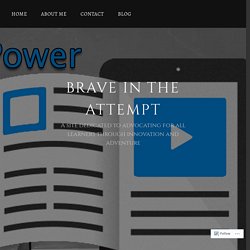 As I’ve said, regardless of age, ability, or language, everybody has something to say. Previously I discussed why storytelling is one of the most persuasive and powerful tools there is, what happens in the brain when stories are told, and how to use it effectively with your students. The struggle comes when students encounter frustration somewhere between embodying their story and trying to express it in the manner the teacher dictates. This can often be resolved if the teacher broadens their perspective in how stories can be created to include more than just words jotted onto notebook paper. There are a few basic strategies you can adopt depending on the needs and the severity of a student’s challenges. 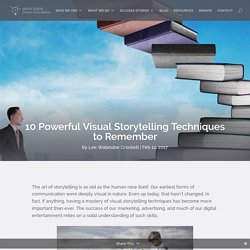 Our earliest forms of communication were deeply visual in nature. Even up today, that hasn’t changed. In fact, if anything, having a mastery of visual storytelling techniques has become more important than ever. Digital Storytelling Across the Curriculum. Find content’s deeper meaning “By telling thoughtful stories, we clarify our own thinking about what we have learned to share with others in a profound way that sticks with us over time.” 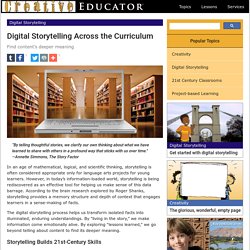 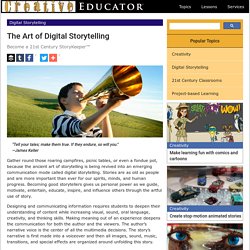 Cybrary Man's Digital Storytelling collection. Teenage reading and Tumblr - Adele Walsh - ABC Splash - Reading has always been seen as a solitary pursuit but with the emergence of the Internet this is changing. 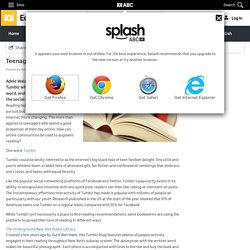 This more than applies to teenagers who spend a good proportion of their day online. How can online communities be used to augment reading? One word. Tumblr. Tumblr could be kindly referred to as the internet's big black hole of teen fandom delight. Like the popular social networking platforms of Facebook and Twitter, Tumblr's popularity exists in its ability to encapsulate intention with one quick post; readers can then like, reblog or comment on posts. While Tumblr isn't necessarily a place to find reading recommendations, some bookworms are using the platform to spread their love of reading in different ways.

The Underground New York Public Library Created a few years ago by Ourit Ben-Haim, this Tumblr blog features photos of people actively engaged in their reading throughout New York's subway system. Transmedia Storytelling. Transmedia storytelling occurs when integral elements of a particular narrative are dispersed across multiple delivery channels using multiple media for the purpose of creating an integrated and coordinated storytelling experience. 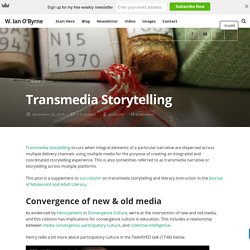 This is also sometimes referred to as transmedia narrative or storytelling across multiple platforms. Joe Sabia: The technology of storytelling. 8 Steps To Great Digital Storytelling – Transform Learning ~ written by Samantha Morra. First appeared on Edudemic. 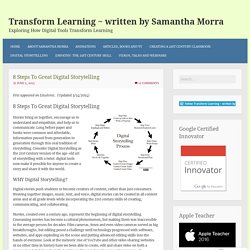 (Updated 3/14/2014) Stories bring us together, encourage us to understand and empathize, and help us to communicate. Andrew Fitzgerald: Adventures in Twitter fiction. Consider Twitter Fiction. Twitter Fiction Reveals The Power Of Very, Very Short Stories. “For Sale: Baby shoes, never worn.” So goes Ernest Hemingway’s famous six-word story, which, in spite of being perfectly compact, manages to paint a complete picture of thwarted desire and elicit strong feelings from the reader (unless said reader is heartless).

It would’ve been the perfect candidate for this year’s #TwitterFiction Festival, where writers such as Margaret Atwood and Celeste Ng will practice crafting very brief tales online, beginning on May 11. What makes a Twitter story different from an ordinary tweet? Novelist David Mitchell publishes new short story on Twitter. David Mitchell, the award-winning author of Cloud Atlas, this morning turns to the "diabolical treble-strapped textual straitjacket" of Twitter for the first time to tell a new short story, The Right Sort. Mitchell will unveil his tale, about a boy tripping on his mother's Valium pills, in Twitter's 140-character bursts for the next seven days.

He follows in the footsteps of authors from Jennifer Egan to Neil Gaiman and Philip Pullman, who have also experimented with the social media medium; there is even a Twitter fiction festival. The novelist has set up a new Twitter account, @david_mitchell, for the story; his previous account has only previously been used to release information about his books and appearances.