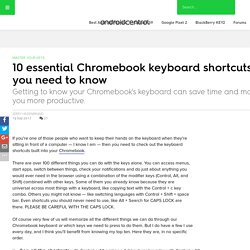 There are over 100 different things you can do with the keys alone. You can access menus, start apps, switch between things, check your notifications and do just about anything you would ever need in the browser using a combination of the modifier keys (Control, Alt, and Shift) combined with other keys. Some of them you already know because they are universal across most things with a keyboard, like copying text with the Control + c key combo. Others you might not know — like switching languages with Control + Shift + space bar. Two Powerful Formative Assessment Tools for the Chromebook Classroom.

As more and more Chromebooks hit the classroom, redefining instruction and instructional practices is getting easier and easier – you just have to know where to start. 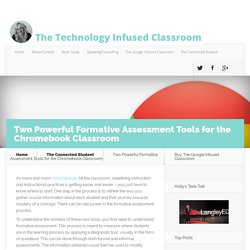 One step in the process is to rethink the way you gather crucial information about each student and their journey towards mastery of a concept. There can be real power in the formative assessment process. To understand the richness of these new tools, you first need to understand formative assessment. This process is meant to measure where students are in the learning process by applying a diagnostic tool, usually in the form of questions. This can be done through both formal and informal assessments. Here are two assessment tools that are perfect for the Chromebook classroom. Google Chromebooks fight malware, get security experts' approval. When the team behind Google's Chrome OS software and Chromebooks set out to reinvent the laptop, it quickly zeroed in on security as an area where it could bring a fresh perspective. 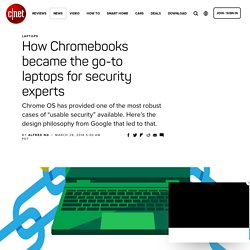 "On Chrome OS, we were like, 'We control all the pieces. We can do better,'" Will Drewry, a principal software engineer for Google's devices, and one of the founding fathers of the Chromebook, said in an interview in January. The team wanted to build something that would fit this generation's needs, as well as address the rising crop of threats facing PCs. Caution: Chromebooks – Gary S. Stager, Ph.D. – Medium. I am often asked about the adoption of Chromebooks and have spent months agonizing how to respond. 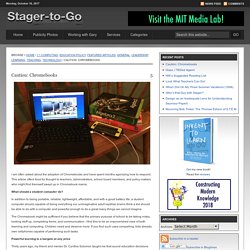 This article offers food for thought to teachers, administrators, school board members, and policy makers who might find themself swept up in Chromebook mania. What should a student computer do? In addition to being portable, reliable, lightweight, affordable, and with a good battery life, a student computer should capable of doing everything our unimaginative adult reptilian brains think a kid should be able to do with a computer and powerful enough to do a great many things we cannot imagine. The Chromebook might be sufficient if you believe that the primary purpose of school to be taking notes, looking stuff up, completing forms, and communication. I find this to be an impoverished view of both learning and computing. Powerful learning is a bargain at any price Thirty years ago, my friend and mentor Dr. Is a Chromebook the right computer for me? - Recode.

If you could look past the robots and smart hairbrushes, there were several new Chromebooks at this year’s CES. 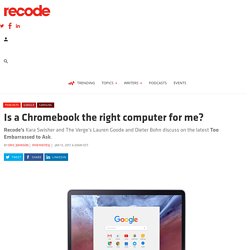 Six Months With Chrome OS – Hacker Noon. Touchscreen Chromebooks: the iPad killers in schools? iPads were a force in education. 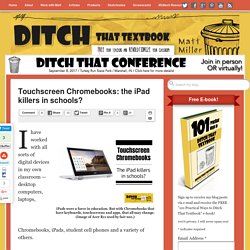 Control Alt Achieve: Lit Trips on Chromebooks with the New Google Earth. Google Lit Trips have been a popular learning activity for many years. 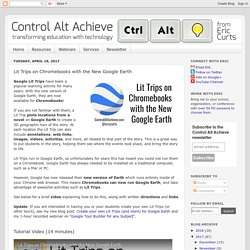 With the new version of Google Earth, they are now available for Chromebooks! If you are not familiar with them, a Lit Trip plots locations from a novel on Google Earth to create a 3D geographic tour of the story. At each location the Lit Trip can also include annotations, web links, images, videos, activities, and more, all related to that part of the story. This is a great way to put students in the story, helping them see where the events took place, and bring the story to life. 10 Google Drive Activities Teachers Can Do Using Chrome Apps. March 5, 2017 Upon the request of some of our readers here in EdTech and mLearning. we went ahead and created the infographic below which you can download and share in PDF format from this link. 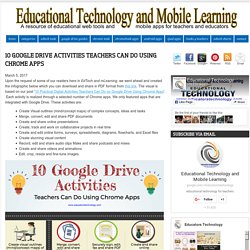 The visual is based on our post '10 Practical Digital Activities Teachers Can Do on Google Drive Using Chrome Apps'. Each activity is realized through a selected number of Chrome apps. We only featured apps that are integrated with Google Drive. Switching to Chromebook: 8 Apps to Replace Your Desktop Favorites. 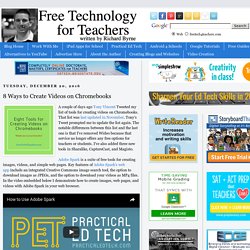 That list was last updated in November. Tony's Tweet prompted me to update the list again. The notable differences between this list and the last one is that I've removed Wideo because that service no longer offers any free options for teachers or students. Clever. Why a Chromebook isn't the same thing as a budget laptop - CNET. Android Apps for Chromebook: Hands-On Review. Google Play is rolling out onto Chromebooks, meaning the web-only operating system will soon offer millions of local applications. 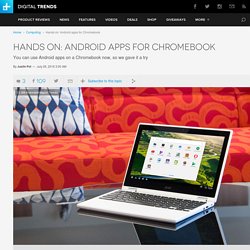 Three devices currently offer Android apps for users brave enough to switch to Developer builds of Chrome OS — the Asus Chromebook Flip, the 2015 Chromebook Pixel, and Acer’s Chromebook R11. As it happens, I recently reviewed the Chromebook R 11, and Digital Trends still has it kicking in our closet full of laptops. Jealous of all the cool screenshots I saw on Twitter, and curious about how well Android apps work on the platform, I decided to switch the OS to Developer builds and take a look for myself.

Android apps are the new normal When I started up the latest development build of Chrome OS, one thing stood out: Google sees Android apps as the future. But I’m getting ahead of myself. You can browse and download apps. 10 essential Chromebook keyboard shortcuts you need to know. Getting to know your Chromebook's keyboard can save time and make you more productive. 9 reasons your next PC should be a Chromebook. Make an Easy Switch to Chromebook Now (and Never Look Back) I’ve always been a Windows guy, at least as long as I’ve been working for MakeUseOf.

Windows 95, Windows ME, XP, Windows 7… like many of you I’ve adopted, studied the OS, adapted, and eventually learned to love each of them for different reasons. Are you curious to know why as of today, I’m a Chromebook guy? There are plenty of reasons you may consider switching your OS of choice. If you’re like me, you might have considered trying out a Linux distro or two that looked most like the latest Windows OS, but never had the courage or the time to try.

Maybe you even considered switching to a Mac. I personally couldn’t find the time to choose, install and test a Linux distro, and after helping students working on the Mac workstations back in college, I swore that it would be the one OS I would never use. Six Tools for Creating Videos on Chromebooks. As I've written many times over the years, creating videos is one of my favorite classroom projects. Recently, I shared some of my tips for planning classroom video projects. Shortly after publishing those tips I was asked for a recommendation for creating videos on Chromebooks. Here are some of my go-to video creation tools to use on Chromebooks. WeVideo offers the most features of any of the tools in this list. Edit Google Drive documents offline - Chromebook Help. 3 of The Best Chromebook Tools for Creating and Editing Videos. June 15, 2015 Video editing is no longer the preserve of tech geeks.

The proliferation of web based tools makes it super easy for anyone with rudimentary knowledge to embark on editing and creating beautiful footages. We have already reviewed several of these tools in previous posts but today we are featuring 3 excellent applications specifically for Chromebook users. 10 Keyboard Shortcuts Every Chromebook Owner Should Know.

100 Best Chromebook Tips, Tricks and Time Savers. Extensions and Web Apps - Chromebook Classroom. Run Google Earth on Chromebook. Chromebooks in school: How to pick the best laptop for any student. The Chromebook as Signifier. The Chrome OS Challenge: A New User's Day on a Chromebook. 4 Chromebook Trackpad Tips That Will Blow Your Mind.