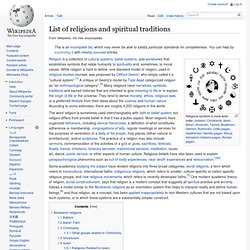 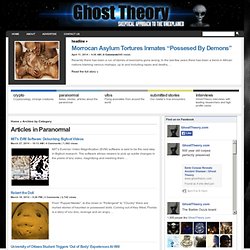 The software allows viewers to pick up subtle changes in the pixels of any video, magnifying and meshing them … Robert the Doll From “Puppet Master”, to the clown in “Poltergeist” to “Chucky” there are myriad stories of haunted or possessed dolls. Coming out of Key West, Florida is a story of voo doo, revenge and an angry … University of Ottawa Student Triggers ‘Out of Body’ Experiences At Will “She’s able to bring on this experience pretty much on demand,” Messier, a professor in the university’s School of Psychology, said Monday.

In addition to being the foremost online destination for information about the supernatural, unusual phenomena and the occult, Occultopedia also features a variety of resources for the pagan community, new age buffs, unexplained phenomena enthusiasts, curious minds, and skeptics as well.Occultopedia is the genuine article, the original and the best internet index of the extraordinary and uncanny, shamelessly copied by many, but never equaled. Online since 1995 — at first in a free web space provider, and in 1997 finally with its own domain name and hosting — Occultopedia still is the principal online resource for those looking for the unexplained, the curious and the unusual.

Occultopedia is a work in progress, and is not completed. There are so many aspects to the occult and the extraordinary, it would be next to impossible to actually finish such a project. ASTROLABE: #1 Free Astrology Birth Chart Online: Astrolabe's Free Astro Chart, Horoscope Data Input Page.

Why Awaken Kundalini? Everybody should know something about kundalini as it represents the coming consciousness of mankind. 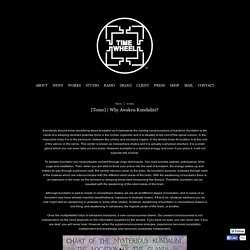 Kundalini is the name of a sleeping dormant potential force in the human organism and it is situated at the root of the spinal column. In the masculine body it is in the perineum, between the urinary and excretory organs. In the female body its location is at the root of the uterus, in the cervix. This center is known as mooladhara chakra and it is actually a physical structure. It is a small gland which you can even take out and press. To awaken kundalini you must prepare yourself through yogic techniques. What is Kundalini and how to Activate it?

I can recall in my spiritual journey a time of inner purification, which steadily integrated and unleashed soul through my being. 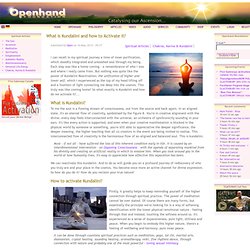 Each step was like a home coming - a remembrance of who I was and where I really came from. But nothing was quite like the power of Kundalini Reactivation: the unification of higher and lower self, which I experienced as the top of my head lifting off and a fountain of light connecting me deep into the cosmos. This truly was like coming home! So what exactly is Kundalini and how do we activate it?... What is Kundalini? To me the soul is a flowing stream of consciousness, out from the source and back again.

Most - if not all - have suffered the loss of this inherent condition early in life. We can reactivate this kundalini. How to activate Kundalini? Firstly, it greatly helps to keep reminding yourself of the higher connection through spiritual practice. How People Steal Your Power, Energy and Soul. OPEN HAND – What is Kundalini? – How to Activate it? – 5-10-14. Image Source There’s a profound spiritual possibility open to all people: the opportunity to be absolutely connected to the source of all life, and have that energy steer us in the direction of destiny. 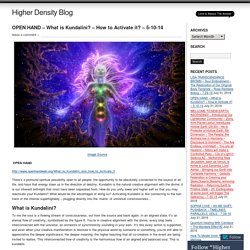 Kundalini is the natural creative alignment with the divine; it is our inherent birthright that most have been separated from. How do you unify lower and higher self so that you may reactivate your Kundalini? The Predictions and Prophecies. Chakras & BioMagnetism. Ascended Masters <3. Incarnation & Karmic Understandings. The Frayed Angels. Galactic Messages Of Light Angelic Guides October 17 2012. The Hathors of Earths Solar Astral Planes: Atlantis-Era Energy Gates, Responsibility of Lightworkers and the Interconnection of all Life - Wes Annac - January 2, 2012. The year of magic, 2012 is now upon you all...we applaud all of you dear Light bearers who are incarnate on Gaia’s surface, in many times under the most difficult of circumstances, as your Light has been added to the mix of collective energy on Earth...Many of you are now finding your way out of quite a long, dark and at times confusing tunnel...You are soon to know and feel fully of what we speak of...what you are to now experience in this year 2012 will be unlike anything, any invocation you have felt before. 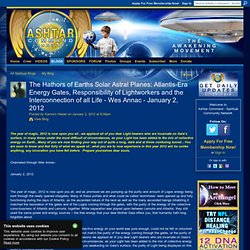