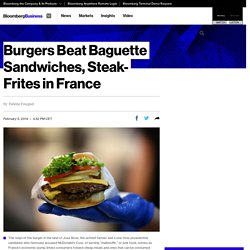 Three-quarters of France’s 110,000 restaurants now include the American bun-and-beef classic on their menus. Their sales have jumped 40 percent since 2011 and the burger is beating the traditional premium meat and fish dishes, the study showed. “Protein between two slices of bread -- the French love it,” Bernard Boutboul, head of Paris-based restaurant researcher Gira Conseil, said in an interview. “The explosion of burgers is coming from restaurants. Why do the French love McDonald's so much? In the country that invented haute cuisine – Janine Marsh, editor of The Good Life France, asks "Just why are the French so-Mcdo-pro? 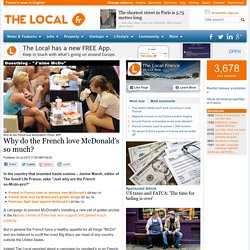 " A campaign to prevent McDonald's installing a new set of golden arches in the historic centre of Paris has won support and gained much publicity. But in general the French have a healthy appetite for all things "McDo" and are believed to scoff the most Big Macs per head of any country outside the United States. Indeed The Local reported about a campaign by resident's in on French town last year, who grew increasingly angry at delays to the opening of their new fast-food restaurant. Here Janine Marsh, editor of the Good Life France website explore why exactly, the French of all people are so McDo pro: "Lots of people around the world are completely bemused by the fact that French people want a McDo (as it’s affectionately called here in France) at all. 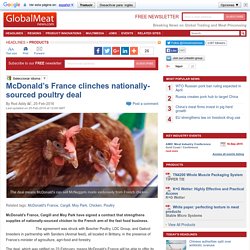 The deal, which was ratified on 23 February, means McDonald’s France will be able to offer its customers McNuggets made exclusively from chicken breast originating from within the country. The restaurant chain expects to source almost two thirds of its chicken meat from French farms in 2016, double the proportion it drew on four years ago. ‘Qualitative partnership’ “We have the will to develop not only a quantitative but also a qualitative partnership with French agriculture,” said Nawfal Trabelsi, president of McDonald’s France.

“We are pleased that the minister recognises our commitment.” The contract establishes a set purchase price for one year, protected against market fluctuations and offering guaranteed returns to ranchers, loggers and processors. McDonald’s France apologises after staff ordered not to give meals to homeless. McDonald’s France has got itself in hot water over a note telling staff they could no longer donate their staff meals to the homeless. 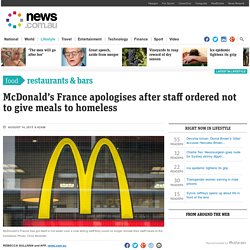 Photo: Chris McGrath. McDONALD’S France was forced to apologise on Wednesday after an internal note reportedly ordered staff not to hand out food to “tramps” was posted online. The note was posted on Facebook by French consumer group 60 Millions de Consommateurs, which translates to “60 Million Consumers”. “Following an incident on July 25, it is formally forbidden to give food to tramps,” says the note, which is signed by the management of a restaurant in the French Riviera. “As a reminder, staff meals must be eaten on the premises. Burger King Takes on McDonald's in France With Quick Purchase. Berkshire Hathaway Inc., the conglomerate controlled by billionaire Warren Buffett, said fourth-quarter profit climbed 32 percent on investments and earnings from the company’s expanding stable of operating businesses. 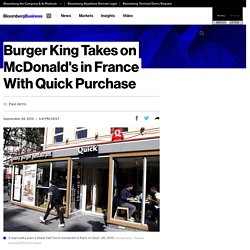 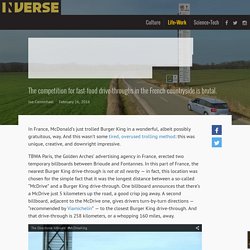 And this wasn’t some tired, overused trolling method: this was unique, creative, and downright impressive. TBWA Paris, the Golden Arches’ advertising agency in France, erected two temporary billboards between Brioude and Fontannes. In this part of France, the nearest Burger King drive-through is not at all nearby — in fact, this location was chosen for the simple fact that it was the longest distance between a so-called “McDrive” and a Burger King drive-through.

One billboard announces that there’s a McDrive just 5 kilometers up the road, a good crisp jog away. Burger King Had a Pretty Good Comeback to That Big, Insulting McDonald's Billboard. Last week, we wrote about that obnoxious and ludicrous (and OK, pretty entertaining) McDonald's billboard in France that displayed absurdly lengthy driving directions to the nearest Burger King drive-thru. 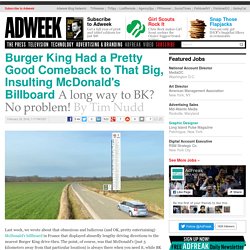 The point, of course, was that McDonald's (just 5 kilometers away from that particular location) is always there when you need it, while BK (258 km away) just isn't. But given Burger King France's own irreverent marketing through ad agency Buzzman, we fully expected some kind of response to the McDonald's stunt. And here it is—a new video that shows the McDonald's billboard, and how one couple driving past it apparently reacted. Check out the video here: Yes, BK has smartly and comically turned the issue from one of simple availability into one of exclusivity.