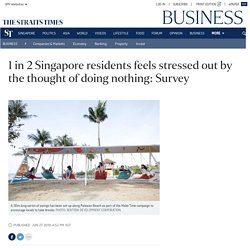 Of 600 Singaporeans and permanent residents polled in a recent survey, three in 10 said they did not know how to relax and half said they were stressed out by the thought of doing nothing. This is despite 52 per cent of those surveyed saying they felt stuck in a daily routine they were unable to get out of, and 74 per cent wishing they could spend more time with their families and loved ones. The survey, commissioned by Sentosa Development Corporation (SDC) and conducted online in April, also found that excluding mealtimes, people spent only 2.8 hours of leisure time on average with family and friends, or just slightly over 1 per cent of a week.

Experts discussing the findings on Thursday (June 27) at a media event said that making time for self and family requires deliberate adjustments. "Balance is impossible... The idea of work-life harmony has come to the fore recently. One-quarter of workers report high stress levels, Health News. More Singaporean workers are reporting high stress levels, even though the vast majority say they are coping well. 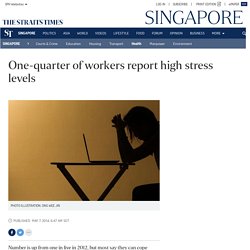 One in four workers polled by the Health Promotion Board (HPB) for an annual survey last year said they were highly stressed, up from one in five in 2012. At the same time, however, 94 per cent said they were able to cope with their stress levels "reasonably well". The poll involved more than 8,000 Singaporeans aged between 18 and 74. It was the group between 18 and 69 - the "working population" - that saw an increase in stress. This is the largest proportion of people reporting high stress levels since 2010, when the annual survey was first carried out. Singapore's most stressed out millennials on working long hours and dealing with anxiety at work. I can't remember the last time I heard a young Singaporean say that they were genuinely excited about the prospect of getting into the office in the morning, even if they were deeply passionate about their field of work. 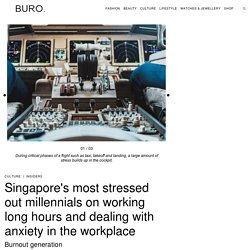 Instead, often times, they expose a toxic work environment where stress and anxiety skyrocket while self-confidence plummets as a result of slave-driving superiors, a overwhelming workload, miserable working hours that extend far beyond the standard 9-to-5 with no reward, and even the possibility of retrenchment in the near future. If all the above sounds a little too dire to be true, you'll only need to look at the findings of the 2019 Cigna Well-Being Survey, which revealed a staggering 92 per cent of of working Singaporeans feel stressed in the workplace with debilitating effects such as lowered morale. If there's one thing I've taken away from their responses, it's that all of us have the ability to manage stress and anxiety. News: Singaporeans among the most stressed at work globally — People Matters. 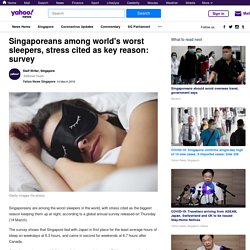 The survey shows that Singapore tied with Japan in first place for the least average hours of sleep on weekdays at 6.3 hours, and came in second for weekends at 6.7 hours after Canada. Globally, people averaged 6.8 hours of sleep on weekdays and 7.8 hours on weekends, according to the survey commissioned by Dutch technology company Philips. The daily recommended hours of sleep is eight. “It’s worrying that Singaporeans are still ranked among the world’s poorest sleepers, despite public awareness around the importance of quality sleep for overall health,” said Ivy Lai, Philips Singapore’s country manager.

Respondents in Brazil slept the most on average during weekdays (7.2 hours) while those in China slept the most on average during weekends (8.5 hours). Weeknights Weekend nights Other Singapore stories: S'pore workplace stress on the rise: survey, Government & Economy. Sat, Aug 27, 2016 - 5:50 AM Singapore SOME of you probably already feel that the office is a grim place. 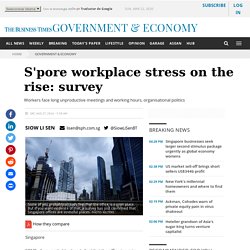 But if you want evidence of that, a survey has just confirmed that Singapore offices are stressful places. The survey "Working in Asia", by Roffey Park, has found that not only do Singapore workers spend more hours at work relative to their Hong Kong and China peers, more than half (52 per cent of Singapore workers surveyed) say their stress level has gone up over the last six months. Among Hong Kong workers, the figure is 43 per cent; among China workers, 45 per cent.

Forty per cent of Singapore workers polled named office politics as a major stressor; 35 per cent cited workload and 35 per cent, lack of support. Stay updated with BT newsletters The survey found workload, lack of support and organisational politics to be the top three sources of workplace stress for workers across China, Hong Kong and Singapore. "This results in a burnout culture.