What is stress for working adults and how to cope with it?

For working adults, stress is not common to them. But what stress do they face? 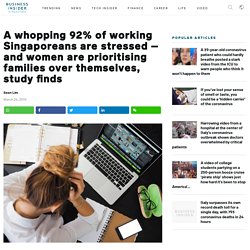 A vast majority of working Singaporeans are under stress, and women in particular feel that it’s less manageable, a survey has found. In the 2019 Cigna 360 Well-Being Survey, a whopping 92 per cent of working Singaporeans report feeling stressed, higher than the global average of 84 per cent. Of this, 13 per cent say their stress is unmanageable, which is on par with the global average, according to the study which surveyed a total of 13,200 online interviews in 23 markets, including 502 residents in Singapore. And stress doesn’t go undetected in the workplace. Read also: 6 in 10 Singaporeans admit that they don’t leave work on time just to ‘show face’ Noticing colleagues’ stress in turn makes respondents more self-aware, it seems. 30 per cent of respondents feel more conscious about managing their own stress upon seeing others stressed at work.

Women prioritise families over themselves. 60% of Singaporean staff experience above average stress levels. Are Singaporean employers doing enough when it comes to health and well-being programmes? 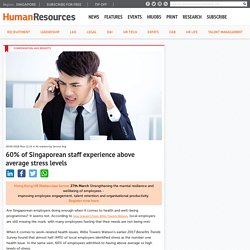 It seems not. According to new research from Willis Towers Watson, local employers are still missing the mark, with many employees feeling that their needs are not being met. When it comes to work-related health issues, Willis Towers Watson’s earlier 2017 Benefits Trends Survey found that almost half (44%) of local employers identified stress as the number one health issue. In the same vein, 60% of employees admitted to having above average or high levels of stress. Despite this, the survey revealed only 27% of employers are actually taking action to reduce work-related stress. Apart from work related stress, global findings revealed that stress can also arise from financial insecurity. Facing depression: Working adults battle not just demons, but also stigma. SINGAPORE: Outwardly, his wife and two young sons are his sources of joy.

He seems a regular family man when he's with them. What is less apparent is that Mr Mak Kean Loong struggles to feel emotions like happiness. “In the past few years, I think I’ve never even felt that emotion,” said the bespectacled 38-year-old, who speaks with the numbed air of a tired man. At first, they all thought he was “just becoming extra introverted”. It was, in fact, his descent into depression. "I didn’t tell my wife," he said. “The first part of the process was to bring my boys and my wife out for a good meal, for them to have something to remember me by. He didn't go through with the suicide. And it's that loss of that part of him that sits bitterly. It does hurt when I see people in office clothes. About 7 per cent of Singapore’s workforce has a history of mental illness. WATCH: One family man's demons (5:58).

One of the main battles they must fight is perceived stigma among employers. Where to find help: Physical Activity Reduces Stress. Stress is an inevitable part of life. 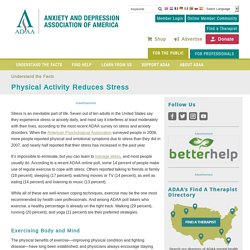 Seven out of ten adults in the United States say they experience stress or anxiety daily, and most say it interferes at least moderately with their lives, according to the most recent ADAA survey on stress and anxiety disorders. When the American Psychological Association surveyed people in 2008, more people reported physical and emotional symptoms due to stress than they did in 2007, and nearly half reported that their stress has increased in the past year. It’s impossible to eliminate, but you can learn to manage stress, and most people usually do. According to a recent ADAA online poll, some 14 percent of people make use of regular exercise to cope with stress. Others reported talking to friends or family (18 percent); sleeping (17 percent); watching movies or TV (14 percent), as well as eating (14 percent) and listening to music (13 percent).