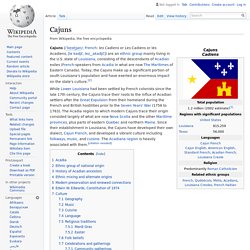 Today, the Cajuns make up a significant portion of south Louisiana's population and have exerted an enormous impact on the state's culture.[2] Acadia[edit] Ethnic group of national origin[edit] The Cajuns retain a unique dialect of the French language and numerous other cultural traits that distinguish them as an ethnic group. Cajuns were officially recognized by the U.S. government as a national ethnic group in 1980 per a discrimination lawsuit filed in federal district court. We conclude that plaintiff is protected by Title VII's ban on national origin discrimination. History of Acadian ancestors[edit] The Acadians were scattered throughout the eastern seaboard. 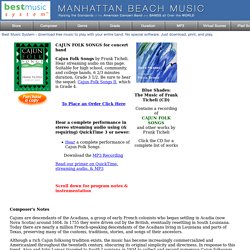 In 1755 they were driven out by the British, eventually resettling in South Louisiana. Today there are nearly a million French-speaking descendants of the Acadians living in Louisiana and parts of Texas, preserving many of the customs, traditions, stories, and songs of their ancestors. Although a rich Cajun folksong tradition exists, the music has become increasingly commercialized and Americanized throughout the twentieth century, obscuring its original simplicity and directness.

In response to this trend, Alan and John Lomax traveled to South Louisiana in 1934 to collect and record numerous Cajun folksongs in the field for the Archive of Folk Music in the Library of Congress. By doing so, they helped to preserve Cajun music in its original form as a pure and powerful expression of Louisiana French Society. Introduction to Cajun, Louisiana Creole & zydeco music. By Jim Hobbs Cajun, Louisiana Creole & Zydeco Music Search home Who are the Cajuns? 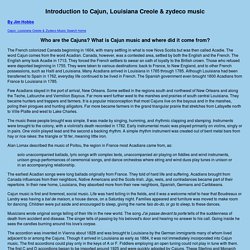 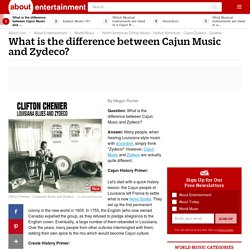 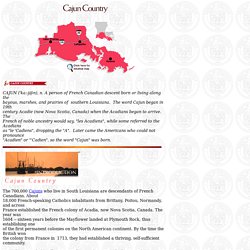 A person of French Canadian descent born or living along the bayous, marshes, and prairies of southern Louisiana. The word Cajun began in 19th century Acadie (now Nova Scotia, Canada) when the Acadians began to arrive. The French of noble ancestry would say, "les Acadiens", while some referred to the Acadians as "le 'Cadiens", dropping the "A". Later came the Americans who could not pronounce "Acadien" or "'Cadien", so the word "Cajun" was born. Establishing Borders: The Expansion of the United States, 1846-48. Between 1803 and 1853, the United States almost tripled in size. 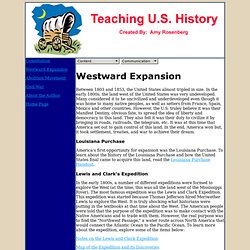 In the early 1800s, the land west of the United States was very undeveloped. Many considered it to be uncivilized and underdeveloped even though it was home to many native peoples, as well as setters from France, Spain, Mexico and other countries. However, the U.S. truley believe it was their Manifest Destiny, obvious fate, to spread the idea of liberty and democracy to this land. They also felt it was their duty to civilize it by bringing in roads, railroads, the telegram, etc. It was at this time that America set out to gain control of this land. 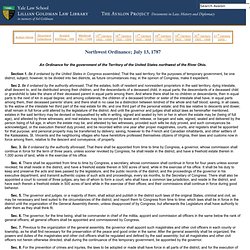 Section 1. Be it ordained by the United States in Congress assembled, That the said territory, for the purposes of temporary government, be one district, subject, however, to be divided into two districts, as future circumstances may, in the opinion of Congress, make it expedient. Sec 2. Sec. 3. Sec. 4. LIBERTY! . Northwest Ordinance. The Northwest Ordinance established a means and precedence by which the United States could expand westward. 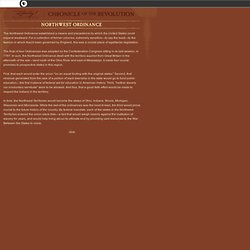 For a collection of former colonies, extremely sensitive—to say the least—to the fashion in which they'd been governed by England, this was a crucial piece of egaliterian legislation. The Northwest Ordinance of 1787 Explained in 3 Minutes: US History Review. Louisiana Purchase, 1803 - 1801–1829 - Milestones - Office of the Historian. The U.S.-Mexican War . Prelude to War . Expansionism and Imperialism. Expansionism and Imperialism By Thomas Hietala The United States experienced its most rapid territorial growth during the mid-1840s. 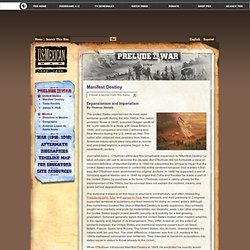 The nation annexed Texas in 1845, acquired Oregon south of 49° north latitude in a treaty with Great Britain in 1846, and conquered and held California and New Mexico during the U.S. -Mexican War. History. Congress enacts the Northwest Ordinance — History.com This Day in History — 7/13/1787. American History USA. Map of the Northwest Territory, including a depiction of the Township system In its brief existence, the Confederation Congress passed little legislation of lasting import. 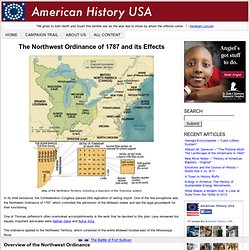 One of the few exceptions was the Northwest Ordinance of 1787, which controlled the admission of the Midwest states and laid the legal groundwork for their functioning. One of Thomas Jefferson's often overlooked accomplishments is the work that he devoted to this plan. Less renowned but equally important advocates were Nathan Dane and Rufus King.

Westward Expansion: The Louisiana Purchase. One of the first colored illustrations to be put into print, John H.B. Latrobe's The Balise. Mississippi River captures the haunting image of a navigation station under a full moon at the mouth of the Mississippi River. Jefferson's plans for the nation depended upon western expansion and access to international markets for American farm products. The Louisiana Purchase Video - Shmoop. Louisiana Purchase - Facts & Summary. War of 1812 - Facts & Summary. War of 1812–1815 - 1801–1829 - Milestones - Office of the Historian. War of 1812–1815 As an important neutral trading nation, the United States became ensnarled in the European conflict that pitted Napoleonic France against Great Britain and her continental allies.

Canal History - New York State Canals. The New York State Canal System is not only rich in history, but also culture. Many immigrants worked long and hard on "Clinton’s Ditch" to create this magnificent waterway. The U.S.-Mexican War . Prelude to War . Manifest Destiny: An Introduction. An Introduction No nation ever existed without some sense of national destiny or purpose. Manifest Destiny – a phrase used by leaders and politicians in the 1840s to explain continental expansion by the United States – revitalized a sense of "mission" or national destiny for Americans. Antebellum Era. Industrial Revolution - Facts & Summary.

But it is a war worth remembering—a struggle that threatened the existence of Canada, then divided the United States so deeply that the nation almost broke apart. Some of its battles and heroes became legendary, yet its blunders and cowards were just as prominent. The film shows how the glories of war became enshrined in history – how failures are quickly forgotten – how inconvenient truths are ignored forever. Building the Erie Canal. Teachers, please read the following before creating accounts for your students: PBS LearningMedia permits teachers to create accounts for their students so that they can access educational content. Louisiana Voodoo.