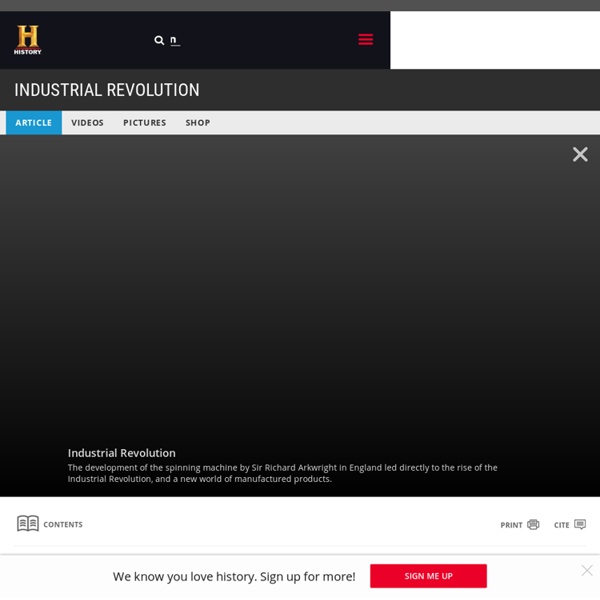 The textile industry, in particular, was transformed by industrialization. Before mechanization and factories, textiles were made mainly in people’s homes (giving rise to the term cottage industry), with merchants often providing the raw materials and basic equipment, and then picking up the finished product. Workers set their own schedules under this system, which proved difficult for merchants to regulate and resulted in numerous inefficiencies. In the 1700s, a series of innovations led to ever-increasing productivity, while requiring less human energy. For example, around 1764, Englishman James Hargreaves (1722-1778) invented the spinning jenny (“jenny” was an early abbreviation of the word “engine”), a machine that enabled an individual to produce multiple spools of threads simultaneously. By the time of Hargreaves’ death, there were over 20,000 spinning jennys in use across Britain. Developments in the iron industry also played a central role in the Industrial Revolution.

Conditions in the Early 1800's - Victorian Crime and Punishment from E2BN Conditions in the Early 1800's Housing in Bedford With the Industrial revolution at its height, new industries and technologies were transforming everyday life. Images from history: Rarely-seen photographs bring 1800s London back to life By Eddie Wrenn for MailOnline Updated: 10:00 EST, 11 August 2009 In the frantic pace of modern life, it is easy to forget our past, and the toils of the generations before us who built the world we live in. But for those familiar with our capital city, these fascinating pictures taken when photography was in its infancy will bring back to life a London which has changed so much over the last 150 years. They capture sweaty, mustachioed long-dead engineers working hard to bring the world's first Underground network to life; they capture the hippo who entertained Londoners and visitors alike during his 30 years' lodgings at Regent's Park; they capture long-past shops and factories; they even capture the construction of one of England's most famous monuments, Nelson's Column, back in 1844.

Industrial Revolution: Glossary and Terms for Kids History >> Industrial Revolution Breaker boy - A worker in a coal mine whose job was to break up the coal into similar size pieces and to remove any impurities from the coal. Many of these workers were young boys between the ages of 9 and 12. Bessemer process - A process that enabled the mass-production of inexpensive steel.

19th Century justice - Victorian Crime and Punishment Catching the Criminal The Victorian period saw great changes in how people were caught, arrested and charged to appear in court. The police force, as we know it today, did not exist until 1856. Before then, most places had only an unpaid parish constable to keep order. ... Witnesses, Lawyers and Juries

Punishment 1750-1900 What was the purpose of the punishments used in the period 1750-1900? During the period covered by this Gallery there were serious debates about the purposes of punishment. Many new ideas were tried in answer to the old problem of what to do with those who break the law. Gradually, through this period, the older "shaming" punishments like the stocks and the pillory fell out of use.

Australia's migration history timeline Black-eyed Sue and Sweet Poll of Plymouth taking leave of their lovers who are going to Botany Bay, Robert Sayer, 1792. Courtesy National Library of Australia By the 1790s British Investors were purchasing 38,000 slaves a year. Over sixty percent of the world’s slave trade was transported in British ships. untitled On a late January night in 1812, a mob hell-bent on violence stormed through the door of George Ball’s textile workshop on the outskirts of Nottingham, England. With handkerchiefs tied around their faces, the men slammed their targets with sledgehammers and fled, leaving behind five shattered knitting machines. The early 1800s was a time of economic upheaval for English hosiers, croppers and weavers. The decade-old Napoleonic Wars had halted trade and caused food shortages. And a change in men’s fashion from stockings to trousers had crippled England’s hosiery industry.

Sydney Living Museums Skip to main content Mobile Menu Search form Hyde Park Barracks 1770s In this decade, Indigenous peoples had rich and complex lifestyles revolving around the land and based on hunting and gathering food and water. They crafted a range of technologies such as shelters, tools, baskets, weapons and vessels for obtaining and carrying food and water. Groups traded with each other for important metals, clays and foodstuffs not available in their own countries. Each group passed their culture, language and beliefs from one generation to the next.

European voyages to the Australian continent HTML version European voyages to the Australian continent explores Australia through four themes: trade, navigation, science and empire. Learn more about the voyages and how the objects carried by different voyagers were made, used or conserved. Explore the Flash interactives Launch the Banks’ Florilegium Flash interactive (Flash 9 compatible – download Flash)

1780s When the War of American Independence (1775–83) ended, Great Britain lost its American colonies and was deprived of a place to dispose of its convicts. During the war, Great Britain could not transport convicts and their numbers had increased significantly. The convicts were jailed in the hulks of old dilapidated warships moored in Plymouth and on the Thames estuary.

My Place for teachers During the first decade of the 19th century, a struggle for power and authority took place between Governors Philip King (1758–1808) and William Bligh (1754–1817) and the New South Wales Corps, which had been sent to maintain order in the colony. This struggle culminated in a military coup against Governor Bligh in 1808 that is sometimes referred to as the 'Rum Rebellion'. Previously, the authority of the governor had also been challenged during the Second Battle of Vinegar Hill. On 4 March 1804, an uprising took place when mainly Irish convicts who were working at the Government Farm seized arms and planned to march on Sydney.

Australia's migration history timeline Map from the 15th century depicting Ptolemy’s description of the known world, 1482 engraving by Johannes Schnitzer. Courtesy Wikimedia For at least 40,000 years Aboriginal people lived isolated in Australia. About 1000 years ago people from China, India, Arabia, Malaya and the Pacific Islands started to explore the oceans around them. It is most likely that these sailors visited the north coast of Australia and traded with Aboriginal people.