“As above, so below, as within, so without, as the universe, so the soul…” 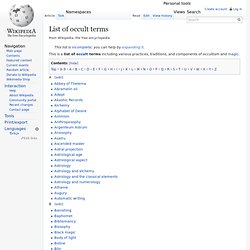 Chaos magic. The chaosphere is a popular symbol of chaos magic. 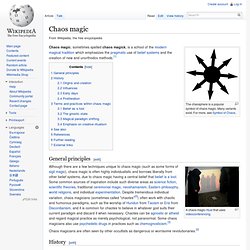 Many variants exist. For more, see Symbol of Chaos. General principles[edit] Chaos magicians are often seen by other occultists as dangerous or worrisome revolutionaries.[2] History[edit] Origins and creation[edit] This magical discipline was first formulated in West Yorkshire, England in the 1970s.[4] A meeting between Peter J. Influences[edit] Following Spare's death, magicians continued to experiment outside of traditional magical orders. Early days[edit] The first edition of Liber Null does not include the term "chaos magic", but only refers to magic or "the magic art" in general.[6] Texts from this period consistently claim to state principles universal to magic, as opposed to a new specific style or tradition of magic, and describe their innovations as efforts to rid magic of superstitious and religious ideas. Chaos came to be part of this movement defined as "the 'thing' responsible for the origin and continued action of events[...].

Www.zeitgeistmovie.com/Zeitgeist, The Movie- Companion Guide PDF.pdf. Zeitgeist: The Movie - by Peter Joseph ( Full Film ) Masonic Network. In my journey through the world of the Freemasons, I have identified three different types of Master Masons, which are as follows: These are the Masons who loyally pay their test fees but are never seen in the Lodge. 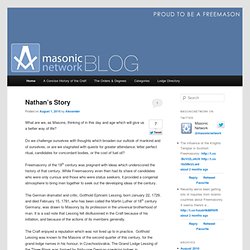 They are either unable to attending (perhaps living too far away or whose interest has waned), or they joined for the Order in the hopes that it might help their public or private avocations. Lodge Secretaries are familiar with the Brother’s name, but cannot place a face to it. This Mason may occasionally make an appearance in the Lodge, send in a donation for a worthy Masonic cause, or read a book or article pertaining to the fraternity.

They truly like being a Mason but fail to make a major commitment to it, such as becoming an officer bearer or serving on a committee. Most do not progress beyond the Blue degrees decrying the appendant orders as not true Masonry and they are the first to complain when the test fees are increased or if the Lodge doesn’t look quite right. 1. Everything Curious From Aquiziam. GonikaLife - home. Alternative Thinking 37. “Science progresses funeral by funeral” -Max Planck That is a quote by a voice from the PAST. 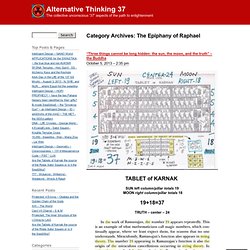 However this video demonstrating leading edge technology called PAPILLION being developed by Disney is in the PRESENT. What will the FUTURE bring after the current batch of science experts reach their best before date? The video is hinting at the FUTURE of where optics is headed. Optics and light and perhaps Penrose tilings placed on a curved surface are also well within the domain of what Roger Penrose might use in trying to explain quantum non-locality!

Twistors and quantum non-locality is a topic Roger and ME explore using the evidence called coincidences, much later in this blog. (IMHO this particular animation of PAPILLION looks like a stubby little penis – doesn’t it?) PAPILLION addresses what pi is and it also illustrates how to join the dots between a flat surface and a curved display. As a side note what is the connection between PAPILLION and the GALACTIC BUTTERFLY? UPDATE Jan. 25, 2014 2 vs 3. Esoteric reality. Higher Consciousness. Akashic Records. The Belly of the Beast: A short play on divinity and consciousness. Do what thou wilt shall be the whole of the Law. 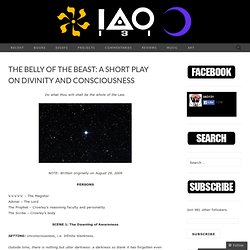 NOTE: Written originally on August 29, 2009 V.V.V.V.V. – The Magister Adonai – The Lord The Prophet – Crowley’s reasoning faculty and personality The Scribe – Crowley’s body SCENE 1: The Dawning of Awareness SETTING: Unconsciousness, i.e. Infinite blankness. Outside time, there is nothing but utter darkness: a darkness so blank it has forgotten even its contrast with light. MAGISTER: Infinity is so… impersonal. Out of formlessness, space and time emerged… SCENE 2: Coming to Self-understanding SETTING: Aleister Crowley’s consciousness Matter expanded and evolved into various forms. MIND: I have conquered a hundred slopes, beaten a thousand chess competitors, written endless words of poetry and prose… but lo! ADONAI: Greeting(s) of earth and heaven! The scribe drops his pen. SCENE 3: Returning to the world SETTING: Aleister Crowley’s superconsciousness MAGISTER: Back where we started again!