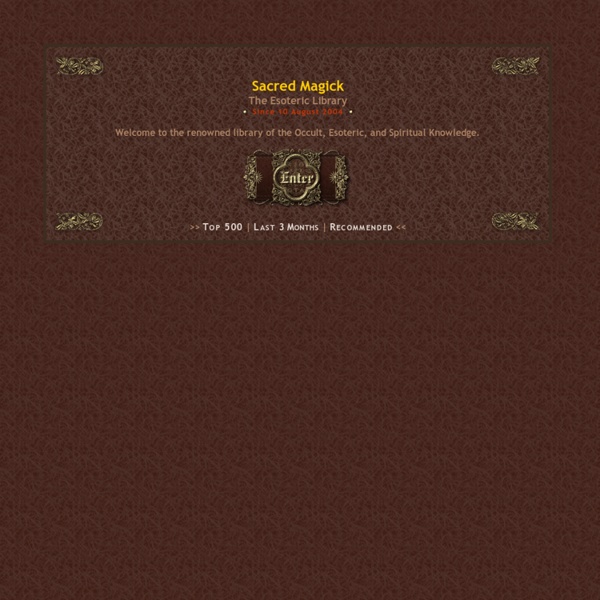 Gnostic Society Library: Sources on Gnosticism and Gnosis Almost all of the several dozen internet sites with collections of texts similar to our own obtained their material by directly or indirectly copying some files present at the Gnosis Archive. Ours was perhaps the first major collection of such texts to appear on "the web" in 1994, and thus has served as a source for others creating "their own" collections. Unfortunately transcription errors, typos, and primitive HTML formatting were present in the massive amount of material added to the Gnosis Archive in our first years; in a repeated process of "copying" they have been very widely propagated around the internet. Over nearly two decades we have made many corrections to these texts. It appears that few of the sites copying material from this collection have taken the time to read, edit and correct the texts!

KAR 44 - An Assyrian Magician's Manual Reshe Ishkari MashmashutiThe Titles of the Works of Magic This text has been called "a magician's vade mecum," a handbook of the trade. It outlines what a magician, or ashipu, of the 8th century b.c.e. was supposed to know, or have on hand for reference. Reshe Ishkari Mashmashuti lists books, rituals and other techniques of the ashipu's profession. Archeologists and scholars have recovered a large part of this material, and I have tried to put most of it on this site. Masonic E-Book Library Note: Many of the e-books in this library are several hundred pages long and include illustrations. It takes a minimum of a high-speed DSL or cable modem to download many of them. i.e. Mackey's Masonry Defined takes 3 minutes just to download the text. A Message from our Librarian Max Heindel - Rosicrucian Mysteries_An Elementary Exposition of their Secret Teachings Bibliography of the Writings and Works of Albert Pike

How To Become a Lucid Dreamer Gloria Eagle, Waking Times Lucid dreams are the dreams in which you are conscious that you are dreaming. Such dreams are usually very clear and give a great sense of freedom. Although we all get a few lucid dreams in a life time, one can cultivate the ability to lucid dream and become a lucid dreamer on a regular basis. Dreams, and the ancient Art of Dreaming is a Royal road to self knowledge. Pyramid Texts Online - Library Come in and make yourself comfortable. Select a book from the list below to load into the reading window. If you need help call Bennu by clicking on the cartouche of Unas at the top of the page. V-Library - Veritas The V-Library (Veritas Library) is an online collection of e-books by various authorities in the field of metaphysics and the occult. All the e-books are free for use and are public domain resources. "The idea for this came to me when seeing the Bob Hendricks Memorial CM Library on OccultForums and after seeing the Sacred Magick website fall victim to bandwidth strangulation. I figured veritas could use a Library for each of its varied subjects. A post will be made in Psionics, Body Energy Arts, Magick and Spirituality after I find enough files to make a decent post.

Rare Metaphysical Books - The VOICE OF ISIS pages 1-13 'The Path' and pages 14-19 'Meaning of the Symbol' Voice of Isis - by the Order of Christian Mystics - 1926 Voice of ISIS: CHAPTER XXXIV. The Meaning of the Symbol The Seal consists of a double triangle inscribed in a circle, with an open Eye in the center and three five pointed stars in the spaces between the sides of the triangle and the circle. The circle represents Boundless Space and limitless Time in Eternity. It marks off the space in which creation takes place, or the circle formed by the downpouring of the Great Creative Force, in this case the circumference within which this Order is working.

Everyday Evidence for the Law of Attraction (15 Examples) By Andrea Schulman If you are learning how to consciously create your reality with the Law of Attraction it is very important that you believe in the universe’s ability to deliver your dreams. You will only attract what you believe in. Many of us, however, have an “I’ll believe it when I see it” attitude, and we want evidence that this law works before we choose to really believe in it. Downloadable Books Catalogs (More than 1500 pdf books)... These catalogs give me the opportunity to present collections or groups of related books in a more detailed and sympathetic context than the normal website allows, and will also enable me to give people first choice at some of the more interesting new arrivals. As usual I have a variety of other catalogs in preparation. Future catalogs will be devoted to Hermetica, Witchcraft, Astrology, Kabbalah, Grimoires, Theosophy and also Aleister Crowley, H.P.Blavatsky, George Robert Stowe Mead, Gerald Gardner, Henry Cornelius Agrippa, Hermes Trismegistus, Eliphas Levi, Austin Osman Spare, Ea Wallis Budge, Arthur Edward Waite, Leonardo Da Vinci, Louis Claude De Saint Martin. All of the materials here are presented in Adobe Acrobat PDF format, as it is accessible to users of most computer platforms. The Adobe Acrobat Reader also allows one to view the graphics in high resolution, and to print them out on laser printers with high quality.

Fragments of Empedokles Fragments and Commentary The First Philosophers of Greece(London: K. Paul, Trench, Trubner, 1898) Arthur Fairbankseditor and translator Liber AL vel Legis Liber ALvelLegis sub figurâ CCXX as delivered byXCIII = 418toDCLXVI A∴A∴ Publication in Class A Introduction IThe Book 2 Common Law of Attraction Myths By nature, the Law of Attraction is very simple: what you think about and feel about you will bring about. However, just because the Law of Attraction is simple, doesn’t mean that everybody has the correct assumptions about it. Some of the common beliefs that we have about the Law of Attraction lead us to misuse it, and this can keep us from manifesting our realities the way that we really want to.

Free eBooks from Viewzone Viewzone recently acquired much larger bandwidth, thanks to donations from our readers. We have used this to offer many new features including this new FREE eBook section. If you have an eBook you would like to share, please contact us. THE SILENT BURNING a book by Ryan Bartek This is the debut anthology of USA writer, journalist & musician Ryan Bartek.