A megalopolis six times the size of New York, JingJinJi will ease the pressures being faced by China’s capital Beijing. 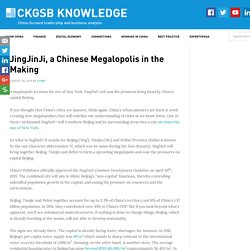 If you thought that China’s cities are massive, think again. China’s urban planners are hard at work creating new megalopolises that will redefine our understanding of cities as we know them. One of them—nicknamed JingJinJi—will transform Beijing and its surrounding areas into a city six times the size of New York. So what is JingJinJi? It stands for Beijing (‘Jing’), Tianjin (‘Jin’) and Heibei Province (Hebei is known by the one character abbreviation ‘Ji’, which was its name during the Han dynasty).

China’s Politburo officially approved the JingJinJi Common Development Guideline on April 30th, 2015. Beijing, Tianjin and Hebei together account for up to 2.3% of China’s territory and 8% of China’s 1.37 billion population. The signs are already there. Poor quality of life due to such inconveniences have forced many to leave the capital. Maven Tutorial for Beginners : with Eclipse. Untitled. Eigenvectors and Eigenvalues explained visually. Loading [MathJax]/jax/output/HTML-CSS/jax.js Explained Visually By Victor Powell and Lewis Lehe Eigenvalues/vectors are instrumental to understanding electrical circuits, mechanical systems, ecology and even Google's PageRank algorithm. 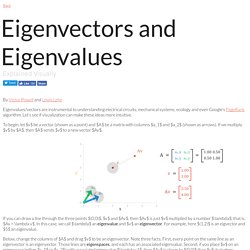 Let's see if visualization can make these ideas more intuitive. To begin, let v be a vector (shown as a point) and A be a matrix with columns a1 and a2 (shown as arrows). If you can draw a line through the three points (0,0), v and Av, then Av is just v multiplied by a number λ; that is, Av=λv. Dive Into NLTK, Part IV: Stemming and Lemmatization – Text Mining Online. This is the fourth article in the series “Dive Into NLTK“, here is an index of all the articles in the series that have been published to date: Part I: Getting Started with NLTKPart II: Sentence Tokenize and Word TokenizePart III: Part-Of-Speech Tagging and POS TaggerPart IV: Stemming and Lemmatization (this article)Part V: Using Stanford Text Analysis Tools in PythonPart VI: Add Stanford Word Segmenter Interface for Python NLTKPart VII: A Preliminary Study on Text ClassificationPart VIII: Using External Maximum Entropy Modeling Libraries for Text Classification Stemming and Lemmatization are the basic text processing methods for English text. 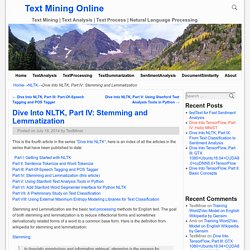 The goal of both stemming and lemmatization is to reduce inflectional forms and sometimes derivationally related forms of a word to a common base form. Here is the definition from wikipedia for stemming and lemmatization: Stemming: Speech recognition - Hello world for spoken NLP interaction (like Siri)? CMUSphinx Tutorial For Developers [CMUSphinx Wiki] The Project Gutenberg EBook of The Adventures of Sherlock Holmes by Sir Arthur Conan Doyle (#15 in our series by Sir Arthur Conan Doyle) Copyright laws are changing all over the world. Be sure to check the copyright laws for your country before downloading or redistributing this or any other Project Gutenberg eBook. This header should be the first thing seen when viewing this Project Gutenberg file. Please do not remove it. Do not change or edit the header without written permission. 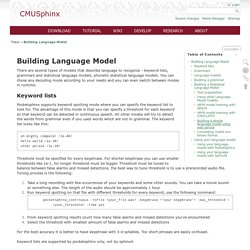 You can chose any decoding mode according to your needs and you can even switch between modes in runtime. Keyword lists Pocketsphinx supports keyword spotting mode where you can specify the keyword list to look for. The advantage of this mode is that you can specify a threshold for each keyword so that keyword can be detected in continuous speech. All other modes will try to detect the words from grammar even if you used words which are not in grammar. GitHub - attardi/wikiextractor: A tool for extracting plain text from Wikipedia dumps. Carinh’s Documents on SlideShare. Buy Authentic Louis Vuitton Handbags from Factory Outlet. Using colours in LaTeX. There are several elements in LaTeX whose colour can be changed to improve the appearance of the document. 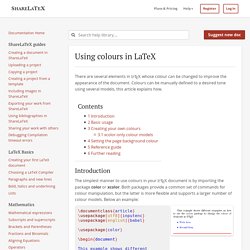 Colours can be manually defined to a desired tone using several models, this article explains how. [edit] Introduction The simplest manner to use colours in your LaTeX document is by importing the package color or xcolor. Both packages provide a common set of commands for colour manipulation, but the latter is more flexible and supports a larger number of colour models. Coursera - Free Online Courses From Top Universities. Word Search II. Given a 2D board and a list of words from the dictionary, find all words in the board. 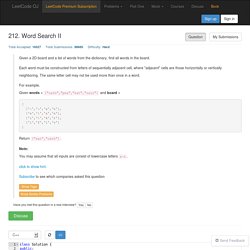 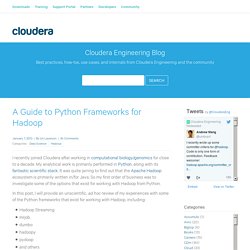 My analytical work is primarily performed in Python, along with its fantastic scientific stack. It was quite jarring to find out that the Apache Hadoop ecosystem is primarily written in/for Java. So my first order of business was to investigate some of the options that exist for working with Hadoop from Python. In this post, I will provide an unscientific, ad hoc review of my experiences with some of the Python frameworks that exist for working with Hadoop, including: Machine Learning vs. Natural Language Processing, part 1 - Lexalytics. (Note: Updated July 2, 2015) What is Machine Learning? 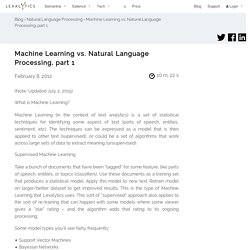 Machine Learning (in the context of text analytics) is a set of statistical techniques for identifying some aspect of text (parts of speech, entities, sentiment, etc). The techniques can be expressed as a model that is then applied to other text (supervised), or could be a set of algorithms that work across large sets of data to extract meaning (unsupervised). Supervised Machine Learning Take a bunch of documents that have been “tagged” for some feature, like parts of speech, entities, or topics (classifiers). Some model types you’ll see fairly frequently. A Guide to Python Frameworks for Hadoop. Writing An Hadoop MapReduce Program In Python. In this tutorial I will describe how to write a simple MapReduce program for Hadoop in the Python programming language. 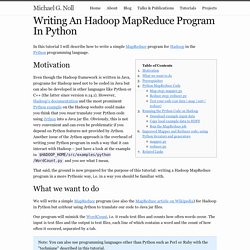 Even though the Hadoop framework is written in Java, programs for Hadoop need not to be coded in Java but can also be developed in other languages like Python or C++ (the latter since version 0.14.1). However, Hadoop’s documentation and the most prominent Python example on the Hadoop website could make you think that you must translate your Python code using Jython into a Java jar file. Creating a great data science resume. I hear a familiar story from a lot of aspiring data scientists: “I have sent out my resume to 25 companies, and I haven’t heard back from any of them! 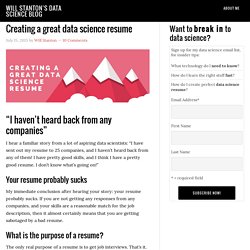 I have pretty good skills, and I think I have a pretty good resume. I don’t know what’s going on!” Your resume probably sucks My immediate conclusion after hearing your story: your resume probably sucks. If you are not getting any responses from any companies, and your skills are a reasonable match for the job description, then it almost certainly means that you are getting sabotaged by a bad resume. LaTeX Templates. TikZ and PGF. Webmail: Max-Planck-Institut für Informatik - You must be logged in to access this page. 海外申请护照在线预约. 海外申请护照在线预约. Practical Programming for Total Beginners. Automate the Boring Stuff with Python Programming. If you're an office worker, student, administrator, or just want to become more productive with your computer, programming will allow you write code that can automate tedious tasks.

This course follows the popular (and free!) Book, Automate the Boring Stuff with Python. Automate the Boring Stuff with Python was written for people who want to get up to speed writing small programs that do practical tasks as soon as possible. You don't need to know sorting algorithms or object-oriented programming, so this course skips all the computer science and concentrates on writing code that gets stuff done. Improve Your Python: Python Classes and Object Oriented Programming.

The class is a fundamental building block in Python. It is the underpinning for not only many popular programs and libraries, but the Python standard library as well. Understanding what classes are, when to use them, and how the can be useful is essential, and the goal of this article. In the process, we'll explore what the term Object-Oriented Programming means and how it ties together with Python classes. Everything Is An Object... 40 Terminal Tips and Tricks You Never Thought You Needed.

The Terminal is an exceptionally powerful tool, providing a command line interface to the underpinnings of OS X. It’s a topic we’ve covered at length before with our popular series Taming the Terminal. There’s a great deal that Terminal can do, from moving large numbers of files to changing preferences that we didn’t even know exist. To demonstrate just how versatile the Terminal is, I’ve rounded up 40 truly excellent Terminal tips and tricks that can come in very handy. All of the Terminal commands I’ll be showing you are perfectly safe to use and, when it comes to changing preferences, are completely reversible.

Gensim: Tutorials. The tutorials are organized as a series of examples that highlight various features of gensim. It is assumed that the reader is familiar with the Python language, has installed gensim and read the introduction. Semantic role labeling part 1 naacl 2013 tutorial. Sentiment Tutorial Demo: Word-vector similarity. Profile of Mood States (POMS) POMS is a standard validated psychological test formulated by McNair et al. (1971)[1]. The questionnaire contains 65 words/statements that describe feelings people have. The test requires you to indicate for each word or statement how you have been feeling in the past week including today. Required Resources. Gensim: Topic modelling for humans. Practnlptools 1.0.

Practical Natural Language Processing Tools for Humans. Dependency Parsing, Syntactic Constituent Parsing, Semantic Role Labeling, Named Entity Recognisation, Shallow chunking, Part of Speech Tagging, all in Python. District Data Labs - Modern Methods for Sentiment Analysis. Sentiment Symposium Tutorial: Vector-space models. Collaborative Filtering : Implementation with Python! - Artificial Intelligence in Motion. Continuing the recommendation engines articles series, in this article i'm going to present an implementation of the collaborative filtering algorithm (CF), that filters information for a user based on a collection of user profiles. Users having similar profiles may share similar interests. For a user, information can be filtered in/out regarding to the behaviors of his or her similar users. Airfare tips: cutting the price of travel in half. In the past year I have flown 20 times: from North America to Europe, the Middle-East and North Africa, to Asia and back.

We recommend upgrading to the latest Safari, Google Chrome, or Firefox. Finding the natural number of topics for Latent Dirichlet Allocation - Christopher Grainger. Update (July 13, 2014): I’ve been informed that I should be looking at hierarchical topic models (see Blei’s papers here and here). Thanks to Reddit users /u/GratefulTony and /u/EdwardRaff for bringing this to my attention. What is a good way to perform topic modeling on short text? Writing An Hadoop MapReduce Program In Python. Python Map Reduce on Hadoop - A Beginners Tutorial.