Recommended Android Apps - Samsung Galaxy Tab S 10.5. 25 fun things to do with a Raspberry Pi. Raspberry Pi, the bargain micro PC released earlier this year, has fertilised the imaginations of the public, bringing with it a boom in inventive approaches to computing not seen since the good old days of 8-bit. 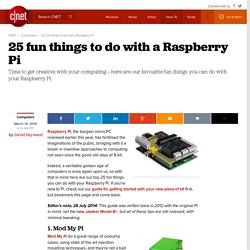 Indeed, a veritable golden age of computers is once again upon us, so with that in mind here are our top 25 fun things you can do with your Raspberry Pi. If you're new to Pi, check out our guide for getting started with your new piece of kit first, but bookmark this page and come back. Editor's note, 28 July 2014: This guide was written back in 2012 with the original Pi in mind, not the new, sleeker Model B+, but all of these tips are still relevant, with minimal tweaking. 1. 10 weird and wonderful Raspberry Pi hacks.

Necessity may be the mother of invention, but having a $35 Raspberry Pi computer helps too. 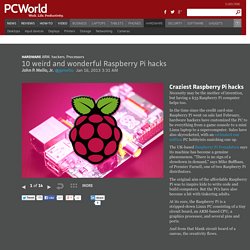 In the time since the credit card-size Raspberry Pi went on sale last February, hardware hackers have customized the PC to be everything from a game console to a mini Linux laptop to a supercomputer. Sales have also skyrocketed, with an estimated one million PC hobbyists snatching one up. Raspberry Pi Rising: 7 Incredible Projects People Are Making With The Single Board Computer [VIDEO]

In less than a year on the market (and just one month in the U.S.), the U.K.'s Raspberry Pi Foundation has sold more than 1 million units of its affordable credit card-size computer, the Raspberry Pi. 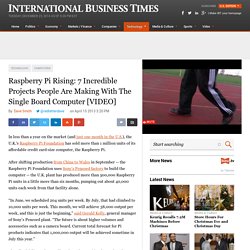 After shifting production from China to Wales in September -- the Raspberry Pi Foundation uses Sony’s Pencoed factory to build the computer -- the U.K. plant has produced more than 500,000 Raspberry Pi units in a little more than six months, pumping out about 40,000 units each week from that facility alone. “In June, we scheduled 204 units per week.

By July, that had climbed to 10,000 units per week. 12 Cool Projects For Your Raspberry Pi. Raspberry Pi, the affordable, credit-card sized computer, has inspired tinkerers everywhere. 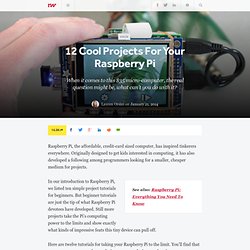 10 More Mind-Blowing, Skill-Building Raspberry Pi Projects. Raspberry Pi, the credit-card sized, $35 Linux computer, has been on the market for under a year, but excited hackers are using the platform for dozens of new, cool projects and accessory products every month. 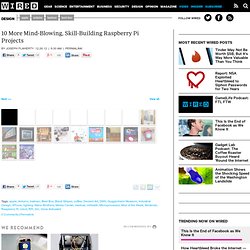 Since our last Raspberry Pi roundup we've found 10 more amazing projects that show how versatile this diminutive PCB is. From voice-activated coffeemakers to wall-hanging plotters, the Raspberry Pi is proving to be a fruitful addition to the maker's toolbox. Arduino UNO Tutorial 7 - Piezo Beep. Arduino UNO Tutorial 7 - Piezo Beep In this easy Arduino UNO tutorial, we are going to use a simple Piezo Transducer to create some beeps. 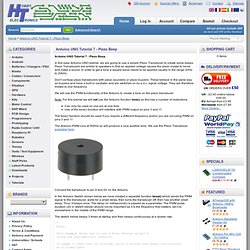 Piezo Transducers are similar to speakers in that an applied voltage causes the piezo crystal to move and make a sound. In order to get a tone a square wave needs to be applied usually in the range 20Hz to 20kHz. Don't confuse piezo transducers with piezo sounders or piezo buzzers. These behave in the same way as buzzers and have a built in oscillator and are switched on by a d.c. signal voltage. Documentation - Raspberry Pi to Arduino shields connection bridge. Article Index Go to Index1. 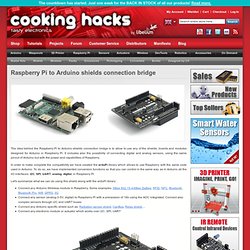 The Shield. 8 Digital pins.Socket for wireless modules.RX/TX pins.i2C pins (SDA, SCL).SPI pins (SCK, MISO, MOSI, CS). Can be used also as GPIO.8 channel analog to digital converter.Switch to enable external power supply. Get the schematics here. So you got a Raspberry Pi: now what?

Adafruit's Raspberry Pi Lesson 4. GPIO Setup. The diagram below show the pins on the GPIO connector for a Raspberry Pi Version 1 (which is what existed when this tutorial was released) Version 2 has pin 27 replacing pin 21 but it otherwise the same As well as supplying power (GND, 3.3V and 5V) all the GPIO pins can be used as either digital inputs or outputs. 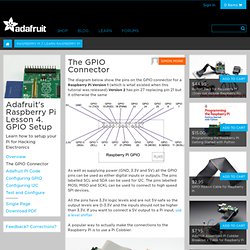 The pins labelled SCL and SDA can be used for I2C. The pins labelled MOSI, MISO and SCKL can be used to connect to high speed SPI devices. All the pins have 3.3V logic levels and are not 5V-safe so the output levels are 0-3.3V and the inputs should not be higher than 3.3V. How to Code Raspberry Pi to Tweet it's own Temperature - AW. In this post we will be building up on the code that we had developed in the previous post on Tweepy. 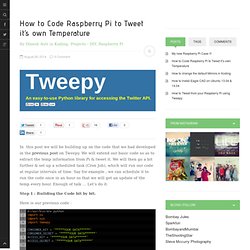 We will extend our basic code so as to extract the temp information from Pi & tweet it. We will then go a bit further & set up a scheduled task (Cron Job), which will run our code at regular intervals of time. Say for example , we can schedule it to run the code once in an hour so that we will get an update of the temp every hour. Enough of talk … Let’s do it. Step 1 : Building the Code bit by bit. RPI- Sensors. Learn RPi.

The life of Pi - clever ideas with a tiny computer. 21 March 2013Last updated at 10:05 ET While the Chancellor was delivering his budget yesterday, I was in a room near Cambridge full of young people who may be part of the answer to Britain's economic future. 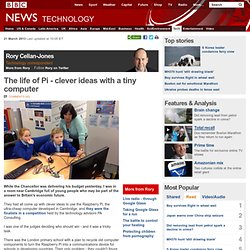 They had all come up with clever ideas to use the Raspberry Pi, the ultra-cheap computer developed in Cambridge, and they were the finalists in a competition held by the technology advisors PA Consulting. I was one of the judges deciding who should win - and it was a tricky task. [ARDUINO + RASPBERRY PI] Switching light with NRF24l01+ [Raspberry Pi – Arduino ]Lamp Switch[/caption] A month ago we planned to manage our Arduino irrigator (aka Irrigatorino) through the NRF24l01+ wireless module. Our little project has been subjected to a little change, since we decided to make our life easier (buahahah…) and remote control a light over a browser (yes, mobile too). Surprisingly, a lot of people liked the little demo I’ve made with some raw code and asked for a tutorial, so here we are: Ladies and (more probably) Gentleman, I’m glad to present you the lamp driven by a browser switch!

Nothing new actually, but still exciting! To test the wiring we suggest you to use the ping/pong test you can find in the RF24 libraries (both, of the raspberry and the arduino). An ARM GNU/Linux box for $25. Take a byte! PcDuino, Open Hardware, Arduino. Arduino 5 Minute Tutorials: Lesson 7 - Accelerometers, Gyros, IMUs. Lessons Menu: Lesson 7 Hardware: Computer / Laptop or NetbookArduino MicrocontrollerUSB to Serial Adapter (if your microcontroller does not have a USB port)Appropriate USB cable (Arduino boards draw power from the USB port – no batteries yet) Analog accelerometer, gyroscope and/or IMUConnectors (between the IMU and the Arduino Accelerometers, gyroscopes and IMUs are incredibly useful little sensors which are being integrated more and more into the electronics devices around us.

These sensors are used in cell phones, gaming consoles such as the Wii wireless remote control, toys, self-balancing robots, motion capture suits and more. 20 Unbelievable Arduino Projects. Python Multithreaded Programming. Running several threads is similar to running several different programs concurrently, but with the following benefits − Multiple threads within a process share the same data space with the main thread and can therefore share information or communicate with each other more easily than if they were separate processes.Threads sometimes called light-weight processes and they do not require much memory overhead; they care cheaper than processes.

A thread has a beginning, an execution sequence, and a conclusion. It has an instruction pointer that keeps track of where within its context it is currently running. It can be pre-empted (interrupted)It can temporarily be put on hold (also known as sleeping) while other threads are running - this is called yielding. Starting a New Thread. RPi Beginners. Back to the Hub Getting Started: A Gentle Introduction to Programming Using Python.

Learn RPi. Raspberry Pi add-on board controls entire buildings ·  LinuxGizmos.com. UniPi is seeking Indiegogo funding for a Raspberry Pi add-on for building automation with analog and digital I/O, changeover relays, and 1-Wire interfaces. The Raspberry Pi has found its way into many a home automation project, from lighting controls to automatic sprinkler systems, and is often used as a prototype for commercial systems. But is the modest RPi up for managing an entire building? No problem, says Czech startup UniPi, which is offering Indiegogo funding packages of 99 Euros ($133) and 109 Euros ($146) for its UniPi building automation add-on board. Program Raspberry Pi Lesson 4: Display the temperatures in different cities taken from a web service. Adding a Real Clock Calendar to your Raspberry PI. The Raspberry Pi doesn’t have a little coin-battery-powered ‘Real Time Clock’ (RTC) module, which keeps time even when the power is off, or the battery removed.

To keep costs low and the size small, an RTC is not included with the Raspberry Pi. If your Raspberry Pi is connected to the Internet via Ethernet or WiFi, the time/date will be automatically updated from the global ntp (nework time protocol) servers. For stand-alone projects with no network connection, you will not be able to keep the time when the power goes out. In this project we will show you how to add a RTC Click shield from Mikroelektronika, without the use of iron solder or breadboard. Install SickRage Raspberry Pi for Usenet Torrent TV. SickRage is an evolved fork of SickBeard the classic automated TV downloader. SickRage can send tv shows to your usenet or torrent downloader. Enginursday: Developing on the Edison.

6 Android Apps Every Raspberry Pi Owner Should Use. 16 Raspberry Pi Model A+ Projects: Perfect Uses for the Slimmer, Cheaper Computer. The newest member of the Raspberry Pi family is here, and it's cheaper and thinner than its predecessors—though it's missing a few ports. Raspberry pi Controlling Led over Network.