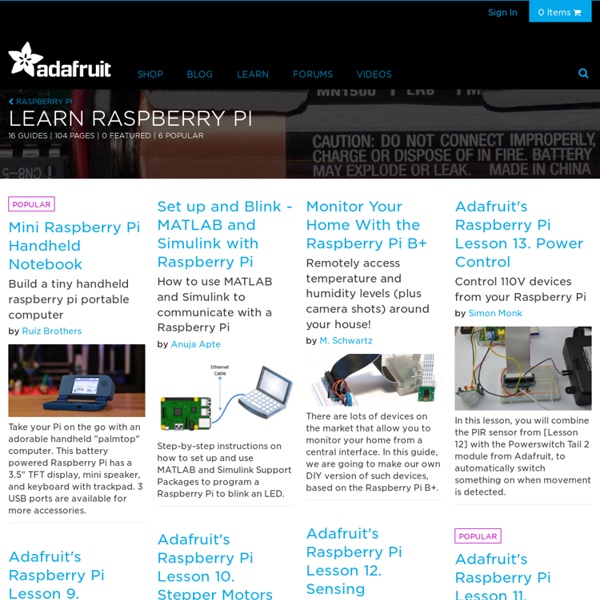 Using an Infrared Library on Arduino IRLib not only receives and decodes IR signals but it can transmit them as well using an IR LED and a driver circuit. The library has been used to control TVs, cable boxes, DVDs, VCRs, and IR controlled toys such as helicopters and dinosaur robots. It could also be used to control some home automation devices. Some users have attempted to control air conditioners and fans however protocols used for air-conditioners are extremely difficult to implement and we have not directly supported such protocols because they are very rare. Typically the output pin of an Arduino cannot supply sufficient current to drive and IR LED so you will want to implement a simple driver circuit using NPN transistor and a 470 ohm resistor is shown here: Make sure that you get the polarity of the LED correct.

PlexiClock First, I hope you will have a lot offun with the following instruction! I also want to thank every author of the instructions which I used to manage this! I apologize for not being word-perfect in English and if you have any question, don’t hesitate to contact me! Before you begin to work, make sure you have all the parts together. You see all of the parts which I used in the first picture and there is a list with all of the parts following. I also included some links where you can purchase the parts and some other tutorials regarding each used circuit board. Move Raspberry Pi Root File System (rootfs) From SD Card To Usb / HDD So it is a well known fact now that SD cards have a limited life with their read/writes. This poses a problem for the raspberry pi as the root file system is all sat on an SD. If you have ever been met with corruption issues or crashes you more than likely end up having to reflash a new image to the SD card which can result in you losing all of your set up. To get around this there have been a number of posts on the forums regarding moving the root folders out of the SD card and purely using a USB flash drive or HDD. There are a few benefits to doing this such as increased access/write speeds, being able to use much smaller SD cards (cheaper) and being able to reduce the chance of corruption of your files. It has to be said not all the files can be moved, I have mentioned root files but the SD card has to keep the boot information.

42 of the Most Useful Raspberry Pi Commands Sometimes it’s hard to keep track of all the Raspberry Pi commands you use, so I created a list of some of the most useful and important ones that will make using Linux on the Raspberry Pi a lot easier. But first a quick note about user privileges… There are two user “modes” you can work with in Linux. One is a user mode with basic access privileges, and the other is a mode with administrator access privileges (AKA super user, or root). Some tasks can’t be performed with basic privileges, so you’ll need to enter them with super user privileges to perform them. how-to make a ‘usb battery’ found out yesterday that there’s a shuffle shortage and gadget battery life can only be expected to get worse. bummer. at least you can make the most of your waiting-for-shuffle blues and solder yourself a ‘usb battery’. this little gizmo runs off a 9 volt battery and supplies your favorite little device with the proper 5 volts of mobile power. in lieu of running an ipod off of it, i tested it with an mpx220 smartphone and it should work fine with any low power mobile device that can charge via usb cable. read more for instructions on how to make your own. here’s what you need to scrounge up: 5.1v zener diode.100ohm or slightly greater resistor. all i had was a 330ohm which works. don’t try anything lower than 100ohm.9v battery connector and 9v battery.flat female usb connector that mates with your device’s usb cable. this is the hardest part to find. i tore mine off an old usb extension cable. wire it up test it

CAGE Web Design How to open your Raspbmc favorites with one keypress? navigate to the folder /home/pi/.xmbc/userdata/keymapsedit a file called keyboard.xml (create one if it doesn’t exist yet!)add the following text to the file:<keymap> <global> <keyboard> <F1>ActivateWindow(Favourites)</F1> </keyboard> </global></keymap>(of course you can replace <F1> by a different key)Reboot the PI:sudo shutdown -r now Now your ‘favorites menu’ will appear anytime you press your <F1>-key! How to use your Android phone as a remote control for your Raspbmc Media Center?

CNC Made From Garbage - All Canadians produces 725 tonnes of e-waste annually. After seeing all of the electronics thrown away at my school, I am not surprised by this statistic. I believe that most thrown away electronics have a lot of hidden use. I wanted to prove this by building a machine entirely out of garbage. After looking at the electronics that I hoarded...ahem...I mean collected, I realised I could build a CNC machine. Get temperature of your Raspberry Pi You Raspberry Pi has some nice commands that comes from its firmware that gets you information about the condition of some hardware components. One of this commands is able to measure and prints out the current temperature of your temperature sensor on your board. This may sounds complicated, but is really simple! vcgencmd 3D Printed Digital Night Vision (The OpenScope) I love light, physics, optics, and electronics. I started designing night vision optics a few years ago when I got into playing airsoft with some buddies. After a couple miserable night games, I was inspired to build something better than a flashlight. Since night vision is typically expensive to buy, I chose to build a digital system and it ended up working out great!

Build a Raspberry Pi-Based Cable Shutter Release for Sony Cameras Replacing a simple and inexpensive remote cable release for your camera with Raspberry Pi may seem like a classic case of over-engineering, but using the tiny machine to control the camera opens up a whole new world of photographic opportunities. Using a simple Python script, you can turn Raspberry Pi into a powerful and flexible intervalometer or trigger the shutter using sensors connected to the computer. Add to Raspberry Pi a Python-based web app, and you can control your camera from any computer or mobile device. As with any DIY electronics project, there is always a risk of damaging your camera, so proceed with caution. If you are not sure what you are doing, don’t proceed at all.

YouTube Subscriber Counter with ESP8266 Follow the official assembly instructions for the Feather Huzzah using female headers (or stacking headers, though you'd have to cut the long legs off) Likewise follow the assembly instructions for your seven-segment FeatherWing display. Before you dive into the code for this project, you should first make sure you've got your Arduino software set up properly to program the board you are using, which in my case involves installing the SiLabs USB driver and installing ESP8266 board support (explained in more detail in the Feather Huzzah tutorial): Go to Arduino-> Preferences...Look for a text field labeled "Additional Boards Manager URLs:" and paste the following URL into the field (separate multiple URLs with commas if applicable): <a href=" OKGo to Tools->Board-> Boards Manager...Search for ESP8266 and click the Install button in the box "esp8266 by ESP8266 Community" when it shows up Plug in your USB cable to the board and configure your settings under the Tools menu as follows:

Pigeon: a 3D Printed Cloud Camera That Uses the New Raspberry Pi Zero W - All After the installation is completed, you will be able to watch the camera live feed by accessing: If you want to setup remote access, make sure to setup port forwarding in your modem admin panel (port 8099 to your Raspberry IP.) If everything went fine, you will start seeing MP4 clips being saved on your Dropbox folder when motion events are triggered. If you want to start at boot, edit the rc.local file as following: sudo nano /etc/rc.local Add the following command below the comment, but leave the line exit 0 at the end, then save the file and exit: Use a DIY Proximity Sensor to Automate Your Haunted House: 6 Steps (with Pictures) In most cases you will use a microcontroller such as an Arduino to monitor the signal from the sensor. To do this, connect the ground terminal from the sensor to the GND pin on the Arduino. Connect the 5V wire from the sensor to either the 5V pin or a digital output pin set to HIGH.