ZHC%20 %20Pathways%20to%20Zero%20Hunger. What is Fairtrade? - Fairtrade Australia and New Zealand. Sustainable Development Goals. Sustainable Development Goals End poverty in all its forms everywhere End hunger, achieve food security and improved nutrition and promote sustainable agriculture Ensure healthy lives and promote well-being for all at all ages. TechnoServe - Business Solutions to Poverty. 10 Things Everyone Should Know About Hunger In Ethiopia.

Ethiopia loses around 16.5 percent of its GDP each year to the long-term effects of child malnutrition. 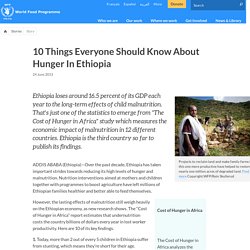 That's just one of the statistics to emerge from "The Cost of Hunger in Africa" study which measures the economic impact of malnutrition in 12 different countries. Ethiopia is the third country so far to publish its findings. ADDIS ABABA (Ethiopia)—Over the past decade, Ethiopia has taken important strides towards reducing its high levels of hunger and malnutrition.

Nutrition interventions aimed at mothers and children together with programmes to boost agriculture have left millions of Ethiopian families healthier and better able to feed themselves. Australia Food Security. Ethiopia Food Security. Famines in Ethiopia. Traditionally the Economy of Ethiopia was based on subsistence agriculture, with an aristocracy that consumed the surplus. 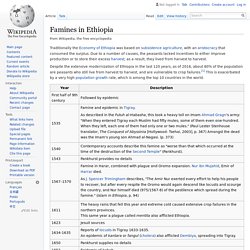 Due to a number of causes, the peasants lacked incentives to either improve production or to store their excess harvest; as a result, they lived from harvest to harvest. Despite the extensive modernization of Ethiopia in the last 120 years, as of 2016, about 80% of the population are peasants who still live from harvest to harvest, and are vulnerable to crop failures.[1] This is exacerbated by a very high population growth rate, which is among the top 10 countries in the world. See also[edit] References[edit] Unless indicated otherwise, information is based on the following sources: For the period before 1800, Richard R.K. External links[edit] EIU Global Food Security Index 2016 Findings & Methodology. SDG 2 Event Highlights Need for Deep Transformation. 12 July 2016: A discussion hosted by Biovision, the Institute for Sustainable Development and International Relations (IDDRI), the Sustainable Development Solutions Network (SDSN), and the Permanent Mission of Senegal highlighted two initiatives to support the achievement of Sustainable Development Goal (SDG) 2 (End hunger, achieve food security and improved nutrition and promote sustainable agriculture). 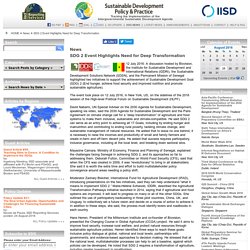 The Zero Hunger Challenge - Food prices and the market. 12. Global hunger declines for first time in 15 years: UN. The number of global hungry has declined by nearly 10 percent, the first drop in the number of undernourished since 1995, the UN food agency said in its annual report on Tuesday. 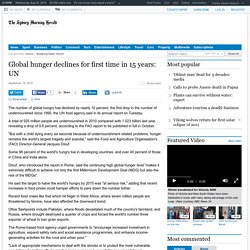 A total of 925 million people are undernourished in 2010 compared with 1.023 billion last year, revealing a drop of 9.6 percent, according to the FAO report to be published in full in October. "But with a child dying every six seconds because of undernourishment related problems, hunger remains the world's largest tragedy and scandal," said the Food and Agriculture Organisation's (FAO) Director-General Jacques Diouf. Food and Agriculture Organization of the United Nations. This year´s annual State of Food Insecurity in the World report takes stock of progress made towards achieving the internationally established Millennium Development Goal (MDG1) and World Food Summit hunger targets and reflects on what needs to be done, as we transition to the new post-2015 Sustainable Development Agenda. 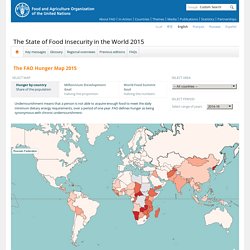 The report reviews progress made since 1990 for every country and region as well as for the world as a whole. Progress towards the MDG 1 target, however, is assessed not only by measuring undernourishment, or hunger, but also by a second indicator – the prevalence of underweight children under five yearsof age. Progress for the two indicators across regions and over time, is compared, providing insights into the complexity of food security. Overall progress not with standing, much work remains to be done to eradicate hunger and achieve food security across all its dimensions.

Globalhunger. Let's act before El Nino ravages the Horn of Africa. 40 things you didn't know about 40 Hour Famine. World Vision Australia started the 40 Hour Famine in 1975, making it the big 4-0 this year. 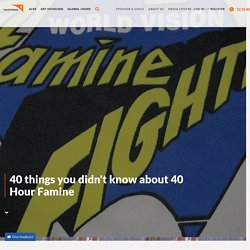 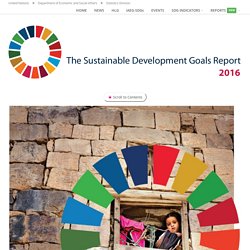 This agenda is a road map for people and the planet that will build on the success of the Millennium Development Goals and ensure sustainable social and economic progress worldwide. It seeks not only to eradicate extreme poverty, but also to integrate and balance the three dimensions of sustainable development—economic, social and environmental—in a comprehensive global vision. It is vital that we begin implementation with a sense of opportunity and purpose based on an accurate evaluation of where the world stands now. Ethiopian drought 2016. Root Capital Food Security Small.

40 years on, the 40 Hour Famine helped millions. By 1978 the event was national, and now 400,000 people across 20 countries take part – or pretend to; Aussies and our Kiwi counterparts prove it’s tougher Down Under, with other countries holding 30, 24, 20, 12 and even eight hour famines! 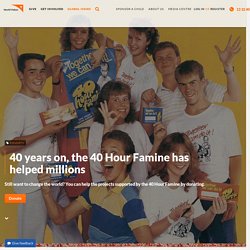 But when the cast of Neighbours joined the Famine in 1994, they committed to the full 40 hours, and in 1997 ABC hit Heartbreak High even staged a school sleepover for its characters as they swapped three square meals for barley sugars and water. Over the years millions of participants have either signed up to do their bit, or donated to someone doing the Famine. Actors Hugh Jackman, Rowena Wallace, Rebecca Gibney, Craig McLachlan, Jason Donovan, Andrew Daddo and Garry McDonald have all put their empty stomachs where their mouths are, as have sportsmen Dennis Lilley, David Boon and Andrew Gaze, and musicians Angry Anderson, Marina Prior and James Morrison. Wfp273887. Wfp284082. Sustainable Development Goal #2. Ethiopia. Ethiopia, with nearly a million km square, is almost synonymous with the Horn of Africa. 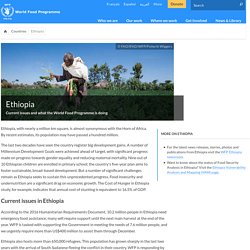 By recent estimates, its population may have passed a hundred million. The last two decades have seen the country register big development gains. A number of Millennium Development Goals were achieved ahead of target, with significant progress made on progress towards gender equality and reducing maternal mortality. Nine out of 10 Ethiopian children are enrolled in primary school; the country's five-year plan aims to foster sustainable, broad-based development. But a number of significant challenges remain as Ethiopia seeks to sustain this unprecedented progress. Sdgsforaustralia interimreport. 1370.0 - Measures of Australia's Progress, 2010. Ethiopia gripped by drought the worst in 50 years. Helping hand ... 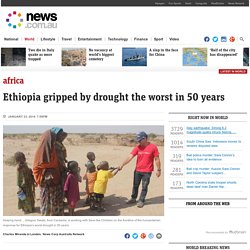