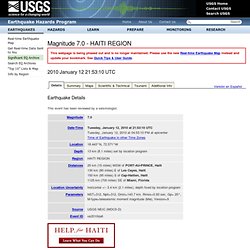 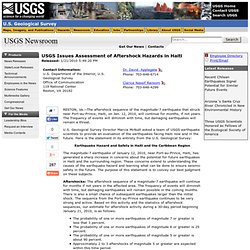 —The aftershock sequence of the magnitude-7 earthquake that struck near Port-au-Prince, Haiti, on Jan. 12, 2010, will continue for months, if not years. The frequency of events will diminish with time, but damaging earthquakes will remain a threat. U.S. Geological Survey Director Marcia McNutt asked a team of USGS earthquake scientists to provide an evaluation of the earthquakes facing Haiti now and in the future. Here is the statement in its entirety from the U.S.

Digicel Mobiles Haiti. Twitter and Digicel Eliminate SMS Charges for Haiti. TelecomsWith out Borders. Multilink Haiti (InternetHaiti) BBCNews - SocialNetworks offer a lifeline. Inmarsat's chief executive Andrew Sukawaty explains to the BBC's Daniel Emery how his firm's satellite network is assisting in Haiti's rescue efforts The collapse of traditional channels of communication in Haiti has again highlighted the role of social media and the internet in disasters. 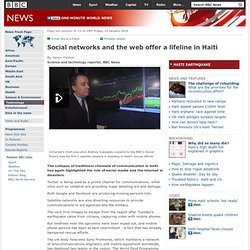 Twitter is being used as a prime channel for communications, while sites such as Ushahidi are providing maps detailing aid and damage. Both Google and Facebook are producing missing persons lists. Satellite networks are also diverting resources to provide communications to aid agencies and the military. The very first images to escape from the region after Tuesday's earthquake came from citizens, capturing video with mobile phones. But landlines near the epicentre have been wiped out, and mobile phone service has been at best intermittent - a fact that has already hampered rescue efforts.

Community service Just seconds after the earthquake, people began to send messages from Haiti through Twitter. @NetHope_org is bringing connectivity... Bringing Technology and Communication to Haiti. Words cannot begin to describe the shock in the wake of this week's tragic events in Haiti. 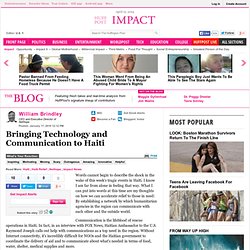 I know I am far from alone in feeling that way. What I can put into words at this time are my thoughts on how we can accelerate relief to those in need: By establishing a network by which humanitarian agencies in the region can communicate with each other and the outside world. Communication is the lifeblood of rescue operations in Haiti. In fact, in an interview with FOX News, Haitian Ambassador to the U.S. Raymond Joseph calls out help with communications as a top need in the region. Press Releases. Blackbaud Supports NetHope in its Efforts to Restore Communications in HaitiDonation will provide 20 humanitarian organizations working in Haiti with critical IT resources Charleston, S.C. 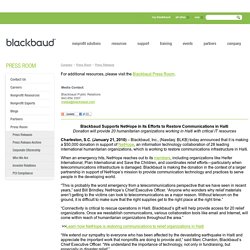 (January 21, 2010) – Blackbaud, Inc., (Nasdaq: BLKB) today announced that it is making a $50,000 donation in support of NetHope, an information technology collaboration of 28 leading international humanitarian organizations, which is working to restore communications infrastructure in Haiti. When an emergency hits, NetHope reaches out to its members, including organizations like Heifer International, Plan International and Save the Children, and coordinates relief efforts—particularly when telecommunications infrastructure is damaged. Blackbaud is making the donation in the context of a larger partnership in support of NetHope’s mission to provide communication technology and practices to serve people in the developing world. NetHope_org: RT @blackbaud: We are plea... Providing emergency communications for Haiti. « BLITZKRIEG BOPP. Last night while sitting on the couch I got one of my brainwaves; why not try to organise a volunteer effort to set up an outdoor wifi network for Haiti using wifi? 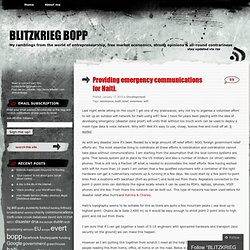 Fireside Int.: Addicted to electronic com... Samaritan's Purse: Please pray for our commun... How to Connect Port-au-Prince with a Wireless Network - Haiti Re. Inveneo's long-distance WiFi network in Port-au-Prince, Haiti As you can see from the network diagram above, Inveneo's long-distance WiFi links connecting NetHope member organizations is starting to be far-reaching. 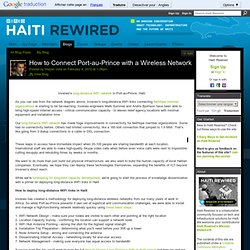 Inveneo engineers Mark Summer and Andris Bjornson have been able to bring high-speed Internet access - critical communication capacity - to eleven relief agency locations with minimal equipment and installation time Our long-distance WiFi network has made huge improvements in connectivity for NetHope member organizations. Some had no connectivity before. Others had limited connectivity, like a 160 kbit connection that jumped to 1.6 Mbit. These leaps in access have immediate impact when 20-100 people are sharing bandwidth at each location. We want to do more than just build out physical infrastructure; we also want to build the human capacity of local Haitian companies. Tracker collecting+ connecting links. HaitiLiveFeeds: #FF Individuals making a d...

Organisation Registry. We have we need. Let's Work Together to Save Lives. CNN_Internat haiti-aid list... SAR sectors map. Skip to main content Updates Your gateway to all content to date. 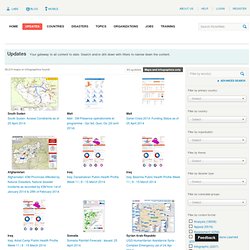 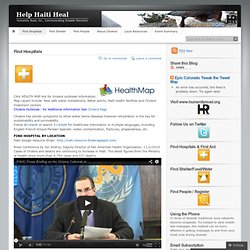 Field Hospitals. Map FieldHospitals IDPs Port-au -Prince. BaptistHaitiMission (BHMhaiti) Welcome to the Baptist Haiti Mission. Msh.org - Management Sciences for Health - Medicines Are Mak. The 's dedicated staff in Haiti is distributing kits of medicines and other medical supplies from existing stock in the project warehouse to 14 hospitals in Port-au-Prince. 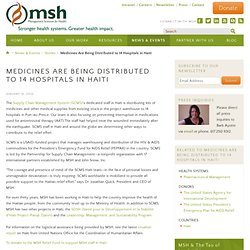 Our team is also focusing on preventing interruption in medications used for antiretroviral therapy (ART).The staff had helped treat the wounded immediately after the earthquake. SCMS staff in Haiti and around the globe are determining other ways to contribute to the relief effort. SCMS is a USAID-funded project that manages warehousing and distribution of the HIV & AIDS commodities for the President's Emergency Fund for AIDS Relief (PEPFAR) in the country. SCMS is led by the Partnership for Supply Chain Management—a nonprofit organization with 17 international partners established by MSH and John Snow, Inc. "The courage and presence of mind of the SCMS Haiti team—in the face of personal losses and unimaginable devastation—is truly inspiring.

ET in a benefit called Hope For Haiti Now: A Global Benefit for Earthquake Relief. The telethon was organized by MTV Networks and George Clooney, and other networks taking part will include the websites of MySpace, YouTube, Hulu, AOL, Fancast, VH1, CBS, MSN, Bing, Yahoo, Rhapsody, TV.com, BET and CNN. The event will be streamed by mobile providers AT&T, Verizon and Sprint, too. There will be more than 30 networks involved once all's said and done. Expect this to dominate both the Internet and the television tomorrow night. A U2/Jay-Z/Rihanna collaboration and a jam including Kid Rock, Keith Urban and Sheryl Crow will be among the main events.

[UPDATE] See the bottom of this post for links and a livestream embed. Gigya - Connecting content and consumers with the social web. Telethon tries to raise 'Hope for Haiti' "Hope for Haiti" one of the most widely distributed prime-time televised benefits in historyActors staff the phones, musicians play the songs on telethonTelethon broadcast on more than 25 networks including CNN, MTV and Planet GreenCNN's Anderson Cooper reports live from Haiti during the event Los Angeles, California (CNN) -- Solemn music from the world's biggest stars served as the soundtrack to Friday night's telethon for Haiti relief, but the fundraiser ended with Wyclef Jean shouting "Enough of the moping, let's rebuild Haiti.

" Organizers did not immediately say how much money was raised during the two-hour "Hope for Haiti Now" show, but donations will continue to flow in as the phone lines remained open and the night's musical performances are sold on iTunes. A moving performance by Alicia Keys opened the telethon. "The Haitian people need our help," Clooney said. HopeForHaitiNow: A Map Of Global Conversation.

Taking Stock in the Testimony of the Crowd - NYTimes.

Other pearltree users about haiti. Diaspora. Haiti quake Wikipedia. The 2010 Haiti earthquake was a catastrophic magnitude 7.0 Mw earthquake, with an epicenter near the town of Léogâne (Ouest Department), approximately 25 kilometres (16 mi) west of Port-au-Prince, Haiti's capital. The earthquake occurred at 16:53 local time (21:53 UTC) on Tuesday, 12 January 2010.[7][8] By 24 January, at least 52 aftershocks measuring 4.5 or greater had been recorded.[9] An estimated three million people were affected by the quake.[10] Death toll estimates range from 100,000[6] to 159,000[5] to Haitian government figures from 220,000[11][12] to 316,000 that have been widely characterized as deliberately inflated by the Haitian government.[4] The government of Haiti estimated that 250,000 residences and 30,000 commercial buildings had collapsed or were severely damaged.[13] Many countries responded to appeals for humanitarian aid, pledging funds and dispatching rescue and medical teams, engineers and support personnel.