Here’s The Impressive Way Google Is Providing Internet To Peru – we are mitú. Balloons the size of tennis courts are providing the internet across Peru. 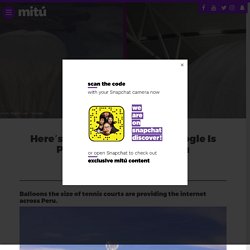 For the last few months, Google has sent several internet-enabled balloons into Peru’s stratosphere, roughly 10 to 30 miles above the Earth, enabling thousands of Peruvians access to the internet they wouldn’t otherwise have. The program, known as Project Loon, has been in development by Google’s parent company, Alphabet, over the last few years.

“Project Loon” has provided much-needed internet accessibility to flood-damaged Peru. As the BBC reports, over the last three months, Peruvians have used the balloons to send 160 GB worth of data, which translates to “two million emails” or “30 million instant messages” that would not have been sent otherwise. Líneas y geoglifos de Nasca. 71 Interesting Facts about Peru. References 1Begazo, Alfredo. 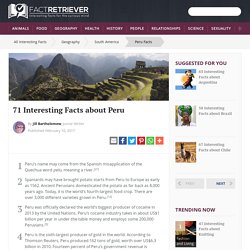 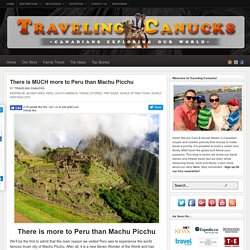 After all, it is a new Seven Wonder of the World and has become one of the most recognizable tourist attractions on the planet. Like many before us, our goal was to hike the legendary Inca Trail to Machu Picchu. The challenging 4-day trek has become one of the most memorable experiences we’ve had overseas. Realia Project. Peru in July. Peru Festivals and Events Calendar for 2015. For all the major happenings in Peru in 2016, see Peru in 2016: A Calendar of Festivals, Concerts and Other Events. 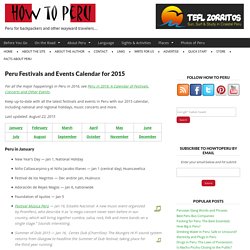 Keep up-to-date with all the latest festivals and events in Peru with our 2015 calendar, including national and regional holidays, music concerts and more. Last updated: August 22, 2015. Peruvian currency. Peru Pushes Guinea Pigs As Food. After 34 years of patient tinkering, researchers at Peru's most prestigious agrarian university have bred a new culinary export they hope will scamper onto dinner plates throughout the world: the super guinea pig. 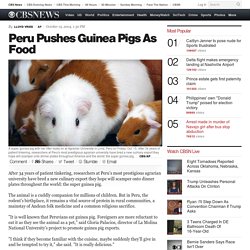 The animal is a cuddly companion for millions of children. But in Peru, the rodent's birthplace, it remains a vital source of protein in rural communities, a mainstay of Andean folk medicine and a common religious sacrifice. "It is well known that Peruvians eat guinea pig. Foreigners are more reluctant to eat it as they see the animal as a pet," said Gloria Palacios, director of La Molina National University's project to promote guinea pig exports. "I think if they become familiar with the cuisine, maybe suddenly they'll give in and be tempted to try it," she said. Peruvians consume an estimated 65 million guinea pigs each year. The 1,000 guinea pigs shipped out weekly — mostly to the United States — each weigh nearly 2½ pounds, said Dr. By Rick Vecchio. 5 Reasons Why Peru Is a Country With Much to Envy. Peru is one of those places that make iconically beautiful countries like South Africa and Thailand feel a hint of jealousy. 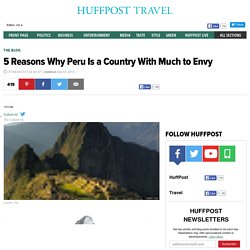 The nation’s thriving melting pot of cultures reflect a vibrant, diverse community, many with roots as far back to the Incas and other sophisticated pre-Columbian civilizations. The country is riddled with archaeological sites that tell the story of these civilizations, which left a legacy that still lives on in the art, customs and traditions found in modern-day Peru. I journeyed to Peru with avid hopes of climbing Machu Picchu and sipping coca tea with locals donning traditional Quechua garb.

I did this, but also learned that this experience was only a minute sliver of the countless facets that make Peru a country with much to envy. When traveling to Peru you’ll most likely fly into Lima, a city rich with Pre-Columbian ruins and enchanting Spanish Colonial architecture. We settled in for lunch at Tanta, one of Gaston Acurio’s restaurants. Cuture - Information About the Culture of Peru. Language The great culture of ancient Peru is also expressed by a legacy of wide variety of native languages that co-exist in its territory. 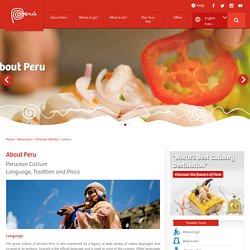 Inca - Facts & Summary. The Inca first appeared in what is today southeastern Peru during the 12th century A.D. 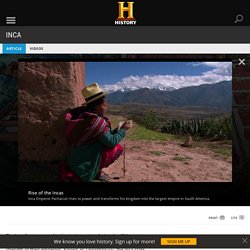 According to some versions of their origin myths, they were created by the sun god, Inti, who sent his son Manco Capac to Earth through the middle of three caves in the village of Paccari Tampu. After killing his brothers, Manco Capac led his sisters and their followers through the wilderness before settling in the fertile valley near Cusco circa 1200. Fast food in peru. Peru this Week. Peru Transportation - Taxi, Train, Bus & Airport Tips. Peru Guide: The main stages of education, Education levels, the school year, uniform and grades: The Peruvian. The Art That Made Peru Peru. The fearsome forehead ornament with the feline head and octopus-shaped tentacles ending in catfish heads, now of view in the massive survey of Peruvian art at the Montreal Museum of Fine Arts, is silent in some ways and speaks volumes in others. 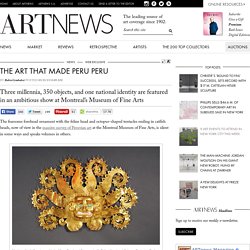 Mochica, North Coast, possibly La Mina, Forehead Ornament with Feline Head and Octopus Tentacles Ending in Catfish Heads, 100 – 800 A.D., gold, chrysocolla, and shells. Crafted in gold, chrysocolla and shells, this sea god was made for a Mochica ruler some time between 100 and 800 A.D. Scholars believe it was buried at a site called La Mina in the Jequetepeque Valley, on Peru’s northern coast.

But they don’t know for sure. Cuy - Traditional Andean Entree: Description and Recipes. By Bonnie Hamre Updated January 29, 2016. 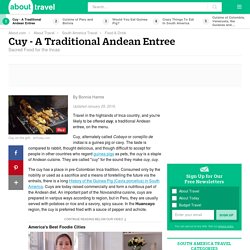 Travel in the highlands of Inca country, and you're likely to be offered cuy, a traditional Andean entree, on the menu. Cuy, alternately called Cobayo or conejillo de indias is a guinea pig or cavy. Nasca Lines. OverlapMaps - Instantly compare any two places on Earth! Peru. Peru Peru is a country in South America, situated on the western side of that continent, facing the South Pacific Ocean and straddling part of the Andes mountain range that runs the length of South America. Peru is bordered by Ecuador and Colombia to the north, Brazil and Bolivia to the east, and Chile to the south. Peru is a country that has a diversity and wealth not common in the world. The main attractions are their archaeological patrimony of pre-Columbian cultures and the hub of the Inca's empire, their gastronomy, their colonial architecture (it has imposing colonial constructions) and their natural resources (a paradise for ecological tourism).

Understand[edit] Although Peru has rich natural resources and many great places to visit, the poverty scale reaches 25.8% of the population. The Peruvian economy is healthy and quite strong, however inequality is still common. The word gringo is used commonly but is not generally intended as offensive. Electricity[edit] Time Zone[edit] [edit]

Peru. National Geographic. Visit Perú. The World Factbook. ShowIntroduction :: PERU Panel - Collapsed Ancient Peru was the seat of several prominent Andean civilizations, most notably that of the Incas whose empire was captured by Spanish conquistadors in 1533. Peru declared its independence in 1821, and remaining Spanish forces were defeated in 1824. After a dozen years of military rule, Peru returned to democratic leadership in 1980, but experienced economic problems and the growth of a violent insurgency. President Alberto FUJIMORI's election in 1990 ushered in a decade that saw a dramatic turnaround in the economy and significant progress in curtailing guerrilla activity. Nevertheless, the president's increasing reliance on authoritarian measures and an economic slump in the late 1990s generated mounting dissatisfaction with his regime, which led to his resignation in 2000.