Peruvian fire departments to acquire 70 new trucks. Related Articles A total of 70 emergency response apparatus will be transferred to the General Body of the Peruvian Volunteer Fire Department in Lima, Peru, in a bid to be prepared for emergencies at any time and protect people across the country. 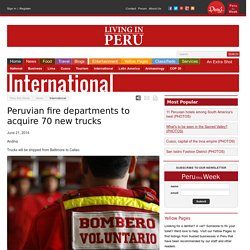 Spartan ERV, a business unit of Spartan Motors, stated that it has received an additional 14 unit order from the General Body of the Peruvian Volunteer Fire Department in Lima, as an addendum to a 56 unit order secured in October, 2013. The 70 units is the largest fire apparatus order in Spartan Motors’ corporate history, and further validates the viability of the company’s Strategic Plan. Production for the 70 units has commenced, with a planned completion date of later this calendar year. England Logistics, company that will help deliver Spartan ERV units to Peru, announced that this launch is one of its largest ocean projects.

The entire 70 unit shipment is projected to be completed by October 2014. ...en Perú - Travel Culture History News. With a reckless disregard for their own well-being and a commendable regard for the well-being of others, Peru’s firefighters are nothing short of heroes. 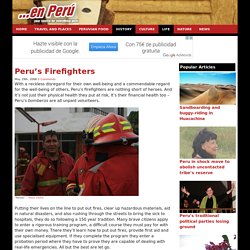 And it’s not just their physical health they put at risk, it’s their financial health too – Peru’s bomberos are all unpaid volunteers. “Heroes” – Alexis Castro Putting their lives on the line to put out fires, clear up hazardous materials, aid in natural disasters, and also rushing through the streets to bring the sick to hospitals, they do so following a 150 year tradition. 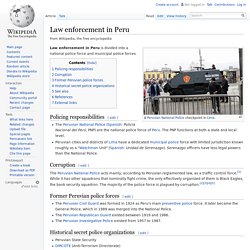 Policing responsibilities[edit] Corruption[edit] The Peruvian National Police acts mainly, according to Peruvian reglamented law, as a traffic control force.[1] While it has other squadrons that nominally fight crime, the only effectively organized of them is Black Eagles, the bank security squadron. The majority of the police force is plagued by corruption.[2][3][4][5] Former Peruvian police forces[edit] Historical secret police organizations[edit] Peruvian State SecurityDIRCOTE (Anti-Terrorism Directorate) See also[edit] National Police of Peru. Functions of the National Police of Peru[edit] Under its law of creation, the National Police has the following functions: History[edit] The history of the Peruvian police goes back to the age of the Incas: however, it was since Peru became an independent republic in 1821 that the police began to be seen as a definite institution with its own mission and functions.[2] 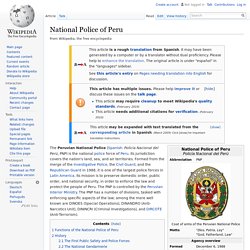 Peru Education System. Primary Education Education in Peru through primary and secondary school is theoretically free for children from ages 7 to 16, although in practice inaccessible to many rural children. 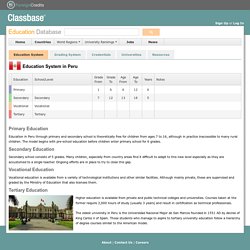 The model begins with pre-school education before children enter primary school for 6 grades. Secondary Education Secondary school consists of 5 grades. Many children, especially from country areas find it difficult to adapt to this new level especially as they are accustomed to a single teacher. Vocational Education Vocational education is available from a variety of technological institutions and other similar facilities. 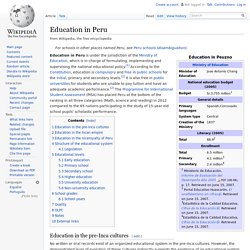 However, the demonstrated level of evolution of these cultures indirectly suggests the existence of an educational system. Each culture developed an ideal way of training people for their own competitive interests and particular specializations. Such training and education could explain the metalwork, ceramics, and textiles that have survived to this day, which were produced with techniques which had been passed down and perfected, and have unfortunately been lost with the conquering of many other cultures. 10 Bizarre Creatures of the Amazon Rainforest — Rainforest Cruises. Fun Peru Facts for Kids - Interesting Information about Peru. RARE ANIMAL PHOTOS: Giant Armadillo, Bush Dog, More. 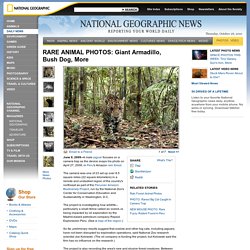 The camera was one of 23 set up over 8.5 square miles (22 square kilometers) in a remote and unstudied region of the country's northeast as part of the Peruvian Amazon Biodiversity Project, run by the National Zoo's Center for Conservation Education and Sustainability in Washington, D.C. The project is investigating how wildlife--particularly a small feline called an ocelot--is being impacted by oil exploration by the Madrid-based petroleum company Repsol Exploración Peru. (See a map of the region.) So far, preliminary results suggest that ocelots and other big cats, including jaguars, have not been disrupted by exploration operations, said National Zoo research scientist Joe Kolowski.

Top 15 Most Dangerous Animals in the Amazon Rainforest - Fun Facts You Need to Know! The Amazon rainforest is the largest rainforest in the world, occupying an area shared by nine countries — Brazil, Peru, Colombia, Venezuela, Ecuador, Bolivia, Guyana, Suriname and French Guiana. 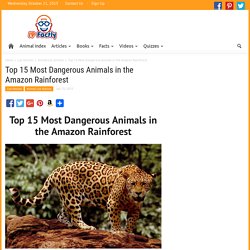 In fact, it is so large that it represents half of the remaining rainforests on Earth. It is an amazing natural sanctuary, home to unique plants and roughly 16,000 species of animals, many of which cannot be found in other parts of the world. Animals and Plants Unique to Peru. THE PERUVIAN AMAZON- Sloths, Toucans and Pink Amazon River Dolphin. Tree Frog & Cricket (a.k.a. 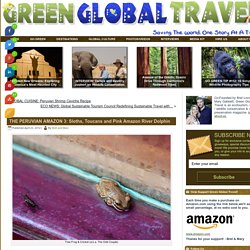 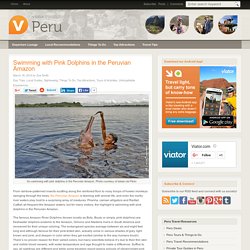 Photo courtesy of lubasi via Flickr. From rainbow-patterned insects scuttling along the rainforest floor to noisy troops of howler monkeys swinging through the trees, the Peruvian Amazon is teeming with animal life, and even the murky river waters play host to a surprising array of creatures. Piranha, caiman alligators and Redtail Catfish all frequent the Amazon waters, but for many visitors, the highlight is swimming with pink dolphins in the Peruvian Amazon. The famous Amazon River Dolphins (known locally as Boto, Boutu or simply, pink dolphins) are freshwater dolphins endemic to the Amazon, Orinoco and Madeira rivers in South America and renowned for their unique coloring. Three Architectural Periods in Peru - Canin Associates. Peru as a country boasts a mix of cultures, climates, and architecture.

What makes it an incredible place to visit is that modern Peru seamlessly blends together its diverse history. Nonetheless, each culture and each historical period is still visible and alive throughout the country. Traveling through Peru last year, I noticed that a recurring theme was not only the country’s architecture, but the way it was adapted to changing circumstances. Discover Peru – Inca Architecture. It is commonly questioned as to how the Incas were able to develop such an exquisite architecture without the use of the wheel and modern tools. Their buildings have withstood five centuries in an earthquake prone zone and provided the foundations of many current buildings. Inca architecture was inherited from pre-Inca civilizations. Archeological studies show that the Incas reproduced and updated many buildings, especially those in the Middle Horizon period. In newly conquered territories the Incas built administrative centers using pre-existing buildings and adding new elements, such as in the Sanctuary of Pachacamac located south of Lima.

The Best Historic Architecture in Peru. THE INCA CREATION MYTH. THE INCA CREATION MYTH. Peru People - Population, Nationality, and Religion. PeopleNationality: Noun and adjective--Peruvian(s). Population (2003 est.): 28.4 million.Annual growth rate (2003 est.): 1.61%. Ethnic groups (1961): Indian 45%. Mestizo 37%. White 15%. Black, Japanese, Chinese, and other 3%. Peru People , Culture , Festivals of Peru. People, Culture, Festivals occupy an important position in Peru. Most of the People of Peru are mestizo. Mestizo is an admixture of Amerindians and Peruvians of European ancestry. The rate of the Peruvians of European ancestry is 15 %. A small number of African, Japanese, and Chinese ancestries are also found in Peru.

Peru: Maps, History, Geography, Government, Culture, Facts, Guide & Travel/Holidays/Cities. Location - Peru's Geography and Climate. Location Extensión Geography Peru is an extremely diverse country, with 11 ecological regions and 84 of the world’s 117 different types of “life zone”. It has a huge variety of scenery thanks to its geography, which also provides it with a wide range of natural resources. The country has 3 main regions according to the traditional method of dividing the country by altitude: coast, mountains and jungle. Coast: Characterized by a narrow band of deserts and fertile valleys alongside the Pacific Ocean. Highlands: This is the mountainous region of Peru, where the Andes mountain range dominates the landscape and contains various ecological regions and altitudes.