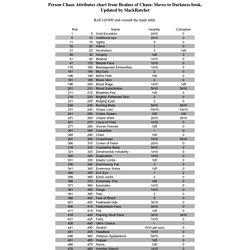 Updated by SlackRatchet Roll 1d1000 and consult the main table. Acid Excretion The mutant sweats an extremely potent acid. The mutant can not wear armor and normal melee weapons are destroyed when they successfully hit the mutant. Additional eye The mutant grows an extra eye. Agility The mutant becomes extremely agile; adjust Agility by +10 permanently. Albino The mutant is weakened and enervated. Alcoholism The mutant’s behavior is unstable and unpredictable. Atrophy One or more parts of the mutant's body become shriveled and atrophied. Of Dice and Djinn: Populate this Dungeon! I found this map over at Lost Papers of Tsojcanth that is supercool. 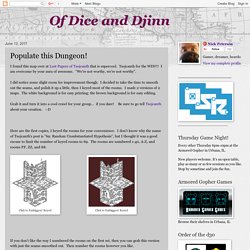 Tsojcanth for the WIN!!! I am overcome by your aura of awesome. Miska’s Maps – Adventures Beyond Space-Time. I think drawing maps of fantastic places is cool. 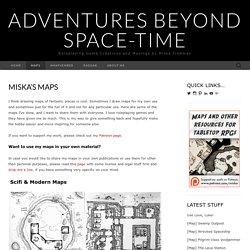 Sometimes I draw maps for my own use and sometimes just for the fun of it and not for any particular use. Here are some of the maps I’ve done, and I want to share them with everyone. I love roleplaying games and they have given me so much. This is my way to give something back and hopefully make the hobby easier and more inspiring for someone else. If you want to support my work, please check out my Patreon page. 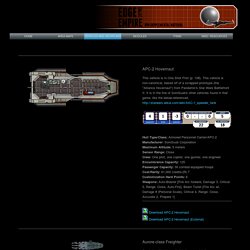 This vehicle is non-canonical, based off of a scrapped prototype (the "Alliance Hovernaut") from Pandemic's Star Wars Battlefront II. It is in the line of SoroSuub's other vehicles found in that game, like the below-referenced. Peter Thompson EotE Miscellaneous Resources. The Geek Flag: Star Wars RPG (FFG) resources. A resource of fan made material for the STAR WARS RPG by Fantasy Flight Games. 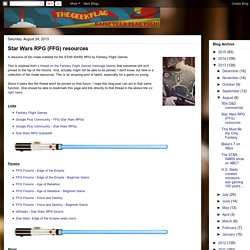 This is inspired from a thread on the Fantasy Flight Games message boards that somehow still isn't pinned to the top of the forums. And, actually might not be able to be pinned. Edge of the Empire – Age of Rebellion – Force and Destiny. Compiled Resources List - Star Wars: Edge of the Empire RPG - FFG Community. Jump to content <div class='message error'><strong>Javascript Disabled Detected</strong><p>You currently have javascript disabled. 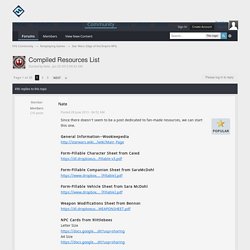 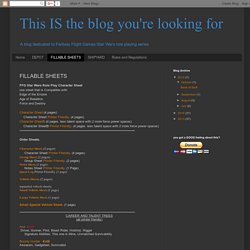 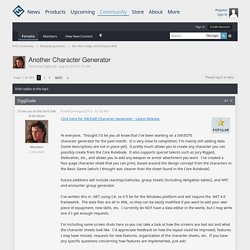 I've removed all descriptions and replaced them with page numbers. Talents and force powers, however, have a shortened version of the flavor text that shows up on the character sheet. This is the text that appears in the spec tree, as opposed to the text in the talents (or force) chapter. If I eliminate this, it affects the character sheet. But... if that's the way they want it, I'll take out the talent and force power text as well.That means I'll have to create an editor so you can put them in yourself. The Hitchhiker's Guide to Elite: Dangerous. If you didn't already know, UI stands for user interface. 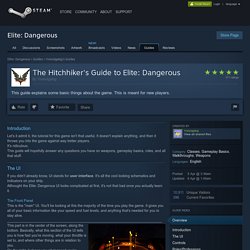 It's all the cool looking schematics and indicators on your ship.Althought the Elite: Dangerous UI looks complicated at first, it's not that bad once you actually learn it. The Front Panel This is the "main" UI. You'll be looking at this the majority of the time you play the game. [Tuesday Map] The Temple of Greed. Today we are taking a quick break from the MegaDelve to post up my most recent isomorphic dungeon map. 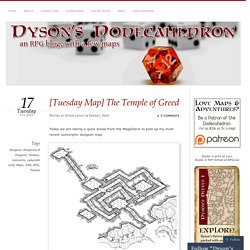 Temple of Greed (with grid) I received four pads of isometric graph paper from my girlfriend for Christmas (three letter-sized and one ledger – which is too big for my scanner). Over the next few months I’ll be posting some of my various trials with the paper in question. One important trick I’ve learned though is to avoid “overlap” between the areas on the map, which generally means making sure that stuff on the upper left is at higher or equal elevations to areas on the lower right.

Also, adding a grid is not as simple as with my regular maps. Untitled. Weekly Tips 2 - How to design a gatehouse, using grids and building isometric maps. Castle Defence – a classic gatehouse Castles are built for more than one reason – people live there, guards are stationed there and often they are political power centers for the region.

But first and foremost they are built to keep people out. The weak point in any castle is it’s front door, and a number of techniques were perfecte over the years to make sure that someone trying to attack a castle would have a hard time of it. Now attackers might not be as obvious as a massed army at the gates – unsavoury people sneak in too. This gatehouse design was used in many places – including Linlithgow Palace, the palace I grew up beside and spent a lot of time in. Visitors approach from the south (in this diagram). This provides a robust defence mechanism against invaders, but it’s far from fullproof. Weekly tips 3 - Dungeons! Using Layer Effects, Stroking Walls and Going Old School TSR Blue.

This week it’s all about the dungeon, and I’ve been covering ways of creating dungeon maps without actually drawing anything. These tips should work whether you’re a natural doodler or you think pencils are the devil incarnate. Using Layer Effects and Blend Modes to create quick dungeons Last week I posted a short tutorial on using grids in Photoshop to create a quick dungeon map. The last panel of that tutorial showed a dungeon map with some layer effects added to give it a little pop. Today I’m going through the layer effects I used to show how it’s done. A note of caution on layer modes – they can easily be overused. Dungeon Hatching. There’s a lot of old-school gaming posts going round today, and I thought this one would fit in. This isn’t really a tutorial, more a set of thoughts on different ways to indicate walls on a line map. 1.

Hatching This just looks great. There’s no doubt about it. After hatching the walls, I go back over the wall lines again to make them darker. 2. How to use Hatching to Show Elevation on a Map. None of my dungeons are flat. I always have things for people to jump off or fall into. But if you’re laying out a top down view it can be tricky to show elevation on a map. A simple method is to use arrows, and basic shading to show higher/lower levels (v1 in the diagram). However – it’s hard to tell which way the arrow points (is that up or down?)

, and shading a whole flat area is unsatisfying and flat. So – v2 – you can use hatching to lay in the thrown shadows. This was, without a doubt, the best map-making tutorial I found. The downloads this artist has are really awesome and I had a fun time playing wit… Worldbuilding By Map. This article was originally written for people building their own worlds for novel writing, but the process is useful for anyone who wants to create a world and draw a map. Let’s get one thing out of the way right now. A map shouldn’t be pretty. Vatican–Avignon Ley line - Toaru Majutsu no Index Wiki. The Vatican–Avignon Ley line is a ley line that connects the Vatican and Avignon, as a "pipeline" for magical power between the two cities. List of Medieval and Ancient Monsters. Draw Dungeons like Dyson. Draw Dungeons Like Dyson. Untitled. Mount&Blade/Companions. Each companion dislikes the companions on either side of them (Example: Borcha dislikes Deshavi and Klethi).