Would A Medieval Think Ramsay Bolton Was All That Bad? Spoilers for Season 6 of Game of Thrones. 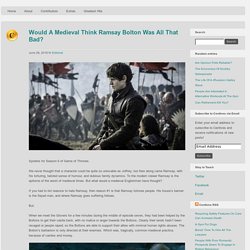 We never thought that a character could be quite so unlovable as Joffrey; but then along came Ramsay, with his torturing, twisted sense of humour, and dubious family dynamics. To the modern viewer Ramsay is the epitome of the worst of medieval times. But what would a medieval Englishman have thought? If you had to list reasons to hate Ramsay, then reason #1 is that Ramsay tortures people. His house’s banner is the flayed man, and where Ramsay goes suffering follows. But. When we meet the Glovers for a few minutes during the middle of episode seven, they had been helped by the Boltons to get their castle back, with no malice or anger towards the Boltons. Medieval warfare was not primarily about pitched battles, but was overwhelmingly focused on siege-craft. So to help reduce costs, you need to either force your enemy to come out of their castle and meet you, or intimidate them into surrendering.

This is slightly more complicated. Not even close. Using Salt in the Middle Ages. By Danièle Cybulskie Being a Canadian in the throes of winter, it’s hard not to contemplate the value of salt, both for roads and for comfort food. 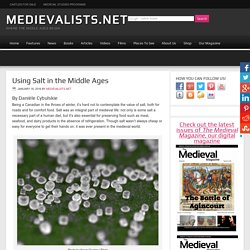 Salt was an integral part of medieval life: not only is some salt a necessary part of a human diet, but it’s also essential for preserving food such as meat, seafood, and dairy products in the absence of refrigeration. Though salt wasn’t always cheap or easy for everyone to get their hands on, it was ever present in the medieval world. Photo by Kevin Dooley / Flickr The amount of salt needed varied from place to place, and from purpose to purpose. For an island nation like England, salt wasn’t too hard to come by in a lot of regions. As I’ve mentioned elsewhere, because not everyone found salt easy to come by, it was used as a marker of social status. The Impalings of Vlad the Impaler. Caitlin Green: The medieval 'New England': a forgotten Anglo-Saxon colony on the north-eastern Black Sea coast.

Although the name 'New England' is now firmly associated with the east coast of America, this is not the first place to be called that. 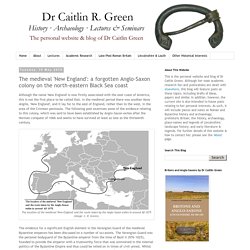 In the medieval period there was another Nova Anglia, 'New England', and it lay far to the east of England, rather than to the west, in the area of the Crimean peninsula. The following post examines some of the evidence relating to this colony, which was said to have been established by Anglo-Saxon exiles after the Norman conquest of 1066 and seems to have survived at least as late as the thirteenth century. Who were the Early Medieval Bavarians? « Heavenfield. My reading for the last year has been all over the place as I try to catch up on the world of the Plague of Justinian. 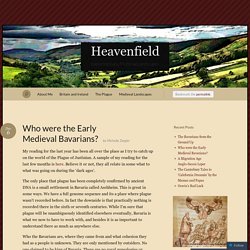 A sample of my reading for the last few months is here. Believe it or not, they all relate in some what to what was going on during the ‘dark ages’. The only place that plague has been completely confirmed by ancient DNA is a small settlement in Bavaria called Aschheim. This is great in some ways. We have a full genome sequence and its a place where plague wasn’t recorded before. Who the Bavarians are, where they came from and what cohesion they had as a people is unknown. Alboin. Alboin (reigned 560-572 CE) was a king of the Lombards who led his people into Italy and founded the Kingdom of the Lombards which lasted from 568-774 CE. 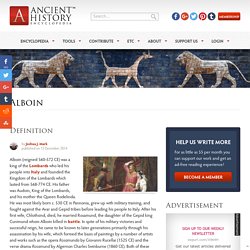 His father was Audoin, King of the Lombards, and his mother the Queen Rodelinda. He was most likely born c. 530 CE in Pannonia, grew up with military training, and fought against the Avar and Gepid tribes before leading his people to Italy. After his first wife, Chlothsind, died, he married Rosamund, the daughter of the Gepid king Cunimund whom Alboin killed in battle. In spite of his military victories and successful reign, he came to be known to later generations primarily through his assassination by his wife, which formed the basis of paintings by a number of artists and works such as the opera Rosamunda by Giovanni Rucellai (1525 CE) and the verse drama Rosamund by Algernon Charles Swinburne (1860 CE).

8 surprising facts about Pompeii’ Here, Roman historian and archaeologist Dr Joanne Berry shares eight lesser-known Pompeii facts… 1) Pompeii is not frozen in time, nor is it a perfect time-capsule The eruption of Vesuvius in AD 79 caused vast damage – fires were started, rooftops were swept away, columns collapsed. 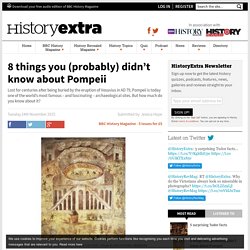 Most of the inhabitants of the town escaped into the surrounding countryside (although we have no idea how many of those died there). They took with them small valuables, like coins and jewellery, and lamps. Organic materials, like sheets, blankets, clothes, curtains, were mostly destroyed. In the years and centuries after the eruption, salvagers explored Pompeii, tunnelling through walls and removing valuable objects. 2) Pompeii resembled a giant building site It is commonly known that in AD 63 a massive earthquake caused major damage in the town.

In fact, Pompeii must have resembled a giant building site, with reconstruction work taking place in both public buildings and private houses. Why are there so many medieval paintings of people battling large snails? : AskHistorians. Orta Çağ'a Damgasını Vurmuş 10 Skandal. Skandal kelimesi her çağda gerektiği karşılığı bulmuş görünüyor. 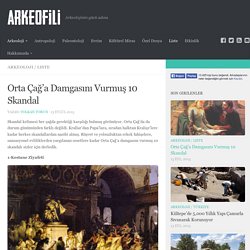 Gelinler hakkında soruşturma başlatılıyor ve ikisi suçlu bulunuyor. The Ottoman Empire: A shelter for all kinds of refugees. Today, people are competing with each other to become a U.S. citizen. 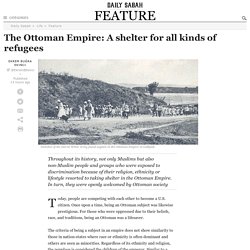 Once upon a time, being an Ottoman subject was likewise prestigious. For those who were oppressed due to their beliefs, race, and traditions, being an Ottoman was a lifesaver. The criteria of being a subject in an empire does not show similarity to those in nation-states where race or ethnicity is often dominant and others are seen as minorities. Anne of Bohemia, Queen of England. The Merovingians: The Kings and Queens of the Franks - Ancient History et cetera.

Mythologized and circumscribed for over 1500 years, the Merovingians were a powerful Frankish dynasty, which exercised control much of modern-day France, Germany, Switzerland, Austria, and the Low Countries. During the Early Middle Ages, the Merovingian kingdoms were arguably the most powerful and most important polities to emerge after the collapse of the Western Roman Empire, blending Gallo-Roman institutions with Germanic Frankish customs. Recent discoveries and new research in the field of mortuary archaeology — the study of how cultures treat the dead and what they believe about the afterlife — has renewed considerable interest in the Merovingians. In this feature interview, James Blake Wiener of the Ancient History Encyclopedia speaks to Dr. Bonnie Effros, a Professor of History at the University of Florida, about the ways in which the “archaeology of the dead” can help rewrite an important chapter in European history. JW: Dr. JW: Dr. BE: Thank you for asking, James! Turkey’s 12 best mosques. A mosque is a mosque is a mosque, right? 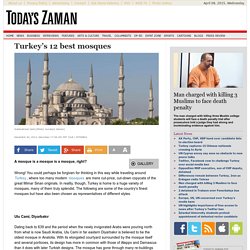 Wrong! You could perhaps be forgiven for thinking in this way while traveling around Turkey, where too many modern mosques are mere cut-price, cut-down copycats of the great Mimar Sinan originals. Database Error. The Magna Carta and its Legacy. The Impalings of Vlad the Impaler. The Rise and Fall of the Byzantine Empire. Researchers create genetic map of the British Isles. What was the actual impact of Machiavelli's "The Prince"? Why is it considered so important? : AskHistorians. The siege of Vienna in 1529 was the furthest of Ottoman extent in Central Europe. How prepared were other entities (France, England, Sweden) for a possible attack, and did they have any plans in case Vienna had fallen? : AskHistorians.