Strategic smart plants. It's easy to think of plants as passive features of their environments, doing as the land prescribes, serving as a backdrop to the bustling animal kingdom. 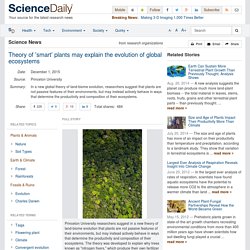 But what if the ecosystems of the world take their various forms because plant "decisions" make them that way? A new theory presented by Princeton University researchers in the journal Nature Plants suggests that in some cases that may be exactly what happens. In one of the first global theories of land-biome evolution, the researchers write that plants may actively behave in ways that not only benefit themselves but also determine the productivity and composition of their environs.

"Our theory explains biomes based on the new idea that we must consider plants to be smart and strategic," said senior author Lars Hedin, a Princeton professor of ecology and evolutionary biology and department chair. These plants, known as "nitrogen fixers," use secretions to invite soil bacteria known as rhizobia to infect their roots cells. Fairy Berries™ How to Naturally Clean Indoor Air. Turns out that indoor air can often contain more toxins and chemicals than outdoor air. 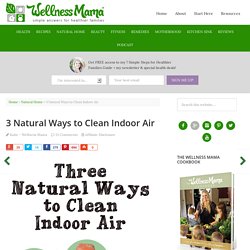 Everything from mattresses to pots/pans to kids PJs can contain harmful chemicals in indoor air. It’s best to reduce chemical exposure in any way possible, but in today’s chemical laden world, it is practically impossible to completely avoid harmful toxins. For the remaining chemicals in indoor air, there are some natural ways to help reduce your family’s exposure. Home-made Hydraulic Ram Pump. Home-made Hydraulic Ram Pump This information is provided as a service to those wanting to build their own hydraulic ram pump. 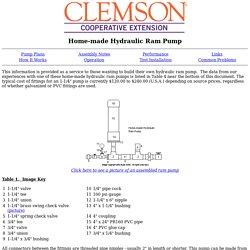 The data from our experiences with one of these home-made hydraulic ram pumps is listed in Table 4 near the bottom of this document. The typical cost of fittings for an 1-1/4" pump is currently $120.00 to $240.00 (U.S.A.) depending on source prices, regardless of whether galvanized or PVC fittings are used. Het groeidossier 7: Van angst naar hoop, een lerende samenleving. Stadslandbouw heeft positief effect op gezondheid.

Oogstkaart. Triple P slaat Circulaire Economie dood. This Revolutionary Device Turns​ Plastic Into Edible Mushrooms! A team of researchers in Europe have created a prototype device called The Fungi Mu​tarium which uses fungi to safely break down plastic and replace it with edible mushrooms. 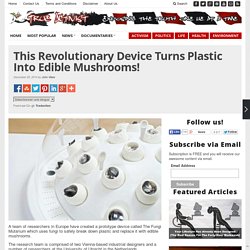 The research team is comprised of two Vienna-based industrial designers and a number of researchers at the University of Utrecht in the Netherlands. The device that they created harnesses the natural cleaning and purifying power of fungi, and creates a condition where the fungi can easily break down and absorb the trash, replacing it with more fungi.

The device has been described by some as a dome shaped incubator, which contains several pods that hold liquefied fungi sprouts. 5 Creative Ways to Feed the Hungry. It’s estimated that 48.1 million Americans lived in food-insecure households in 2014, according to Feeding America. 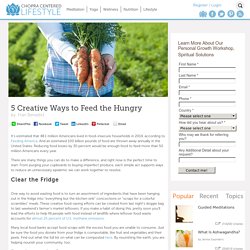 And an estimated 100 billion pounds of food are thrown away annually in the United States. Reducing food losses by 30 percent would be enough food to feed more than 50 million Americans every year. 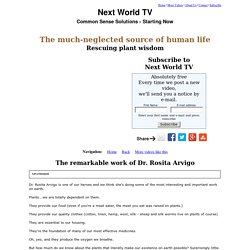 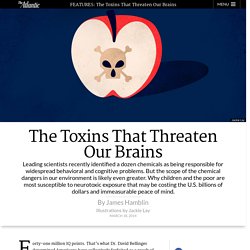 That’s what Dr. David Bellinger determined Americans have collectively forfeited as a result of exposure to lead, mercury, and organophosphate pesticides. In a 2012 paper published by the National Institutes of Health, Bellinger, a professor of neurology at Harvard Medical School, compared intelligence quotients among children whose mothers had been exposed to these neurotoxins while pregnant to those who had not.

Bellinger calculates a total loss of 16.9 million IQ points due to exposure to organophosphates, the most common pesticides used in agriculture. Last month, more research brought concerns about chemical exposure and brain health to a heightened pitch. Klimaatklappers - MilieuCentraal. Link between air pollution, increased deaths and increased deaths from heart disease affirmed. In what is believed to be the largest, most detailed study of its kind in the United States, scientists at NYU Langone Medical Center and elsewhere have confirmed that tiny chemical particles in the air we breathe are linked to an overall increase in risk of death. 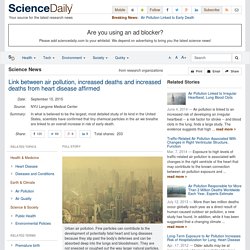 The researchers say this kind of air pollution involves particles so small they are invisible to the human eye (at less than one ten-thousandth of an inch in diameter, or no more than 2.5 micrometers across). In a report on the findings, published in the journal Environmental Health Perspectives online Sept. 15, the scientists conclude that even minuscule increases in the amount of these particles (by 10 micrograms per cubic meter of air, for example) lead to an overall increased risk of death from all causes by 3 percent -- and roughly a 10 percent increase in risk of death due to heart disease. For nonsmokers, the risk increase rises to 27 percent in cases of death due to respiratory disease. ActivistPost – Catherine J. Frompovich – Mumps And Flu Vaccine Awareness – 30 September 2013.

Recently I read an article that had me wondering what are they thinking, anyway. 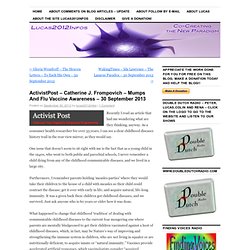 As a consumer health researcher for over 35 years, I can see a clear childhood diseases history trail in the rear view mirror, as they would say. One issue that doesn’t seem to sit right with me is the fact that as a young child in the 1940s, who went to both public and parochial schools, I never remember a child dying from any of the childhood communicable diseases, and we lived in a large city. Furthermore, I remember parents holding ‘measles parties’ where they would take their children to the house of a child with measles so their child could contract the disease; get it over with early in life; and acquire natural, life-long immunity.

It was a given back then: children got childhood diseases, and we survived. Just ask anyone who is 60 years or older how it was done. Cola’s Are Effective Pesticides — Why Indian States Are Banning Cola’s. 29 Nov. 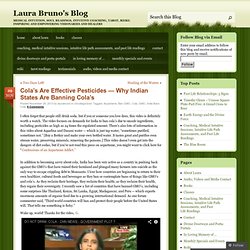 Richard Heinberg: why end of growth can mean more happiness. WiserGiving // Making Smart Philanthropy Simple. How Effective is Fair Trade? When many of us think about improving conditions in the developing world, Fair Trade may be one of the first things to come to mind. But how effective is Fair Trade? Is paying a premium to slightly increase some farmers' income the best way to tackle poverty? Could our income be spent elsewhere more effectively?

Join the Cooking Revolution. Think Free. Social Programs That Work. The Programs We’ve Identified Are Linked Below. Effective altruism critique: Few charities stand up to rational evaluation. Photo illustration by Slate. Photos by Andrei Pungovschi/AFP/Getty Images, Thinkstock. Suppose someone walks by a pond and notices a bit of garbage floating in it. A devoted environmentalist, he wades into the pond, retrieves the garbage, and throws it in a wastebasket.

How it works - Product information - Phase Change Materials - BASF Dispersions & Pigments. Frequently asked questions about phase change materials. PureTemp PCMs are available in three forms: unencapsulated, microencapsulated and macroencapsulated. Each form is suited to particular applications. The proper containment option depends on many factors. Entropy Solutions experts and encapsulation partners work with each customer to determine the optimal containment choice. Viral evolution. Viral evolution is a subfield of evolutionary biology and virology that is specifically concerned with the evolution of viruses. Many viruses, in particular RNA viruses, have short generation times and relatively high mutation rates (on the order of one point mutation or more per genome per round of replication for RNA viruses).

This elevated mutation rate, when combined with natural selection, allows viruses to quickly adapt to changes in their host environment. Viral evolution is an important aspect of the epidemiology of viral diseases such as influenza (influenza virus), AIDS (HIV), and hepatitis (e.g. HCV).