Too many Americans don't know or care about their history. If NSA surveillance program ends, phone record trove will endure. The National Security Agency will mothball its mammoth archive of Americans' telephone records, isolating the computer servers where they are stored and blocking investigators' access, but will not destroy the database if its legal authority to collect the material expires on schedule this Sunday, officials said Thursday. 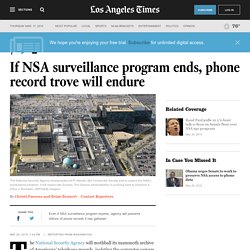 The NSA's determination to keep billions of domestic toll records for counter-terrorism and espionage investigations adds another note of uncertainty to a debate that pits the Obama administration's national security team against opponents who argue the government data trove violates Americans' privacy and civil liberties. The political and legal dispute will come to a head Sunday when the Republican-led Senate returns to work a day early to seek a resolution — hours before the law used to authorize the controversial NSA program, and several other key counter-terrorism provisions, expires at 11:59 p.m. The final eight hours — starting at 3:59 p.m. Sen. @cparsons. Drug Overdoses Propel Rise in Mortality Rates of Young Whites. Photo Drug overdoses are driving up the death rate of young white adults in the United States to levels not seen since the end of the epidemic more than two decades ago — a turn of fortune that stands in sharp contrast to falling death rates for young blacks, a New York Times analysis of death certificates has found. 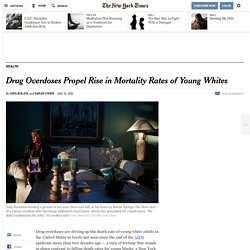 The rising death rates for those young white adults, ages 25 to 34, make them the first generation since the Vietnam War years of the mid-1960s to experience higher death rates in early adulthood than the generation that preceded it. The Times analyzed nearly 60 million death certificates collected by the Centers for Disease Control and Prevention from 1990 to 2014. It found death rates for non-Hispanic whites either rising or flattening for all the adult age groups under 65 — a trend that was particularly pronounced in women — even as medical advances sharply reduce deaths from traditional killers like heart disease.

The drug overdose numbers were stark. DEATHS FROM H.I.V. The Decline of Morality in America. Hi, I'm Bill O'Reilly. 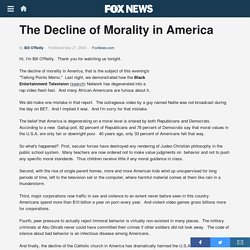 Thank you for watching us tonight. The decline of morality in America, that is the subject of this evening's "Talking Points Memo. " Last night, we demonstrated how the Black Entertainment Television (search) Network has degenerated into a rap video flesh fest. And many African-Americans are furious about it. We did make one mistake in that report. The belief that America is degenerating on a moral level is shared by both Republicans and Democrats.

So what's happened? Second, with the rise of single parent homes, more and more American kids wind up unsupervised for long periods of time, left to the television set or the computer, where harmful material comes at them like rain in a thunderstorm. Third, major corporations now traffic in sex and violence to an extent never before seen in this country. Fourth, peer pressure to actually reject immoral behavior is virtually non-existent in many places. However, there's no mass outcry about it. The Divorce Surge Is Over, but the Myth Lives On. When Gwyneth Paltrow and Chris Martin “consciously uncoupled” this year, ABC News said it was the latest example of the out-of-control divorce rate, “50 percent and climbing.” 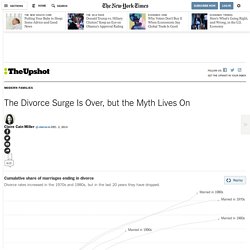 When Fox News anchors were recently lamenting high poverty levels, one of them blamed the fact that “the divorce rate is going up.” And when Bravo introduced its divorce reality show, “Untying the Knot,” this summer, an executive at the network called it “a way to look at a situation that 50 percent of married couples unfortunately end up in.” But here is the thing: It is no longer true that the divorce rate is rising, or that half of all marriages end in divorce. It has not been for some time. Even though social scientists have tried to debunk those myths, somehow the conventional wisdom has held. Despite hand-wringing about the institution of marriage, marriages in this country are stronger today than they have been in a long time. The marriage trends aren’t entirely happy ones. Photo “It’s just love now,” Mr. Sunday Dialogue: Are Americans Selfish?