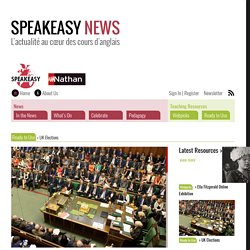 It could be part of a topic for an EPI « Information, communication, citoyenneté » on different electoral systems, differences between a monarchy and a democracy, in connection with the parcours du citoyen and EMC: L’exercice de la citoyenneté dans une démocratie (rôle du vote). See our Webpicks for further resources on the theme, and the Teacher’s Notes for suggestions for using them with this article. Vocabulary and structures: Elections, governmentCulture: United Kingdom’s electoral process and forming a governmentNumbers (dates, percentages, seats)Simple past and simple present. “I Am Not Your Negro” – Speakeasy News. In 1987, James Baldwin died without having finished his last book. 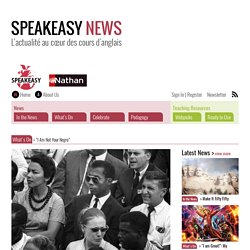 He left just thirty pages of the manuscript. The book was intended to be a personal account of the assassination of three of his friends: Medgar Evers, Malcolm X and Martin Luther King, Jr. In the documentary film I Am Not Your Negro, Raoul Peck envisions the book James Baldwin never finished. James Baldwin is one of the greatest North-American writers of the second half of the twentieth century and I Am Not Your Negro will Introduce James Baldwin to a new generation. Medieval Murder and a Sword Called Excalibur – Speakeasy News. The new film King Arthur: Legend of the Sword is a high-energy action film of one of Britain’s most enduring myths: the sword in the stone. 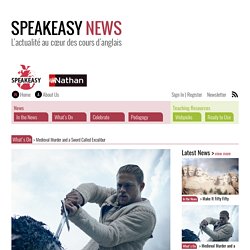 The film stars Charlie Hunnam and Jude Law as the “once and future king” and his evil uncle Voltigern, who has done his best to wipe Arthur and his family from line of succession… permanently. The young Arthur saw his parents murdered before being smuggled off to be brought up by gangsters and prostitutes on the streets of Londinium. But when Arthur’s father’s sword, Excalibur, appears from the sea embedded in a stone, Voltigern is determined to test the prophecy that says the person who can remove the sword from the stone will become king.

He orders all the young men of his kingdom to attempt the feat. To his own surprise, Arthur removes the sword. Time For Kids.