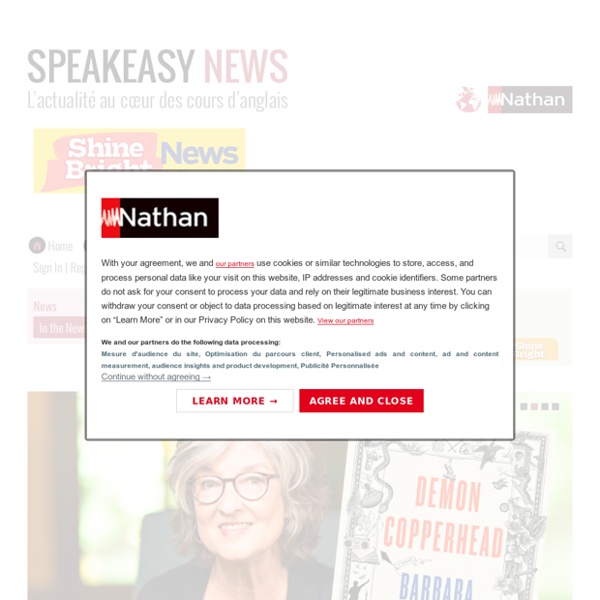 “I Am Not Your Negro” – Speakeasy News In 1987, James Baldwin died without having finished his last book. He left just thirty pages of the manuscript. The book was intended to be a personal account of the assassination of three of his friends: Medgar Evers, Malcolm X and Martin Luther King, Jr. Online mini courses – Beginners 10-lessons for low levels This is a 10-lesson mini-course to help you find different activities at your level. For each lesson there are a selection of links to different kinds of interactive exercises : UK Elections – Speakeasy News This A2-level article enables pupils to understand simply the electoral system in the United Kingdom as both the UK and France go to the polls. It could be part of a topic for an EPI « Information, communication, citoyenneté » on different electoral systems, differences between a monarchy and a democracy, in connection with the parcours du citoyen and EMC: L’exercice de la citoyenneté dans une démocratie (rôle du vote). See our Webpicks for further resources on the theme, and the Teacher’s Notes for suggestions for using them with this article.

Teacher Tap: Public Domain, Copyright Free, Open Source, and Student Use Images and Media This page provides links to some of the better copyright-free and public domain resources. The advice on this page is not a legal opinion. The ideas are intended for educators and librarians who wish to locate quality, copyright-friendly materials for educational, noncommercial, and nonprofit projects. Into Europe The system of 'imperial preference' in British trade which had been declared in the 1932 Import Duties Act continued after the Second World War. In the 1950s Britain still enjoyed strong trading connections with the Commonwealth countries, but there was much feeling that the nation's trading relationships should be more fully developed in Europe. Treaty of Rome 1957 In 1957 the Treaty of Rome established the European Economic Community which aimed to create a large European 'free trade area'.

Medieval Murder and a Sword Called Excalibur – Speakeasy News The new film King Arthur: Legend of the Sword is a high-energy action film of one of Britain’s most enduring myths: the sword in the stone. The film stars Charlie Hunnam and Jude Law as the “once and future king” and his evil uncle Voltigern, who has done his best to wipe Arthur and his family from line of succession… permanently. The young Arthur saw his parents murdered before being smuggled off to be brought up by gangsters and prostitutes on the streets of Londinium. But when Arthur’s father’s sword, Excalibur, appears from the sea embedded in a stone, Voltigern is determined to test the prophecy that says the person who can remove the sword from the stone will become king.

Culture - How the English language became such a mess You may have seen a poem by Gerard Nolst Trinité called The Chaos. It starts like this: Dearest creature in creation Christmas Below, you will find a wide range of ideas and resources to help you when you are teaching children at Christmas time. If you have any relevant resources to share, please email them and I will add them to this page. Thank you! Favourite Christmas Activities - Share your ideas for Christmas lessons and activities to use throughout the festive season. Advent Acrostic - Use this poster as a starting point for getting children to write their own acrostic poems. Contributed by Justin Stretch.