Fridays 11am class- SDG no.5 gender equality in Cambodia 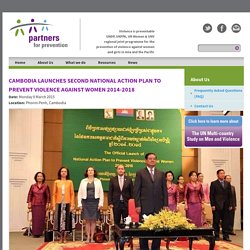 The Deputy Prime Minister and the Minister of Ministry of Interior, His Excellency Saw Kheng, officially launched the Action Plan, which sets out key strategies for government, national institutions, civil society, development partners and international organizations to work together to prevent and eliminate violence against women and provide protection to victims of violence. 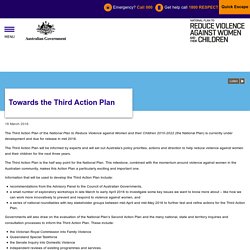 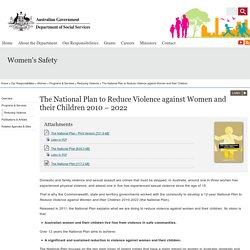 Its vision is that: In focus: Women and the Sustainable Development Goals (SDGs): SDG 5: Gender equality. Photo: UNPhoto/Sylvain Lietchti Targets End all forms of discrimination against all women and girls everywhere. 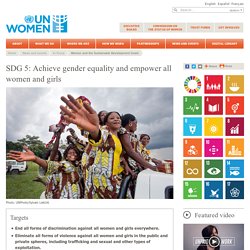 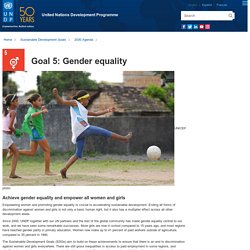 Ending all forms of discrimination against women and girls is not only a basic human right, but it also has a multiplier effect across all other development areas. Since 2000, UNDP together with our UN partners and the rest of the global community has made gender equality central to our work, and we have seen some remarkable successes. More girls are now in school compared to 15 years ago, and most regions have reached gender parity in primary education. Women now make up to 41 percent of paid workers outside of agriculture, compared to 35 percent in 1990.

The Sustainable Development Goals (SDGs) aim to build on these achievements to ensure that there is an end to discrimination against women and girls everywhere. Gender equality is one of 17 Global Goals that make up the 2030 Agenda for Sustainable Development. Girls Education, Why it matters. Here’s a message from UWS on why promoting girls’ education in communities beyond the reach of mainstream society is so vital. 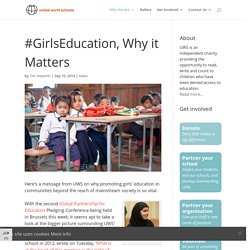 Malala Yousafzai With the second Global Partnership for Education Pledging Conference being held in Brussels this week, it seems apt to take a look at the bigger picture surrounding UWS’ work. As Malala Yousafzai, the Pakistani teenager shot by the Taliban on her way to school in 2012, wrote on Tuesday, ‘What is at the heart of this meeting is the right of all daughters and sons to receive a quality education’. UWS plays a part of a worldwide movement calling for an end to global educational inequality. Equal Access to Education for Women in Rural Cambodia - The Asia Foundation. This year marks the centennial celebration of International Women’s Day, and its theme – promoting equal access for women to education, training, and science and technology – resonates personally for Chroeung Sok Vorn, a rice farmer from Cambodia’s rural Kampong Cham province. 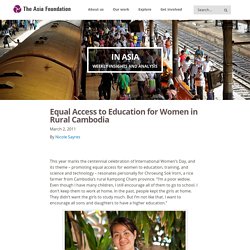 “I’m a poor widow. Even though I have many children, I still encourage all of them to go to school. I don’t keep them to work at home. In the past, people kept the girls at home. They didn’t want the girls to study much. Virenra Yang, who is 19, will be the second girl in her family to receive an educational scholarship, and is now attending Western University in Kampong Cham. Effective Literacy Programmes › Community Self-prevention Against Trafficking of Women and Children (CSPATWC) Country Profile: Cambodia Programme Overview Cambodia has made impressive progress in reconstructing its educational system which was completely destroyed during the brutal years of Khmer Rouge rule, between 1975 and 1979. 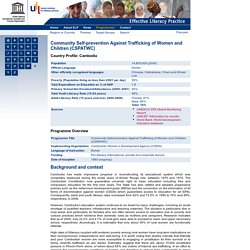 The Cambodian Constitution now guarantees universal right to basic education including free and compulsory education for the first nine years. The State has also ratified and adopted progressive policies such as the millennium development goals (MDGs) and the convention on the elimination of all forms of discrimination against women (CEDA) which guarantees access to education for all (EFA). Consequently, adult and youth literacy rates increased from 62% and 73.5% in 1990 to 76% and 99%, respectively, in 2006.

However, Cambodia’s education system continues to be beset by many challenges, including an acute shortage of qualified teachers, infrastructure and teaching materials. The CSPATWC is an intergenerational literacy and socioeconomic empowerment programme. ស្រ្តីខ្មែរ Strey Khmer. We empower women to find and raise their voices and realize their rights by providing space for dialogue, by supporting skills development, and through advocacy and livelihood support. 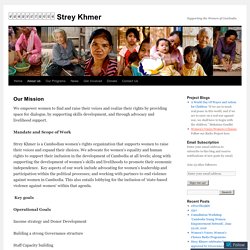 Mandate and Scope of Work Strey Khmer is a Cambodian women’s rights organization that supports women to raise their voices and expand their choices. We advocate for women’s equality and human rights to support their inclusion in the development of Cambodia at all levels; along with supporting the development of women’s skills and livelihoods to promote their economic independence. Key aspects of our work include advocating for women’s leadership and participation within the political processes; and working with partners to end violence against women in Cambodia.

This also entails lobbying for the inclusion of ‘state-based violence against women’ within that agenda. Prevention of Human Trafficking in Cambodia - Global Freedom Network. Pisey Khim Young People Against Prostitution and Human Trafficking: The Greatest Violence Against Human Beings Casina Pio IV Vatican City, 15-16 November 2014 Cambodia located in Southeast Asia, with a population of over 15.1 million. 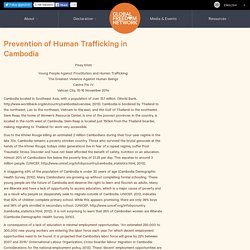 (World Bank, 2013). Cambodia is bordered by Thailand to the northwest, Lao to the northeast, Vietnam to the east, and the Gulf of Thailand to the southwest. Siem Reap, the home of Women’s Resource Center, is one of the poorest provinces in the country, is located in the north west of Cambodia. Due to the Khmer Rouge killing an estimated 2 million Cambodians during their four-year regime in the late 70s, Cambodia remains a poverty stricken country. Social Institutions and Gender Index (SIGI) AUSAID, ‘Research Policy Brief Triple Jeopardy: Violence against women with disabilities in Cambodia’, Australian Government, (last accessed 15 November 2013). Cambodian Civil Code (2007), No. NS/RKM/1207/030 dated 8 December 2007, (in Khmer). Cambodian Human Rights and Development Association (2013) ‘Issues of Women’s Rights, Child Rights and Migrant Workers’ Rights in Cambodia’, Cambodian Human Rights and Development Association, 09 Aug. 2013.

The Ottawa Charter for Health Promotion. Statistics. Please note that the data for all countries is in the process of being updated. For the most recent data (including 2013 data), download the State of The World's Children 2015 Country Statistical tables [Excel] and choose a country. You can also download all data tables by thematic area [PDF]. Basic Indicators | Nutrition | Health | HIV/AIDS | Education | Demographic Indicators | Economic Indicators | Women | Child Protection | The Rate Of Progress | Adolescents | Disparities By Residence | Disparities By Household Wealth | Early Childhood Development. Domestic Violence in Cambodia Has to Be Tackled By Law - The Cambodia Daily. By Dr. Katherine Brickell Sadly, domestic violence against women is one of the nation’s most prevalent human rights abuses.

The U.N.’s Multi-country Study on Men and Violence in Asia and the Pacific found that 12 percent of 1,812 Cambodian men in the survey reported committing physical violence against women. About 21 percent of those who had been in a relationship said they had raped a partner. Neary Rattanak 4 Violence against Women and Girls Eng. UNDP in Cambodia. Introduction Girl students in a rural secondary school ride their bicycle back home. (Photo: UNDP Cambodia) The Kingdom of Cambodia is situated in the southwest of the Indochinese peninsular and has a rich culture that dates back 2,000 years ago. The country has a land area of 181,035 square kilometres and population of 15.2 million people (2014). Like in the rest of Southeast Asia, Cambodia’s climate is characterized by two main seasons: the monsoon, which brings rain from mid-May to October, and dry season from November to April. History.

Problem loading page. Domestic Violence in Cambodia. Phnom Penh – There is a proverb in Cambodia, “Men are gold and women are fabric.” Women who lose their virginity before meeting their husband are considered used fabric, smudged and broken. In contrast, men – irrespective of their chastity, and whether they are single or married – remain gold. It is a belief that is inculcated in women from childhood through Chbab Srey, a rhythmic poem that acts as an unofficial law of silence for them. Kraen, 43, endured daily beatings from an alcoholic husband. She never reported them, even when left with wounds to her head. Kraen’s passive attitude is part of the legacy of Chbab Srey, which until 2007 was part of the school curriculum: Be respectful to your husband. Enjoying this article? Gender Policy and Women’s Political Empowerment in Cambodia. CAMBODIA: 'Getting Decent Jobs for Women – The Challenge' Asia-Pacific, Development & Aid, Economy & Trade, Gender, Headlines, Human Rights, Labour, Poverty & SDGs Andrew Nette.

Using technology to counter gender-based violence in Cambodia. In a bare concrete room, down a pungent hallway on the outskirts of Cambodia's capital Phnom Penh, Sreyleap* sits on the tiled floor, sipping iced coffee from a red thermos. Though it's mid-day, the puffy-eyed 25-year-old has just awoken, weary from another night of work that requires her to drink copious amounts of alcohol and endure groping from unfamiliar men, in exchange for meagre tips. As a karaoke bar employee, Sreyleap witnesses or experiences sexual assaults on a near-nightly basis. Cambodia Women's Crisis Center. Problem loading page.

UNFPA steps-up the SDG localization in Cambodia. The seventeen sustainable development goals adopted at the United Nations General Assembly in New York last year, September 2015, aim to make a better world over the next 15 years. A number of goals were agreed by the world leaders which provide a pathway to reinforce commitments and prepare actions toward ending poverty and stabilizing peace on the planet. Placing importance on the global commitments and responsibilities at country level, the Ministry of Planning has taken the lead in reviewing and discussing the foregoing agenda with relevant ministries, using the existing national technical working group mechanism. In stepping up this critical momentum and realizing the connection between SDGs and people, UNFPA has strongly supported the localization process of SDG into the Cambodia’s priorities.

You will receive a confirmation email from the Agency shortly. You are already registered to attend this event, please contact the Agency for more information. Thank you for registering for this event. You have been successfully enrolled. You have been successfully unenrolled. Problem loading page. A fellow's perspective: gender inequality in Cambodia. Aycc 1105 Keasa%20Khun. Face the facts: Gender Equality. Back to main Face the Facts page. United Nations: Gender equality and women's empowerment. Sustainable development goals - United Nations.