Concerns zipline will affect rare Otago shag. 9 Zipline Mistakes You Don’t Know You’re Making - Skywalker - Adventure Builders. The purpose of this white paper is to identify the nine most common mistakes seen on zip lines and eliminate them. 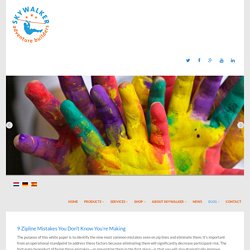 It’s important from an operational standpoint to address these factors because eliminating them will significantly decrease participant risk. The Physics of Roller Coasters. Energy Transformation on a Roller Coaster. A roller coaster ride is a thrilling experience which involves a wealth of physics. 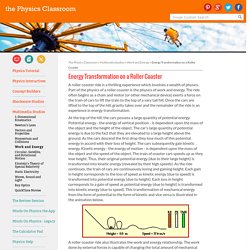 Part of the physics of a roller coaster is the physics of work and energy. A Brief History of the Roller Coaster. New study finds zipline-related injuries are rapidly increasing. The popularity of ziplining has skyrocketed rapidly in recent years. 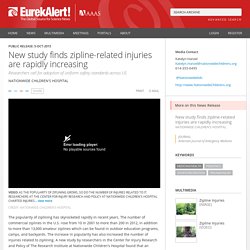 The number of commercial ziplines in the U.S. rose from 10 in 2001 to more than 200 in 2012, in addition to more than 13,000 amateur ziplines which can be found in outdoor education programs, camps, and backyards. The increase in popularity has also increased the number of injuries related to ziplining. A new study by researchers in the Center for Injury Research and Policy of The Research Institute at Nationwide Children's Hospital found that an estimated 16,850 non-fatal zipline-related injuries were treated in U.S. emergency departments from 1997 through 2012. Almost 70 percent of the injuries occurred during the last four years of the study period, indicating a growing problem. In 2012 alone, there were more than 3,600 people treated in U.S. emergency departments for zipline-related injuries, nearly 10 per day. The World’s Steepest Zip Line Is Coming to St. Martin. Boeing Is Using Zip Lines as Emergency Escape From Their Crewed Spacecraft. 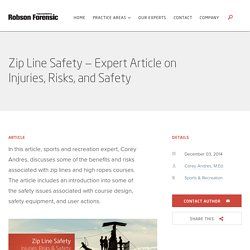 The article includes an introduction into some of the safety issues associated with course design, safety equipment, and user actions. Zip Line Safety. Safety - Ecozip. Just how dangerous are ziplines? Coaster101 - Roller coaster and theme park photos, news, reviews, videos, articles and more. Roller Coaster Safety Features. As early as the 15th century, Russians were using nature as their roller coaster; carving as large as 70-foot slides and sleds out of the frozen terrain. 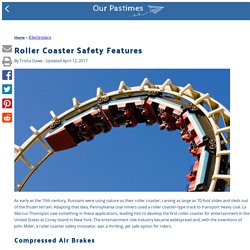 Adapting that idea, Pennsylvania coal miners used a roller coaster-type track to transport heavy coal. La Marcus Thomspon saw something in these applications, leading him to develop the first roller coaster for entertainment in the United States at Coney Island in New York. The entertainment ride industry became widespread and, with the inventions of John Miller, a roller coaster safety innovator, was a thrilling, yet safe option for riders. Roller coaster. Science of rollercoasters. By Chris Woodford. 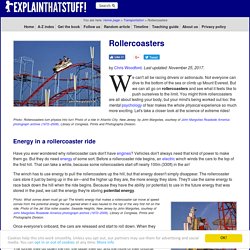 Last updated: November 25, 2017. We can't all be racing drivers or astronauts. Not everyone can dive to the bottom of the sea or climb up Mount Everest. But we can all go on rollercoasters and see what it feels like to push ourselves to the limit. You might think rollercoasters are all about testing your body, but your mind's being worked out too: the mentalpsychology of fear makes the whole physical experience so much more exciting. Photo: Rollercoasters turn physics into fun! Energy in a rollercoaster ride. Roller Coaster Science: Thrills, Chills, and Physics.

The first roller coaster at Coney Island, which opened in June 1884, would barely rate in the kiddie section of a modern-day amusement park. The “Switchback Railway” trundled along at just six miles per hour over a series of gentle hills. Nowadays, roller coasters can put you through loop-de-loops, send you screaming up 38 stories to momentarily rise up free of gravity, and even hang you from a shoulder harness, limbs a-dangle, shooting through corkscrews and switchbacks and cobra turns, with your life in the hands of engineering.

Arguably, no other leisure activity makes physics quite so visceral as the roller coaster. Here’s a quick breakdown of the forces that cause your stomach to drop—and keep you in your seat. Climbing the Hill (There are actually other types of potential energy, too. When the roller coaster starts flying down the hill, it gains kinetic energy and loses potential energy. How Roller Coasters Work. If you enjoy studying physics (and who doesn't), there are few more exhilarating classrooms than roller coasters. 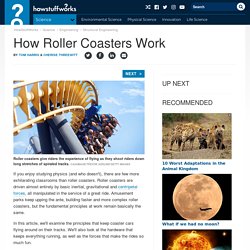 Roller coasters are driven almost entirely by basic inertial, gravitational and centripetal forces, all manipulated in the service of a great ride. Amusement parks keep upping the ante, building faster and more complex roller coasters, but the fundamental principles at work remain basically the same.

ZIPLINE PHYSICS. Physics of Zip Lines - How Zip Lines Work. Unlike multiple universes or string theory, the physics of zip lines is actually pretty intuitive, if you understand some basic principles. 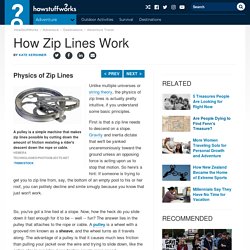 First is that a zip line needs to descend on a slope. Gravity and inertia dictate that we'll be yanked unceremoniously toward the ground unless an opposing force is acting upon us to stop that motion. Zipline Physics: What Goes into Planning Your Thrill Ride? When planning a professional zipline course, many factors are considered to create a safe, yet thrilling experience. 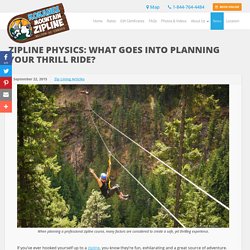 If you’ve ever hooked yourself up to a zipline, you know they’re fun, exhilarating and a great source of adventure. Tourist breaks back on Sentosa ride. An Australian tourist suffered a fall and broke his back in a possible ride malfunction while on a flying fox ride in Sentosa last Sunday. 38-year-old Michael McCarthy was concluding his turn on the MegaZip flying fox adventure ride alongside his wife when he realised he was approaching the landing platform at a much greater speed than her. 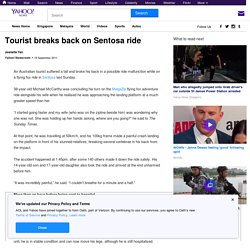 Flying fox death: 'He should not have been on it' Dreamworld tragedy: The worst theme park disasters in history. Passengers on stuck Rainbow's End rollercoaster describe terror. Theme park stays shut after tragedy (+photos) Rainbow's End in South Auckland is expected to remain closed today after the death of a 21-year-old worker at the theme park. Michael Ross Stuart of Papakura died yesterday after he became trapped in one of the park's rides shortly before the usual opening time of 10am.

The park did not open and posted notices at its front gates saying this was because of "unforeseen circumstances". The police and the Occupational Safety and Health Service have begun investigations.