Hattie effect size list - 256 Influences Related To Achievement  John Hattie developed a way of synthesizing various influences in different meta-analyses according to their effect size (Cohen’s d). In his ground-breaking study “Visible Learning” he ranked 138 influences that are related to learning outcomes from very positive effects to very negative effects. Hattie found that the average effect size of all the interventions he studied was 0.40. Therefore he decided to judge the success of influences relative to this ‘hinge point’, in order to find an answer to the question “What works best in education?”

Originally, Hattie studied six areas that contribute to learning: the student, the home, the school, the curricula, the teacher, and teaching and learning approaches. (The updated list also includes the classroom.) Home - Teach Like a Champion. Behaviour: Are we putting the pupils' needs first? I drove past the school recently where I was deputy headteacher a few years back and I got an instant flashback. 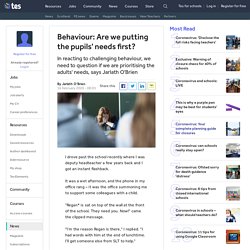 It was a wet afternoon, and the phone in my office rang – it was the office summoning me to support some colleagues with a child. "Regan* is sat on top of the wall at the front of the school. They need you. Now! " came the clipped message. 5 ways tactically ignoring bad behaviour can help. In my NQT year I had a pupil who would shout “BORING” at the top of his voice whenever I was demonstrating a skill I wanted the class to practise. 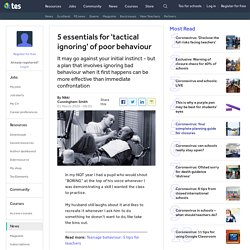 My husband still laughs about it and likes to recreate it whenever I ask him to do something he doesn’t want to do, like take the bins out. Read more: Teenage behaviour: 5 tips for teachers From the magazine: How a SEND diagnosis affects teachers’ judgement Listen: John Hattie defends Visible Learning. Behaviour for learning. SEND: How to teach autistic pupils...by autistic pupils. During my PhD research, autistic young people told me that mainstream education was a place they came to dread. 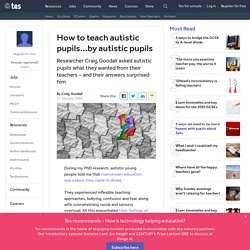 They experienced inflexible teaching approaches, bullying, confusion and fear, along with overwhelming social and sensory overload. All this exacerbated their feelings of exclusion and otherness. Meeting pupils' needs: Why we need to see children as individuals, not labels Autism: Rather than more training, the answer is representation Vocabulary: Why all teachers need to use the same terms for autism On average, autistic children have lower attainment and higher exclusion rates than their non-autistic peers. So, the importance of developing an education system that supports autistic young people and allows them to thrive cannot be underestimated.

Voices of autistic pupils. Mental health: managing the behaviour of pupils with SEMH issues. “They’re the naughty ones.” 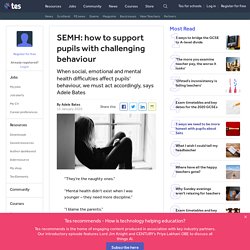 “Mental health didn’t exist when I was younger – they need more discipline.” “I blame the parents.” These and other non-helpful thoughts can sometimes be voiced about our pupils with social, emotional and mental health (SEMH) issues. EEF Improving behaviour in schools Report. How to use attachment theory in schools. Due to a mix of necessity – with funding issues restricting access to external services – and an increasing interest in what drives certain behaviours, schools are now more trauma-aware than they have ever been before. 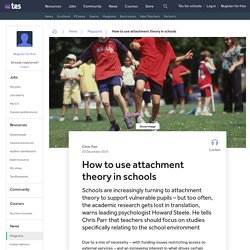 As a result, teachers have become accustomed to delving into research to help their most vulnerable pupils, putting into action interventions from multiple disciplines, often with positive effects. However, not everything is translating from the theory to the classroom as smoothly as it perhaps could. And one of the areas that often causes confusion is attachment theory. The British psychologist John Bowlby, widely acknowledged as the first attachment theorist, conducted his research in the mid 20th century and defined attachment as “lasting psychological connectedness between human beings”. Self-harming: How teachers can help students at risk. As a teenager, I started cutting myself. 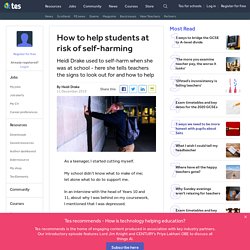 My school didn’t know what to make of me; let alone what to do to support me. In an interview with the head of Years 10 and 11, about why I was behind on my coursework, I mentioned that I was depressed. Quick read: 4 things teachers need to know about attachment theory Quick listen: Why we need more support for mental health in primary. 'A neat book doesn't mean effective learning' Almost every class has one. 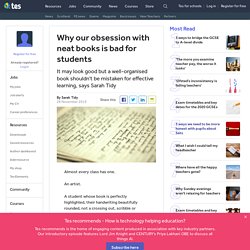 An artist. A student whose book is perfectly highlighted, their handwriting beautifully rounded, not a crossing out, scribble or doodle in sight. Ban doodling? Ask yourself these four questions first. I once taught a difficult Year 11 boy. 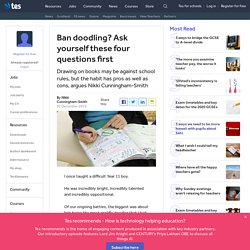 He was incredibly bright, incredibly talented and incredibly oppositional. Of our ongoing battles, the biggest was about him being the most prolific doodler that I had ever (and have ever) come across. The Secret Supply Teacher: Fights, IT fails, no support. Attachment theory: what teachers need to know. Attachment theory was created in the mid-20th century by the British psychologist John Bowlby. 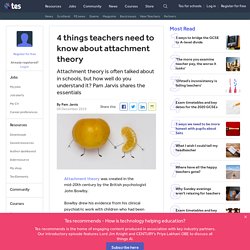 Bowlby drew his evidence from his clinical psychiatric work with children who had been evacuated from the cities during the Second World War. 'Strictest school' Michaela gets top marks from Pisa chief. A secondary dubbed the UK's "strictest school" has been given a glowing report from the man in charge of the Pisa international education rankings. 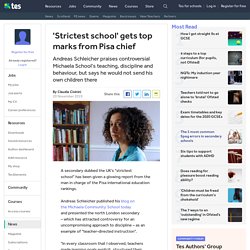 Andreas Schleicher published his blog on the Michaela Community School today and presented the north London secondary – which has attracted controversy for an uncompromising approach to discipline – as an example of "teacher-directed instruction". "In every classroom that I observed, teachers made learning goals explicit, structured their lessons clearly and asked engaging questions that stimulated higher-order thinking," the Organisation for Economic Cooperation and Development official behind the Programme for International Student Assessment wrote. True-grit-maybe-teaching-zest-best?j=13987769&e=gbgeorgie@hotmail. You have heard of grit. How to give perfect praise to pupils. Last year, I spent weeks supporting a somewhat challenging student to craft a speech for his English language GCSE. Playtime: So much learning takes place in the playground.

Ah, the humble playground. All schools have one, and largely they are all ignored. And yet, within its boundaries, children learn so much. They learn skills that stay with them for ever, taught largely through osmosis from other children. Teamwork, leadership, inclusivity, positive reinforcement, honesty and even bullying are skills learned on a daily basis. Why teachers should let students use their first name. The very first time I came into conflict with senior leadership (it wouldn’t be the last) was when I asked my new deputy head if it would be alright to have the sixth-form students call me by my first name. It would break down the unnecessary barriers to learning and foster a warm, collaborative climate, I argued with all the enthusiasm of a teacher in their first year of the job.