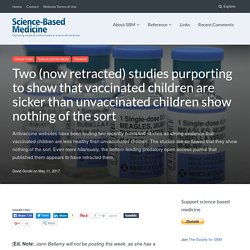 Note: Jann Bellamy will not be posting this week, as she has a personal family matter to deal with. She should return in two weeks. Fortunately I can fill in and tell a story that should also be told on SBM.] There is a kind of study that often draws my attention because it just keeps showing up again and again and again. I call such studies, appropriately enough, zombie studies. Inoculating – Against Misinformation – Science-Based Medicine.

This is perhaps the most “meta” post I have written for SBM. 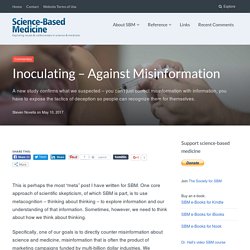 Problem loading page. Cassini’s Grand Finale: A Dive Between Saturn and Its Rings - NYTimes.com. When Cassini was launched in 1997, President Bill Clinton was being investigated for making fund-raising calls from the White House and the internet was in its infancy. 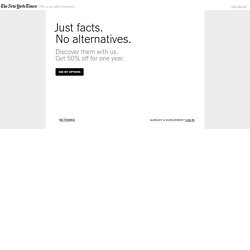 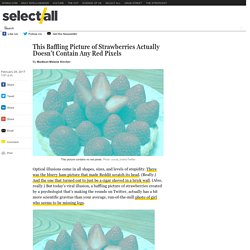 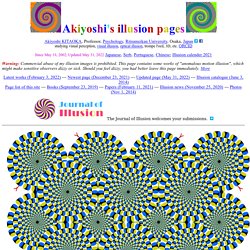 Does Earth have a shadow biosphere? The Feynman Lectures on Physics Vol. I Ch. 2: Basic Physics. 2–1Introduction In this chapter, we shall examine the most fundamental ideas that we have about physics—the nature of things as we see them at the present time. 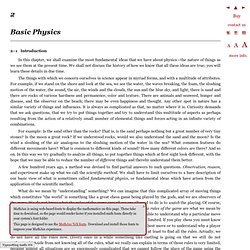 We shall not discuss the history of how we know that all these ideas are true; you will learn these details in due time. Scientists discover light could exist in a previously unknown form. New research suggests that it is possible to create a new form of light by binding light to a single electron, combining the properties of both. 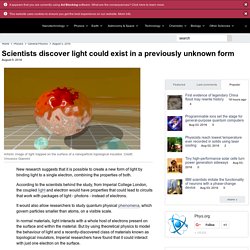 According to the scientists behind the study, from Imperial College London, the coupled light and electron would have properties that could lead to circuits that work with packages of light - photons - instead of electrons. It would also allow researchers to study quantum physical phenomena, which govern particles smaller than atoms, on a visible scale. In normal materials, light interacts with a whole host of electrons present on the surface and within the material. But by using theoretical physics to model the behaviour of light and a recently-discovered class of materials known as topological insulators, Imperial researchers have found that it could interact with just one electron on the surface. Dying Stars May Transform Frozen Worlds Into Havens for Life. When most stars reach old age and begin to run out fuel, they swell up to hundreds of times their normal size, engulfing planets that orbit too close. 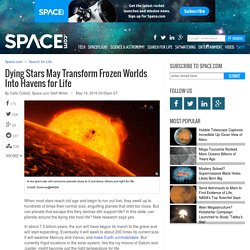 But can planets that escape this fiery demise still support life? In this state, can planets around the dying star host life? Physics First: Scientists Create Maxwell's Demon In Photonic Circuit. Physicists from the University of Oxford published their study in a recent issue of Physical Review Letters stating that they believe they have found the first photonic implementation of Maxwell’s demon. 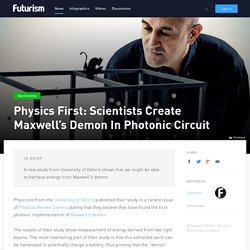 The results of their study show measurement of energy derived from two light beams. The most interesting part of their study is that this extracted work can be harnessed to potentially charge a battery, thus proving that the “demon” exists. Water ice found on the surface of comet 67P. For the first time, scientists have spotted large patches of water ice on the surface of a comet, thanks to instruments aboard the European Space Agency's Rosetta orbiter. 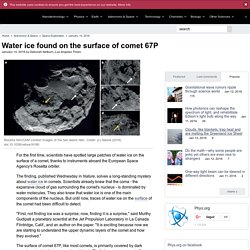 The finding, published Wednesday in Nature, solves a long-standing mystery about water ice in comets. Scientists already knew that the coma - the expansive cloud of gas surrounding the comet's nucleus - is dominated by water molecules. They also knew that water ice is one of the main components of the nucleus. But until now, traces of water ice on the surface of the comet had been difficult to detect. "First, not finding ice was a surprise; now, finding it is a surprise," said Murthy Gudipati a planetary scientist at the Jet Propulsion Laboratory in La Canada Flintridge, Calif., and an author on the paper. The surface of comet 67P, like most comets, is primarily covered by dark organic materials that appear almost black.

The Fantastically Strange Origin of Most Coal on Earth – Phenomena: Curiously Krulwich. This is a story about trees—very, very strange looking trees—and some microbes that failed to show up on time. Their non-appearance happened more than 300 million years ago, and what they didn’t do, or rather what happened because they weren’t there, shapes your life and mine.

All you have to do is walk the streets of Beijing or New Delhi or Mexico City: If there’s a smog-laden sky (and there usually is), all that dust blotting out the sun is there because of this story I’m going to tell. It begins, appropriately enough, in an ancient forest … … whose trees “would appear fantastic to us in their strangeness,” write Peter Ward and Joseph Kirschvink in their book A New History of Life. Some of them were giants: 160 feet tall, with delicate fernlike leaves that sat on top of pencil-thin trunks. These trees weren’t just odd looking. Teenager Wins $400,000 For His Video Explaining Einstein's Theory of Relativity. Still baffled by Einstein’s theory of relativity, or even the parts in the movie Interstellar when everyone experiences time differently? Well, this teenager’s explanation of special relativity even gives Carl Sagan a run for his money.

Koko the sign-language speaking gorilla has adopted two kittens. Koko, the gorilla famous for her ability to communicate using sign language, now has the family she always wanted. Now We Know What Causes Tinnitus, That Never-Ending Ringing In Your Ears. Chronic pain and tinnitus, the incessant ear ringing that affects up to 30 percent of the adult population, may share a common source, new research shows. The finding may bring millions of people who suffer from both conditions a step closer to finding relief. A study published in Trends in Cognitive Sciences found the “phantom pain” in both disorders often begins as a response to an injury, but continues when a faulty “circuit breaker" in the brain is unable to properly process the pain or noise. Vast Cosmic Voids Merge Like Soap Bubbles. Vast regions of near-empty space in the Universe are growing and shrinking, much as bubbles merge and separate in soapsuds, astronomers have discovered.

Imagine this : perhaps the most important street photographer of the twentieth century was a nanny who kept everything to herself. Nobody had ever seen her work and she was a complete unknown until the time of her death. #AIjeylukR3mtqhVI. The famous sunspots on the surface of the Earth’s star result from the dynamics of strong magnetic fields, and their numbers are an important indicator of the state of activity on the Sun. Neuronal "Superhub" Might Generate Consciousness. Ants Swarm Like Brains Think - Issue 23: Dominoes. If you remember this story, another memory will die off. Three Seconds: Poems, Cubes and the Brain. Earth - Why is there something rather than nothing? Chimpanzees in west Africa observed indulging in habitual drinking.

Ex Machina and AI. Untitled. Your Memory is like the Telephone Game: Northwestern University News. Steven Pinker Language Interview With Jesse Singal. Sociological Images. Michael Ruse – Life of Gaia. Researchers build pattern-recognition model that acts like a human. DNA Can Survive Reentry from Space. The ultimate comeback: Bringing the dead back to life. The Challenges and Threats of Automated Lip Reading. New Quantum Theory Could Explain the Flow of Time.

Virtual afterlives will transform humanity – Michael Graziano. Why it's time to lay the selfish gene to rest – David Dobbs. Simulations back up theory that Universe is a hologram. This Computer System Gets Smarter Just by Surfing the Web. Hallucinogens Have Doctors Tuning In Again. (3) Facebook. One for the history books: Stunning Saturn mosaic captured last week by Cassini. Physicists Discover Geometry Underlying Particle Physics.