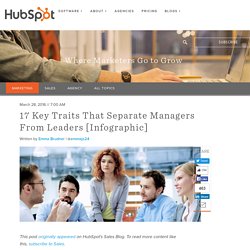 To read more content like this, subscribe to Sales. In the words of Grace Hopper: "You manage things. You lead people. " The difference between managing and leading might seem fuzzy to managers, but it's crystal clear to their direct reports. Think about it: Would you rather be told what to do, or sold on a vision? Would you prefer to work for someone who rules with an iron fist and attempts to control your every move, or someone who empowers you to make decisions and encourages experimentation?

Even if your title is "manager," it behooves you to learn and apply the principles of leadership to your day-to-day. How to Create Content That Earns Engagement, Trust, and Loyalty for Your Brand. [Estimated read time: 17 minutes] A couple of years back, I received a call from the CMO of a small but popular and growing startup about taking on the brand as a content strategist. 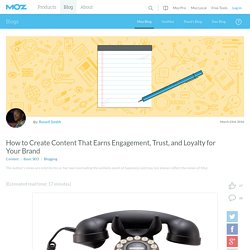 While I was initially lukewarm to the idea, they were adamant about working together, feeling that I “could help them reach their goals.” Before hanging up the phone, I asked him to email me the main priority for the onsite content: "Engaging content (e.g., shares, likes, tweets, etc.) ," she wrote.

I thought, I can do engaging. I reasoned I’d stick with how-to information content, in-depth evergreen content, and maybe a few interviews. But not long after I started working with the brand, I saw some problems that should have been red flags from the beginning: I was confused. Is there EVER a scenario where increased conversions was a negative? Shortly thereafter, the relationship dissolved. Engagement, alone, is a poor choice for a goal This likely sounds familiar to folks reading this post.

Why do you think that is? How to Create Content That Earns Engagement, Trust, and Loyalty for Your Brand. 7 Major Fears All Successful People Must Overcome. If you want to succeed live in life, you must overcome your biggest fears. 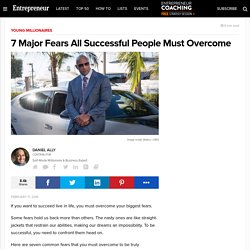 Some fears hold us back more than others. The nasty ones are like straight-jackets that restrain our abilities, making our dreams an impossibility. To be successful, you need to confront them head on. Here are seven common fears that you must overcome to be truly successful. 1. Many people are afraid to live their dreams for fear of what others may think and say about them.

This is a common theme from many people. 2. Many people are stuck in “survival mode.” "I'm 26 years old and I'm trapped in a cubicle for 40 hours a week,” a man recently wrote me. Related: 7 Major Steps for Achieving Massive Success The fear of poverty is crippling. 3. There's a certain age where many people quit at life. Fear of old age can also be harmful when a person has to go through a major career transition. In the end, however, age is far less important than your belief in yourself. There are many different components that need to come together to create a successful business. 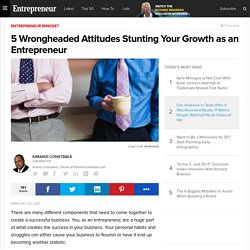 You, as an entrepreneur, are a huge part of what creates the success in your business. Your personal habits and struggles can either cause your business to flourish or have it end up becoming another statistic. Each of us will always deal with struggles in our lives, but there are five common struggles you can overcome to become a better entrepreneur. It won’t happen overnight, but with awareness and a willingness to do the hard work; you can stop giving into the struggles that keep your business from explosive growth. 1.

It’s natural to want to react in the moment, but it’s rarely smart. When you are faced with a situation where you feel your blood rising, stop. Related: Don't Get Stupid, Use Your Anger for Good 2. None of us ever want to be wrong, but that’s impossible in life. 3. There is a lot of bad advice that you receive as an entrepreneur. Kenia’s Acrylic Nails Page. 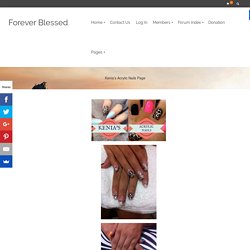 From Leonardo DiCaprio's big Best Actor win to Alejandro Iñárritu's award for Best Director, here are some of the most memorable lines from tonight's Oscars acceptance speeches. 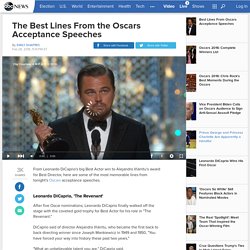 Leonardo DiCaprio, 'The Revenant' After five Oscar nominations, Leonardo DiCaprio finally walked off the stage with the coveted gold trophy for Best Actor for his role in "The Revenant. " DiCaprio said of director Alejandro Iñárritu, who became the first back to back directing winner since Joseph Mankiewicz in 1949 and 1950, "You have forced your way into history these past two years.

" "What an unbelievable talent you are," DiCaprio said. He thanked those who helped him at every stage in his career, including director Martin Scorsese for "teaching me so much about the cinematic form. " DiCaprio also thanked his parents: "none of this would be possible without you," he said. DiCaprio then connected his film to climate change. "It is the most urgent threat facing our entire species," he said.