Our Best Recipes and Tips for Coronavirus Quarantine Cooking. Portuguese Jobs in Canada 【 Now Hiring 】 Job Listings. Cooking my way through my favourite books & games! Directory – Fandom Foodies. The Geeky Chef. From the Monkey Island video games Not only does this alcoholic beverage appear a great deal in the Monkey Island games, it is considered the #1 drink of swashbuckling pirates everywhere. 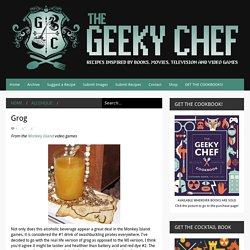 I've decided to go with the real life version of grog as opposed to the MI version, I think you'd agree it might be tastier and healthier than battery acid and red dye #2. The word grog refers to a variety of alcoholic beverages and originally referred to a drink made with water and rum, which was introduced into the Royal Navy by British Vice Admiral Edward Vernon. While many claim to make a traditional Navy grog recipe, there are only several accepted forms. The Royal Navy's grog recipe includes lemon juice, water, rum, and cinnamon. Ingredients: 2 c. light rum 2 c. water (traditionally sea water, but I can't advise that) 1 c. grapefruit juice 1 c. orange juice 1 c. pineapple juice ½ c. honey or to taste 1 tbs. cinnamon or to taste Sea salt (optional) to taste Green Food Dye (optional) The Geeky Chef. From Alice's Adventures in Wonderland by Lewis Carrol There were a few chapters in Alice in Wonderland dedicated to these simple pastries. 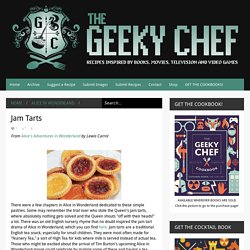 Some may remember the trial over who stole the Queen's jam tarts, where absolutely nothing gets solved and the Queen shouts "off with their heads! " a lot. There was an old English nursery rhyme that no doubt inspired the jam tart drama of Alice in Wonderland, which you can find here. Jam tarts are a traditional English tea snack, especially for small children. Ingredients 1 ¾ c. flour ¾ c. butter , chilled and diced. The Geeky Chef. From the Battlestar Galactica television show Well, today is New Years Eve and I'm sure many of you toasters are going to consuming alcohol tonight, so why not do it Battlestar style? 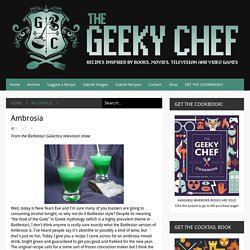 Despite its meaning "the food of the Gods" in Greek mythology (which is a highly prevalent theme in Battlestar), I don't think anyone is really sure exactly what the Battlestar version of Ambrosia is. I've heard people say it's absinthe or possibly a kind of wine, but that's just no fun. Today I give you a recipe I came across for an ambrosia mixed drink, bright green and guaranteed to get you good and frakked for the new year. Pan Galactic Gargle Blaster. From The Hitchhiker's Guide to the Galaxy by Douglas Adams I did you all a favor and found this cocktail somewhere else besides my puny human brain. 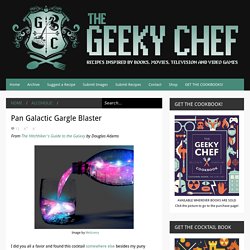 It probably helps to have two heads when inventing cocktails... The Geeky Chef. Captains Log, Stardate 20100101.17: The Enterprise was attacked by a Romulan starship, the motivations behind the attack are unknown to me or my crew. 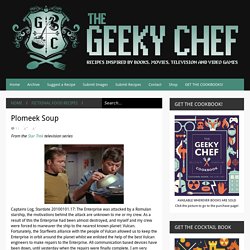 As a result of this the Enterprise had been almost destroyed, and myself and my crew were forced to maneuver the ship to the nearest known planet: Vulcan. Fortunately, the Starfleets alliance with the people of Vulcan allowed us to keep the Enterprise in orbit around the planet whilst we enlisted the help of the best Vulcan engineers to make repairs to the Enterprise. All communication based devices have been down, until yesterday when the repairs were finally complete. I am very perturbed by the years worth of data missing from my Log, and hope to make up for it in the weeks to come. We have spent over a year stranded on the planet Vulcan and I have some to learn many things about Vulcan culture and traditions.

Submission: Beorn's Honey Cake. From The Hobbit by J.R.R. 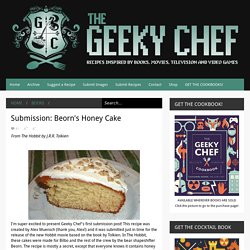 Tolkien I'm super excited to present Geeky Chef's first submission post! This recipe was created by Alex Muensch (thank you, Alex!) The Geeky Chef. From A Song of Ice and Fire by George R. 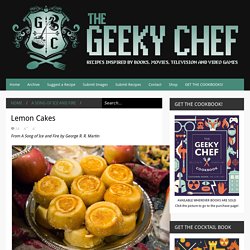 R. Martin George R. R. Martin's epic fantasy series A Song of Ice and Fire is notorious not only for its graphic violence and political intrigue but also for its loving and lengthy descriptions of food, with passages spanning several pages to describe one meal... Barbecued Buzzard Wings. From the World of Warcraft online game Ah, questing in the Badlands. 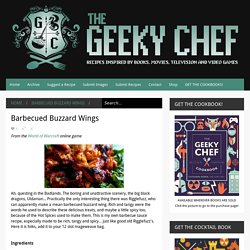 The boring and unattractive scenery, the big black dragons, Uldaman... Practically the only interesting thing there was Rigglefuzz, who can apparently make a mean barbecued buzzard wing. Rich and tangy were the words he used to describe these delicious treats, and maybe a little spicy too, because of the Hot Spices used to make them. This is my own barbecue sauce recipe, especially made to be rich, tangy and spicy... just like good old Rigglefuzz's. Ingredients 1/2 cup fresh lemon juice. Nuka Cola Quantum. From the Fallout 3 and New Vegas video games Here's an oft requested video game soft drink for you, my beloved readers: Nuka Cola Quantum from Fallout 3. 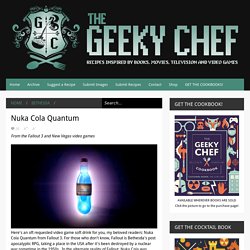 For those who don't know, Fallout is Bethesda's post apocalyptic RPG, taking a place in the USA after it's been destroyed by a nuclear war sometime in the 1950s. In the alternate reality of Fallout, Nuka Cola was invented in 2044 and quickly became the most popular soft drink in the world. Crunchy Spider Surprise. From the World of Warcraft MMORPG I apologize for my recent lack of entries, my fiance got us an XBox 360, and... you can guess. 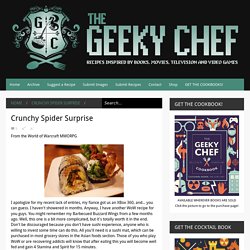 I haven't showered in months. Anyway, I have another WoW recipe for you guys. You might remember my Barbecued Buzzard Wings from a few months ago. Well, this one is a bit more complicated, but it's totally worth it in the end. Ingredients. The Geeky Chef. From the Portal video game So I guess I'm a little late to the party with this one, but as I was finally beating Portal last night I realized that this was just so obvious and mandatory for a collection like mine. I had to take action. You can find other versions of the cake pretty much everywhere (floating around on the web with labels like "the cake is not a lie!)

But I wanted to make mine the most accurate and tasty. I'm sure most of you nerdy types, and even some of you fabled "cool people" have seen the phrase "the cake is a lie" on t-shirts and in your social networking stratosphere and pretty much everywhere else. Ingredients. Murloco Taco Supreme. From the World of Warcraft MMORPG Today I have for you the recipe for the best "fish" tacos in Azeroth. We've all seen the amusing and somewhat perplexing t-shirts . In the super popular MMORPG, World of Warcraft, Murlocs are a race of humanoid hut-dwelling amphibious fish creatures. Known for the annoying sound they make, their less than attractive appearance, their ability to come out of nowhere to gang up on you, and their talent of running away and alerting the whole freaking tribe of your presence... The Geeky Chef. From the Oddworld: Abe's Odyssey video game In Oddworld: Abe's Oddysee you play as a slave worker at a meat processing factory called Rupture Farms, and you just found out your people are next in line to become a new Rupture Farms treat.

As Abe, the Mudokon slave worker, you try to escape the factory while freeing as much Mudokons as you can along the way before you head out on your quest to bring down Rupture Farms and restore your people. Abe's Oddysee is a very underplayed game. It has a compelling story, dark and mysterious game design, a sense of humor, and challenging gameplay.

Chateau Romani. From The Legend of Zelda: Majora's Mask video game Zelda is my all time favorite video game series so I'm pretty excited to be posting another Zelda recipe. My Zelda love extends pretty far. Sea Salt Ice Cream. From the Kingdom Hearts II video game I've never made ice cream before, so I did you guys a favor and found this recipe elsewhere. This ice cream mixes the salty taste of sea salt with the sweet tastes of cream and sugar. The Geeky Chef. Elven Lembas Bread. From the Lord of the Rings Trilogy by J.R.R Tolkien. Pumpkin Pasties. From the Harry Potter series by J.K. Submission: Gurdyroot Infusion. From Harry Potter by J.K. Rowling I was very excited to be contacted by Geek & Sundry! The Geeky Chef. Laura Moon's Chili. From American Gods by Neil Gaiman Continuing with another more obscure dish, this one appeared in Neil Gaiman's novel, "American Gods.