Flooding and Malaria - how and why? Flooding and communicable diseases fact sheet. 10 facts on malaria. Epidemics after Natural Disasters. Haiti faces famine and disease in aftermath of hurricane. Xinhua News Agency/REX/Shutterstock By Debora MacKenzie Haiti is bracing itself for a surge in starvation and disease after hurricane Matthew hit the west of the country on 4 October. 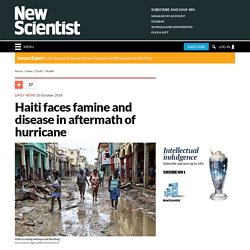 Nearly 1000 people have been killed by the storm itself, but the death toll could rise sharply as the knock-on effects of the devastation take hold. In the country’s hard-hit southern peninsula, crops were destroyed, livestock swept away, and irrigation and fishing infrastructure damaged. That is serious in the Western Hemisphere’s most impoverished nation, where most people are subsistence farmers. UNICEF Moçambique. Zambezia - “The water came suddenly in the middle of the afternoon”, says Nita Alves, recalling the day her village was flooded a couple of weeks ago. 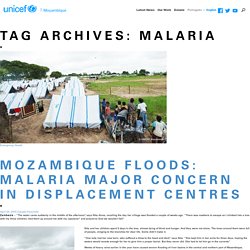 “There was nowhere to escape so I climbed into a tree with my three children, tied them up around me with my capulana* and prayed to God we wouldn’t fall.” Nita and her children spent 5 days in the tree, almost dying of thirst and hunger. And they were not alone. The trees around them were full of people, clinging to the branches for dear life. Pakistan floods devastating: Red Cross. An Australian aid worker in Pakistan has spoken of the devastation left behind the "huge great wave" of flooding. 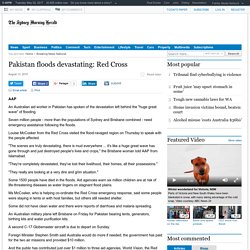 Seven million people - more than the populations of Sydney and Brisbane combined - need emergency assistance following the floods. Louise McCosker from the Red Cross visited the flood-ravaged region on Thursday to speak with the people affected. "The scenes are truly devastating, there is mud everywhere ... it's like a huge great wave has gone through and just destroyed people's lives and crops," the Brisbane woman told AAP from Islamabad. 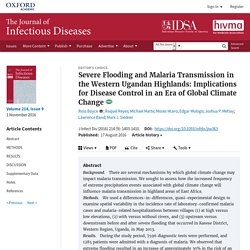 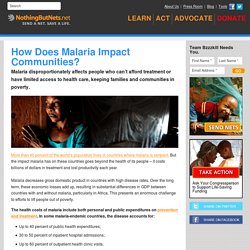 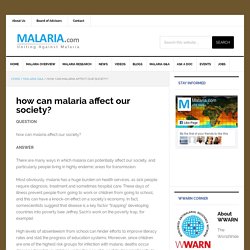 There are many ways in which malaria can potentially affect our society, and particularly people living in highly endemic areas for transmission. Most obviously, malaria has a huge burden on health services, as sick people require diagnosis, treatment and sometimes hospital care. These days of illness prevent people from going to work or children from going to school, and this can have a knock-on effect on a society’s economy. In fact, somescientists suggest that disease is a key factor “trapping” developing countries into poverty (see Jeffrey Sach’s work on the poverty trap, for example). High levels of absenteeism from school can hinder efforts to improve literacy rates and stall the progress of education systems. South Sudan: Overcrowded camp threatened by upcoming rains. Infectious diseases in the aftermath of monsoon flooding in Pakistan. At least 1,000 displaced following floods in Uganda.

Following torrential rains, fresh floods have started hitting Kasese destroying roads Many people in parts of Western and Southern Uganda faced severe flood conditions as a result of a result of heavy rainfall that began on 13 April 2016. 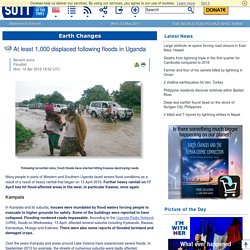 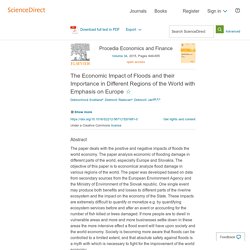 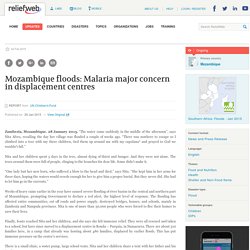 “The water came suddenly in the middle of the afternoon”, says Nita Alves, recalling the day her village was flooded a couple of weeks ago. “There was nowhere to escape so I climbed into a tree with my three children, tied them up around me with my capulana* and prayed to God we wouldn’t fall.” Nita and her children spent 5 days in the tree, almost dying of thirst and hunger. CDC - Malaria - Malaria Worldwide - Impact of Malaria. The most vulnerable are persons with no or little immunity against the disease. 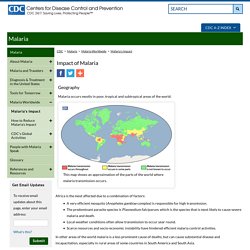 In areas with high transmission (such as Africa south of the Sahara), the most vulnerable groups are: Young children, who have not yet developed partial immunity to malaria Pregnant women( whose immunity is decreased by pregnancy, especially during the first and second pregnancies Travelers or migrants coming from areas with little or no malaria transmission, who lack immunity. In areas with lower transmission (such as Latin America and Asia), residents are less frequently infected. Many persons may reach adult age without having built protective immunity and are thus susceptible to the disease, including severe and fatal illness. 150,000 Stranded Kashmiris Face Disease Outbreak After Historic Floods. It’s not over yet. Between 150,000 and 200,000 people are stuck in partially underwater buildings nearly two weeks after torrential rains caused major flooding in the Himalayan region of Kashmir and eastern Pakistan, according to local media reports.

And the proximity of so many people to dirty, stagnant water is increasing fears that an outbreak of waterborne disease is on the horizon. “Stagnant water is much more dangerous than flowing water,” Dr. Zimbabwe floods 'cause spike in malaria cases' Harare - Health authorities in Zimbabwe are stepping up the distribution of anti-malarial drugs after 151 malaria deaths were recorded in the last two months, the Sunday Mail said. At least 89 261 malaria cases have been recorded during that period, Zimbabwe's health ministry says.

The newspaper says a regional malaria outbreak is due to the "incessant rains experienced in the region in recent months. " Malaria threatens 2 million in Pakistan as floodwaters turn stagnant. More than 2m cases of malaria are expected in Pakistan in the coming months in the wake of the country's devastating floods, aid workers have warned. Two months into the crisis, large areas remain submerged in southern Sindh province, creating stagnant pools of standing water that, combined with the heat, are powerful incubators of a disease spread by mosquitoes that breed and hatch in the pools. More than 250,000 cases of suspected malaria, including some of the fatal falciparum strain, have been reported, according to the World Health Organisation. Aid agency Plan International worries the figure will surpass 2m. "The most vulnerable are women and children," said its Pakistan director, Haider Yaqub.

Researchers from Griffith University and the Gold Coast University Hospital have now developed the vaccine to "whole blood stage". This means they have shown the vaccine is safe for humans to take and for human tests to go ahead. One of the researchers – Griffith University's Professor Michael Good – is so convinced it is safe he has become the first person to inoculate himself with the trial vaccine. Malaria causes fatigue, fever, seizures and, if untreated, coma and death in almost half of the world. Knowledge and perceptions about malaria in communities in four districts of the Central African Republic.

Australian world first as malaria vaccine passes human trial. In a world first a new malaria vaccine developed by Australian scientists has passed its first test in early human trials. The vaccine, called PlasProtecT, developed by researchers at Queensland's Griffith University consists of inactivated human malaria parasites which have been prevented from growing and causing a malaria infection. The vaccine works by stimulating a natural immune response which can protect a person for years against the mosquito-borne disease. Lead researcher Michael Good, an immunologist with Griffith's Institute for Glycomics, was the first person to be immunised. "I wouldn't ask people to do what I wouldn't be prepared to do, and we couldn't do this without the volunteers who give their time to us knowing they are helping further work towards a cure," Prof Good said.

Feature: Flooding hampers malaria prevention in Namibia. WINDHOEK, March 17 (Xinhua) -- Important strides have been made to fight malaria in Namibia, which mainly affects people living in remote rural areas in the northern parts, but the recent heavy rains have put a damper on those strides. Severe Flooding and Malaria Transmission in the Western Ugandan Highlands: Implications for Disease Control in an Era of Global Climate Change. Skip to Main Content. World Malaria Day, 25 April 2017. Zimbabwe floods 'cause spike in malaria cases' Flooding&malariatranmession.diseasecontrolUganda. Ghana: Storm Drains and Malaria. Climate change and malaria. 'Completely unlivable': Climate change pushing humans, other species to the brink. Human societies and a multitude of species are going to be tested by climate change in ways that are barely understood, a wide-ranging study involving researchers from 44 institutions around the world has found.

Species in every ecosystem are being affected by rising temperatures and shifting rainfall patterns, with marine animals moving poleward at the average pace of 72 kilometres and land-based ones 17 kilometres a decade, according to the paper published on Friday in the journal Science. "Movement of mosquitoes in response to global warming is a threat to health in many countries through predicted increases in the number of known, and potentially new, diseases," the paper found, noting malaria is already a risk for about half of humanity, with more than 200 million cases recorded in 2014 alone. Food security is also at risk from the spread of plant pathogens and other pests.

While some species can adapt by moving either to higher ground or cooler waters, not all can. IPCC - Intergovernmental Panel on Climate Change. El Nino and its health impact. Every few years, an unusually warm current flows off the western coast of South America. SBCCWG — Roll Back Malaria. Working Group Secretariat: Amazon Malaria Initiative. AMI Annual Report 2015 September 28, 2016 The initiative-wide annual report is an extended report that covers AMI implementing partners' activities from FY2015 and the first two quarters of FY2016. The report was completed in a collaborative fashion, with input from AMI implementing partners.

It is organized into three sections: epidemiological overview of malaria in LAC, technical areas of intervention, and challenges and opportunities. Download the full report. Training Manual on RDT Use and Thick Blood Smear in PeruSeptember 9, 2016 An illustrated manual on the use of RDTs and Thick Blood Smear was developed for use in Peru. In addition, instructions on Thick Blood Smear collection were provided on a separate manual. Cdc malaria program 508. About the WHO Global Malaria Programme. Preventing and controlling infectious diseases after natural disasters - United Nations University. Kouadio Koffi Isidore, Syed Aljunid, Taro Kamigaki, Karen Hammad and Hitoshi Oshitani.