Teaching “The Great Debaters” “The Great Debaters” is an inspiring story of courage, creativity and resolve. Debate begins with a resolution. It starts with a point to prove. It is a form of battle, fought with words. A great quote from the movie is: “Now is always the right time to do the right thing.” One of the most important lessons in The Great Debaters is found in one of its memorable lines: “We do what we got to do, so we can do what we want to do.” Pre-study activities: I plan to use The Question Formulation Technique here. Watch the movie! After- movie activities and discussion topics: Did the movie answer any of your questions? Like this: Like Loading... Related Teaching short stories by Roald Dahl Pre-study activities: To learn about Roald Dahl and his writing. In "Lesson plans" What Can the World Learn from Educational Change in Finland?

I have just read this book by Pasi Sahlberg. What Is the American Dream: History, Quotes. The American Dream is the ideal that the government should protect each person's opportunity to pursue their own idea of happiness. The Declaration of Independence protects this American Dream. It uses the familiar quote: "We hold these truths to be self-evident, that all men are created equal, that they are endowed by their Creator with certain unalienable Rights, that among these are Life, Liberty and the pursuit of Happiness. " The Declaration continued, "That to secure these rights, Governments are instituted among Men, deriving their just powers from the consent of the governed. " Le Selfie, nouvel art de l'autoportrait. 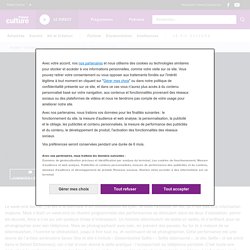 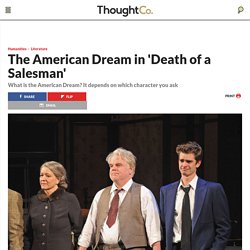 The "rags to riches" idea—where hard work and persistence, coupled with high hopes and inner and outer struggles that often accompany it, should lead to success—seems timelessly relatable and represents one of the central themes of the story. Miller fabricated the character of a salesman without an identified product, and the audience connects with him that much more. Creating a worker broken by a vague, unfeeling industry stems from the playwright’s socialist leanings, and it has often been said that "Death of a Salesman" is a harsh criticism of the American Dream.

However, according to Miller, the play is not necessarily a critique of the American Dream as our forefathers thought of it. Willy Loman’s American Dream BIFF: I Crossed my eyes and talked with a lithp.​​ WILLY [laughing]: You did? The Great Gatsby and the American dream. In the New York Times earlier this year, Paul Krugman wrote of an economic effect called "The Great Gatsby curve," a graph that measures fiscal inequality against social mobility and shows that America's marked economic inequality means it has correlatively low social mobility. 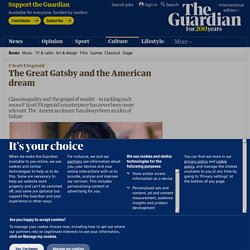 In one sense this hardly seems newsworthy, but it is telling that even economists think that F Scott Fitzgerald's masterpiece offers the most resonant (and economical) shorthand for the problems of social mobility, economic inequality and class antagonism that we face today. Graffiti: Art or vandalism? Lesson plan the great debaers. Life of Pi Theory. Take any O’Henry short story and you will find a twist in the end, a literary jack-in-the-box. 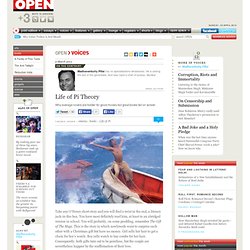 You have most definitely read him, at least in an abridged version in school. You will probably, on some prodding, remember The Gift of The Magi. This is the story in which newlyweds want to surprise each other with a Christmas gift but have no money. Girl sells her hair to get a chain for boy’s watch. Boy sells watch to buy combs for her hair.

O’Henry springs it using deft dialogue and imagery—‘White fingers and nimble tore at the string and paper. As a novel, Life of Pi is average pseudo spiritual fare with one big idea of the allegory. Another hour of slavery politics would still keep you riveted. It is, in fact, easy to make a good movie of an ordinary or even bad novel. A novel’s quality often does not matter to its movie adaptation because cinema works at the surface level—there is no sophisticated way to depict thought as thought.