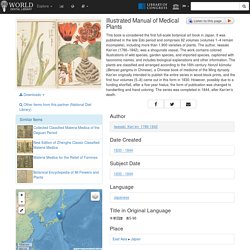 It was published in the late Edo period and comprises 92 volumes (volumes 1−4 remain incomplete), including more than 1,900 varieties of plants. The author, Iwasaki Kan’en (1786−1842), was a shogunate vassal. The work contains colored illustrations of wild species, garden species, and imported species, captioned with taxonomic names, and includes biological explanations and other information. The plants are classified and arranged according to the 16th-century Honzō kōmoku (Bencao gangmu in Chinese), a Chinese book of medicine of the Ming dynasty. Kan’en originally intended to publish the entire series in wood-block prints, and the first four volumes (5−8) came out in this form in 1830. 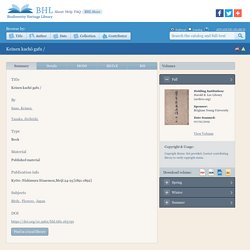 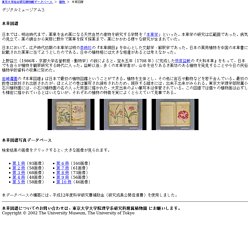 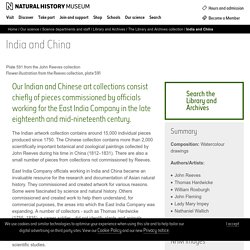 The Indian artwork collection contains around 15,000 individual pieces produced since 1750. The Chinese collection contains more than 2,000 scientifically important botanical and zoological paintings collected by John Reeves during his time in China (1812–1831). There are also a small number of pieces from collections not commissioned by Reeves. East India Company officials working in India and China became an invaluable resource for the research and documentation of Asian natural history. They commissioned and created artwork for various reasons. While Hardwicke's collection is still extensive, it is believed to have originally been almost three times its current size. 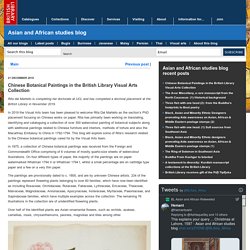 In 2019 the Visual Arts team has been pleased to welcome Rita Dal Martello as the section’s PhD placement focusing on Chinese works on paper. Rita has primarily been working on translating, identifying and cataloguing a collection of over 300 watercolour painting of botanical subjects along with additional paintings related to Chinese furniture and interiors, methods of torture and also the Macartney Embassy to China in 1792-1794. This blog will explore some of Rita’s research related to the Chinese botanical paintings cared for by the Visual Arts team. In 1975, a collection of Chinese botanical paintings was received from the Foreign and Commonwealth Office comprising of 6 volumes of mostly quarto-size sheets of watercolour illustrations. Pale pink Japanese camellia (Camellia japonica) by an unknown Chinese artist, c.1800. Flora Japonica exhibition. Thanks to its geographical isolation and great diversity of climates, Japan is home to about 7,000 plant species of which approximately 40% are endemic. 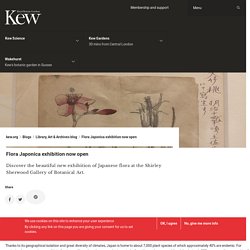 For centuries Japan was inaccessible to foreigners. Nowadays Japanese plants are to be found in gardens around the globe, but only 200 years ago they were virtually unknown to the outside world. Paintings in the new Flora Japonica exhibition Exhibition highlights Flora Japonica showcases amazingly detailed historic drawings and paintings of Japan’s native flora by Tomitaro Makino, known as the father of Japanese botany. Nerium oleander var.indicum by Tomitaro MakinoMitrastemon yamamotol by Tomitaro Makino. 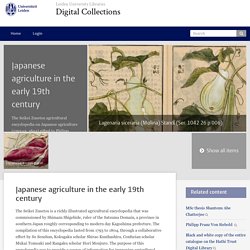 The compilation of this encyclopedia lasted from 1793 to 1804, through a collaborative effort by So Senshun, Kokugaku scholar Shirao Kunihashira, Confucian scholar Mukai Tomoaki and Rangaku scholar Hori Monjuro. The purpose of this encyclopedia was to provide a source of information for improving agricultural production in Southern Japan. Improvements refer to the expansion, diversification, and maximization of agricultural production. Although the original encyclopedia consisted of a hundred volumes at the time of completion, seventy wooden printing blocks were destroyed in two major fires, leaving only thirty volumes to be published. Famous Asian Botanical Artists - BOTANICAL ART & ARTISTS. Fall - Keinen kachō gafu / Xiao mie wen ying de ye sheng zhi wu.