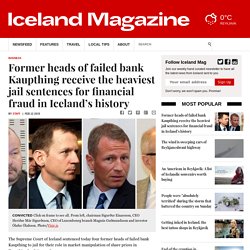 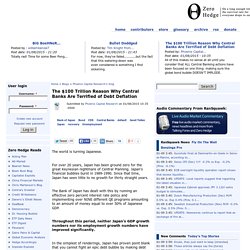 For over 20 years, Japan has been ground zero for the great Keynesian nightmare of Central Planning. Japan’s financial bubbles burst in 1989-1990. Since that time, Japan has seen little to no growth for thirty straight years. The Bank of Japan has dealt with this by running an effective zero percent interest rate policy and implementing over NINE different QE programs amounting to an amount of money equal to over 50% of Japanese GDP. Throughout this period, neither Japan’s GDP growth numbers nor its employment growth numbers have improved significantly.

“Riddles” Surround 36th Dead Banker Of The Year. 52-year-old Belgian Geert Tack – a private banker for ING who managed portfolios for wealthy individuals – was described as ‘impeccable’, ‘sporty’, ‘cared-for’, and ‘successful’ and so as Vermist reports, after disappearing a month ago, the appearance of his body off the coast of Ostend is surrpunded by riddles… Tack disappeared on November 5th… Impeccable. 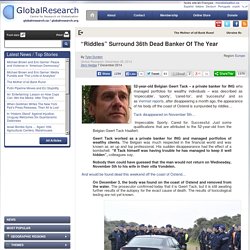 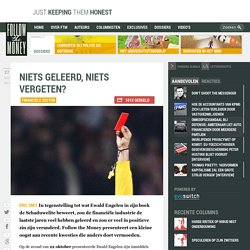 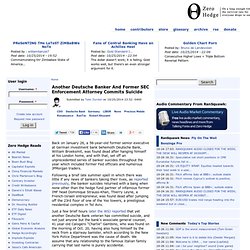 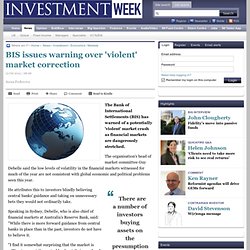 The organisation's head of market committee Guy Debelle said the low levels of volatility in the financial markets witnessed for much of the year are not consistent with global economic and political problems seen this year. There are a number of investors buying assets on the presumption of a level of liquidity which is not there He attributes this to investors blindly believing central banks' guidance and taking on unnecessary bets they would not ordinarily take. Speaking in Sydney, Debelle, who is also chief of financial markets at Australia's Reserve Bank, said: "While there is more forward guidance from central banks in place than in the past, investors do not have to believe it. The Incredible 'Wussiness' Of The Fed Vs Goldman Sachs—Caught On Tape. The charm is simple, natural, free-flowing. 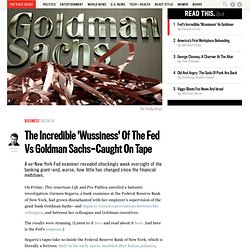 And yes, he is as good-looking in real life. If he wasn't so damned nice, so damned hot, engaging and intelligent, it would be easy to resent, envy and wish hailstorms of frogs on George Clooney. But there's no point. The frogs would rain down on him, land with a plop, gaze up at his smile and become princes. American gangsters! Matt Taibbi & Max on suckers buying bogus & big bank mass perjury.

European IMF directors protected the banks, but hit the Greeks. The European Union has succeeded in dragging the IMF into the consecutive bailout programs of Greece. 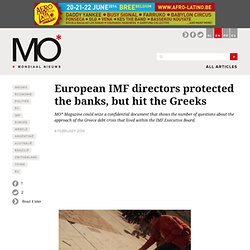 As such, the IMF was asked stand-by arrangement of thirty billion euro's in the spring of 2010. However, many non-European countries questioned this approach, as says the office memorandum (of May 10, 2010) on the Executive Board's meeting dealing with the Greek aid request. But because seven of the twenty-four executive directors (ED's) are EU-members, plus the managing director who presides the meeting, the EU is very influential in the decision-making process. As it turns out, the EDs from Germany, Belgium, Spain, the Netherlands, France en Denmark delivered a joint statement pro IMF-support to Greece at the board meeting. Banks evade responsibility. Iran billionaire executed over $2.6B bank fraud.

TEHRAN, Iran (AP) — A billionaire businessman at the heart of a $2.6 billion state bank scam in Iran, the largest fraud case since the country's 1979 Islamic Revolution, was executed Saturday, state television reported. 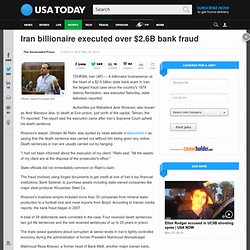 Authorities put Mahafarid Amir Khosravi, also known as Amir Mansour Aria, to death at Evin prison, just north of the capital, Tehran, the TV reported. The report said the execution came after Iran's Supreme Court upheld his death sentence. Khosravi's lawyer, Gholam Ali Riahi, was quoted by news website khabaronline.ir as saying that the death sentence was carried out without him being given any notice. Death sentences in Iran are usually carried out by hanging. Russia Is Dominated By Global Banks, Too. Numerous cultures have had holidays dedicated to the celebration of pulling the wool over the eyes of others, from the ancient Romans, to early Muslims, to medieval Christians, to Americans and Europeans today. 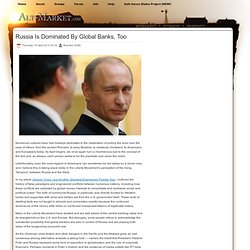 As April begins, we once again turn a mischievous eye to the concept of the fool and, as always, each person seeks to be the prankster and never the victim. Unfortunately, even the most vigilant of Americans can sometimes be led astray by a clever ruse, and I believe this is taking place today in the Liberty Movement’s perception of the rising “tensions” between Russia and the West. In my article Ukraine Crisis: Just Another Globalist-Engineered Powder Keg, I outlined the history of false paradigms and engineered conflicts between numerous nations, including how these conflicts are exploited by global money interests to consolidate and centralize social and political power.

Billions in hidden subsidies going to too-big-to-fail banks. By Stephen Letts Updated As the first round of submissions to the Federal Government's Financial Systems Inquiry closed this week there was a timely reminder that the fundamental cause of the global financial crisis is still deeply embedded in the banking system. Document: JPMorgan Chase Bets .4 Billion on the Early Death of Workers. By Pam Martens and Russ Martens: March 24, 2014 (Left) JPMorgan's European Headquarters at 25 Bank Street, London Where Gabriel Magee Died on January 27 or January 28, 2014 Under Suspicious Circumstances Families of young JPMorgan Chase workers who have experienced tragic deaths over the past four months, have been kept in the dark on many details, including the fact that the bank most likely held a life insurance policy on their loved one – payable to itself.

Banks in the U.S., as well as other corporations, are allowed to make multi-billion dollar wagers that their profits from life insurance policies on employees will outstrip the cost of paying premiums and other fees. Early deaths help those wagers pay off. SonyKapoor : The “Revolving Door” that... Bank Run Full Frontal: Ukrainians Withdrew 7% Of All Deposits In Two Days. Well that escalated quickly. It seems the ouster of Yanukovych, heralded by so many in the West as a positive, has done nothing to quell the fear of further economic collapse in Ukraine: This is around a 30 billion Hyrvnia loss (over $3 billion) in just 2 days for the banks and the new central bank chief is considering "stabilizing loans" to help banks deal with the liquidity crisis (though Ukraine's reserves stand at a mere $15 billion). Gangster Bankers: Too Big to Jail. I Crashed a Wall Street Secret Society.

The EU is looking for ways to wean the 28-country bloc from its heavy reliance on bank financing and find other means of funding small companies, infrastructure projects and other investment. "The economic and financial crisis has impaired the ability of the financial sector to channel funds to the real economy, in particular long-term investment," said the document, seen by Reuters.

The Commission will ask the bloc's insurance watchdog in the second half of this year for advice on a possible draft law "to mobilize more personal pension savings for long-term financing", the document said. Banks have complained they are hindered from lending to the economy by post-crisis rules forcing them to hold much larger safety cushions of capital and liquidity.