The Families Funding the 2016 Presidential Election. By NICHOLAS CONFESSORE, SARAH COHEN and KAREN YOURISH They are overwhelmingly white, rich, older and male, in a nation that is being remade by the young, by women, and by black and brown voters. 40 charts that explain money in politics. A new experiment shows how money buys access to Congress. A new paper just released today by two political science graduate students, David Broockman and Josh Kalla, is already getting attention. 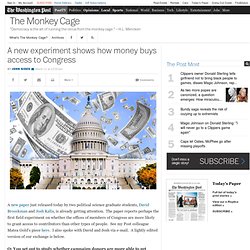 The paper reports perhaps the first field experiment on whether the offices of members of Congress are more likely to grant access to contributors than other types of people. See my Post colleague Matea Gold’s piece here. I also spoke with David and Josh via e-mail. A lightly edited version of our exchange is below. Q: You set out to study whether campaign donors are more able to get access to senior congressional officials. Candidates and super PACs can’t coordinate. Here’s their silent workaround. Deep in Alex Leary's thorough look last week at the Florida special election in the Tampa Bay Times is a gem about how campaigns and outside groups can communicate without, well, communicating: Tucked away on Sink's YouTube page is professionally shot video showing her talking with people at a café, walking with a man on the sidewalk and sitting with a young mother at a playground. 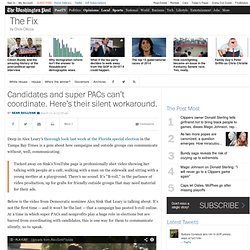 Behind the Curtain Exclusive: The Koch brothers’ secret bank. An Arlington, Va. 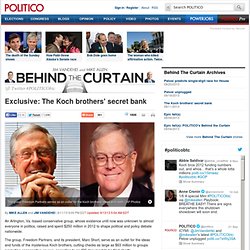 -based conservative group, whose existence until now was unknown to almost everyone in politics, raised and spent $250 million in 2012 to shape political and policy debate nationwide. The group, Freedom Partners, and its president, Marc Short, serve as an outlet for the ideas and funds of the mysterious Koch brothers, cutting checks as large as $63 million to groups promoting conservative causes, according to an IRS document to be filed shortly. Continue Reading Inside Koch brother's secret bank Obama holds cabinet meeting on Syria, health care. Call Time For Congress Shows How Fundraising Dominates Bleak Work Life. WASHINGTON -- Welcome to town, new members of Congress. 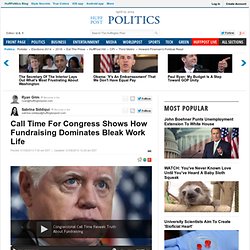 Now hit the phones. For an incoming member of Congress still basking in the glow of electoral victory, it's a message that hits those in both parties hard -- the most direct indication that time in the people's chamber will be a bit different from the version taught in civics classes. For new Democrats, that message was delivered on Nov. 16, barely a week after the election, at an incoming-member orientation held by the House campaign arm. Cost to win congressional election skyrockets. Average cost of winning elections in the House and Senate since 1986 in 2012 dollars Spending on winning Senate races has increased 62% in 2012 dollars since 1986The increase is more pronounced in the House, where winning a race there increased by 334%Biggest increase is in outside groups, which went from $9 miilion in 1986 to $457 million in 2012 (CNN) -- Cory Booker raised an eye-popping $4.6 million over the past three months for his bid in the New Jersey special election for the U.S. 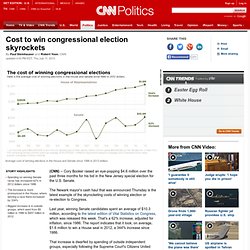 Senate. The Newark mayor's cash haul that was announced Thursday is the latest example of the skyrocketing costs of winning election or re-election to Congress. Last year, winning Senate candidates spent an average of $10.3 million, according to the latest edition of Vital Statistics on Congress, which was released this week. That increase is dwarfed by spending of outside independent groups, especially following the Supreme Court's Citizens United decision in 2010. Post-Watergate campaign finance limits undercut by changes. “The decision was made that it was time to put the hay in,” John Dean, Nixon’s counsel at the time, recalled in an interview last week. 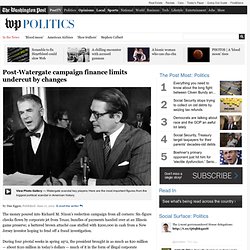 “A lot of us believe Watergate might never have happened without all that money sloshing around.” Four decades later, there’s little need for furtive fundraising or secret handoffs of cash. Many of the corporate executives convicted of campaign-finance crimes during Watergate could now simply write a check to their favorite super PAC or, if they want to keep it secret, to a compliant nonprofit group.

Corporations can spend as much as they want to help their favored candidates, no longer prohibited by law from spending company cash on elections. What You Need to Read on Money & Politics. Two years ago, the Supreme Court changed the landscape of campaign finance with a controversial decision in a case known as Citizens United. 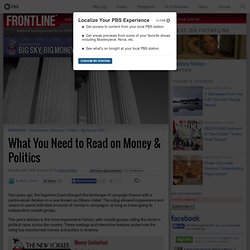 The ruling allowed corporations and unions to spend unlimited amounts of money in campaigns, so long as it was going to independent outside groups. This year’s election is the most expensive in history, with outside groups calling the shots in political races across the country. These readings and interactive features probe how the ruling has transformed money and politics in America.