Out of the six genes unequivocally linked to heritable, monogenic PD, mutations in SNCA (PARK1 = 4), and LRRK2 (PARK8) are responsible for autosomal-dominant PD forms.

Α-Synuclein in Parkinson's Disease. G 1006 buchman alpha synuclein. Α-Synuclein and neuronal cell death. Aspects of protein chemistry of α-synuclein and toxicity α-Synuclein has a strong tendency to self-associate in vitro [110, 111], and so a prime candidate for the underlying driving force for toxicity is the formation of aggregated species. 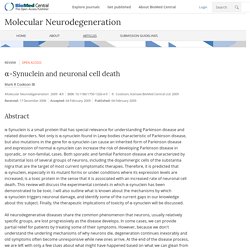 One of the important questions about this idea is which species are present in cells/tissues. Oligomeric species can be isolated from cells [112, 113, 114] and from human [21] and mouse (both wild type and α-synuclein transgenic) brain [115]. In both cells and brain, oligomers are particularly found in membrane-enriched fractions [112, 115], suggesting a possible influence of the lipid environment on oligomer formation. Α-Synuclein in Parkinson's Disease.