Beetle soup : Australian stories and poems for children / compiled by Robin Morrow ; illustrated by ... YouTube. Developing early literacy : assessment and teaching / Susan Hill. Montessori Australia. Montessori is an approach to supporting the full development of the human being. 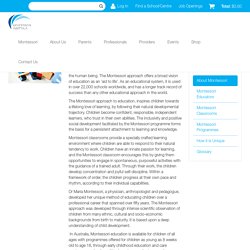 The Montessori approach offers a broad vision of education as an ‘aid to life’. As an educational system, it is used in over 22,000 schools worldwide, and has a longer track record of success than any other educational approach in the world. The Montessori approach to education, inspires children towards a lifelong love of learning, by following their natural developmental trajectory. Children become confident, responsible, independent learners, who trust in their own abilities.

The inclusivity and positive social development facilitated by the Montessori programme forms the basis for a persistent attachment to learning and knowledge. Montessori classrooms provide a specially crafted learning environment where children are able to respond to their natural tendency to work. Watch a video: Why choose Montessori education for your child? 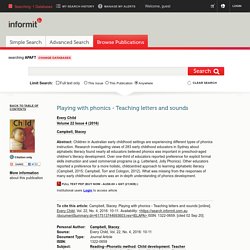 Research investigating views of 283 early childhood educators in Sydney about alphabetic literacy found nearly all educators believed phonics was important in preschool-aged children's literacy development. Over one-third of educators reported preference for explicit formal skills instruction and used commercial programs (e.g. Letterland, Jolly Phonics). Other educators reported a preference for a more holistic, childcentred approach to learning alphabetic literacy (Campbell, 2015; Campbell, Torr and Cologon, 2012). What was missing from the responses of many early childhood educators was an in-depth understanding of phonics development. Qklg pd lit phonics. SAGE Publications Australia. What do you think?

Why the focus on phonics? Teachers TV: Phonics. New phonics test will do nothing to improve Australian children's literacy. Minister Birmingham released a report today recommending that all Year 1 students in Australia complete a phonics test. 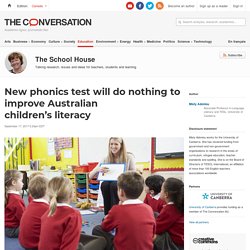 The panel responsible for the report has recommended that Australia adopt the Year 1 phonics screening check that has been used in England since 2011. What is phonics? Phonics is the process of matching sounds to letters. It is an important skill when learning to read and write in English. There are two main approaches to teaching children phonics - synthetic phonics and analytic phonics. Analytic phonics starts with taking a word that children know the meaning of, and then analysing it to see how the sounds in the word match the letters we see within the word.

Synthetic phonics starts with letters which the children learn to match with sounds. Which phonics method is better? There is no evidence that one phonics approach is better than the other. What is the phonics test? The phonics test is based on synthetic phonics. Why are we introducing it? What does the research say? [PDF] Synthetic phonics and the teaching of reading: the debate surrounding England's ‘Rose Report’ Seven things to consider before you buy into phonics programs. Phonics, or teaching reading, writing and spelling through sounds, is often touted as the golden path to reading and writing. 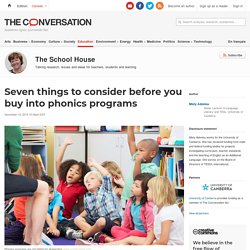 National curricula in England and Australia have been rejigged to increase their focus on phonics, and entrepreneurs and publishers have rushed to fill the space with phonics programs and resources. But before you buy their wares, consider the following. 1. English is not a phonetic language This may be an inconvenient truth for those promoting phonics programs, but English is not a phonetic language and never has been. English began about 1500 years ago as a trio of Germanic dialects brought over to the islands we now know as the British Isles. The Latin alphabet was a good phonetic match for spoken Latin, but it was not a good match for spoken Old English. There were sounds in Old English that simply didn’t exist in spoken Latin, so there were no Latin letters for them.